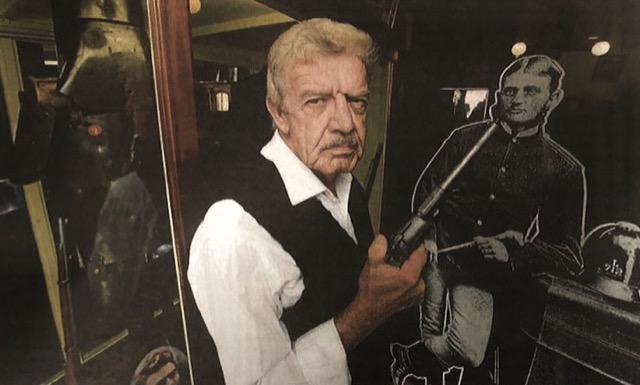 Last weekend at Chiltern, which is up the road from Wangaratta, there was a fund raiser for a local museum in the form of a kind of Kelly symposium. The promo advertised that there would be talks given by four notorious Kelly apologists, Brad Webb, Paul O’Keefe, Alan Crichton and Steve Jager, as well as a showing of an ancient Kelly documentary featuring Ian Jones, and talks by Noeleen Lloyd and Noeleen Allan. According to Eventbrite, barely 50 people attended.

Alan Crichton ( seen above with gun in hand and cardboard cut-out of Fitzpatrick) had signalled well in advance that he was going to be presenting what he himself calls a conspiracy theory about Alexander Fitzpatrick, the Constable that was shot at by Ned Kelly when he went to arrest Dan Kelly at the Kelly home in April 1878. Crichton claimed recently that Fitzpatrick was ‘an arsehole from the moment he popped out of the womb’ and so his entirely unsustainable conspiracy theory greatly appeals to Kelly fanatics because they all hate Fitzpatrick with a vengeance. I exposed the gaping holes in Crichtons theory in a series of six brilliant posts to this blog last year. The first one is HERE.

Ive read Brad Webbs pathetic book Ned Kelly :Iron Outlaw  ( reviewed HERE) so had no interest in what he might have wanted to talk about at Chiltern, but suspect it might have been the same talk he’s given a couple of times before and can be read on his web site.

Paul O’Keefe the one-time “Neducator” , and internet bully was going to talk about his claim that Ettie Hart was Ned Kellys secret lover, a claim he’s been making at talks for several years. He has never been confident enough to commit his evidence for those claims to print or to defend them anywhere, but as I had never heard his talk, decided I might go to Chiltern to hear it. However, late in the piece it was announced that he had withdrawn from the seminar, so in the end I decided not to go. I am wondering if he didn’t want me to hear it.

Steve Jager, self-described Kelly historian and one-time Historical consultant to the now shelved attempt to make a movie about Glenrowan, presented a talk entitled “Proclamation of North East Victoria” Afterwards on Facebook he received many pats on the back from Kelly apologists who werent there for the talk, but I have no doubt if he was espousing the  Kelly apologists fondly held false belief that Ned Kelly was planning to proclaim a republic of north east Victoria, Ian Jones theory from 1967, then no doubt they would have all loved it. It doesn’t matter to this so-called ‘historian’ or to his mates that Dr Stuart Dawson comprehensively debunked that theory in the free book you can download by clicking on the image at top right of this page. Instead, I would guess like Crichton and Webb before him the same day, he just repeated another tranche of the innumerable lies and false unhistorical claims that constitute the fanatics fantasy about Ned Kelly.

Now, over the years, many Kelly fanatics have messaged me directly or sent email to the Blog that wasn’t intended for publication but intended as harassment and abuse, bullying and intimidation. Webb, O’Keefe and Jager have all done it, and it continues to this day. But even though Ive  never encouraged it, or responded to any of the innumerable abusive Facebook messages Ive received over the years, I probably shouldn’t have been surprised  when this Facebook message appeared a couple of hours after Steve Jager gave his speech at Chiltern last weekend. It had been almost a year since his last message:

Ive always ignored him in the past but decided to respond:

Well done Steve. So I am guessing if youre confident thats what youve achieved you will be happy to provide a transcript of your talk?

For you  no.. for sympathizers, yes

Why didn’t you pick up your ticket?

ME
I’d already seen your talk and Crichtons as well, but not O’Keefes so when O’Keefe dropped out there was nothing worth coming all that way to listen to apart from Noeleens but I believe her transcript is going to be made widely available.Sorry you won’t send me a copy.

Steve Jager
I’m not sorry.. and nah you haven’t heard any of my talks as this was my first

Even if I sent it, you’d still twist the words such is your modus operandi

Null and void because you say so? And youre not willing to put your money where your mouth is? Pull the other one Steve! Stay in your Echo chamber and you’ll be fine. But cut back on the booze, that’s a really bad look

I had been sent a pic of Jager making his speech and another with his head thrown back, pouring booze down his throat. Why he decided at that moment to message me with his disrespectful taunt about Dr Dawsons work is for him to explain. But, as I said to him, if he was truly confident that what he delivered at Chiltern the other night was the destruction of Dawsons ‘bullshit essay’ then he needs to have the intestinal fortitude to step out of the safety of his echo-chamber into the real world and put it out there, to put his money where his mouth is. He has promised to send transcripts of the speech to quite a few people so I am hoping someone will forward me a copy before too long. He has also announced he will be delivering this speech elsewhere in Kelly country this year, so inevitably we will all eventually get to discover what the substance of his claims are. I am not expecting there to be even a dent in Dawson’s document, let alone something resembling its destruction, but we will see.

The idea that Dawson’s research is now null and void on the say-so of a Kelly fanatic is laughable. He has to put up, and let everyone decide for themselves, or shut up. What we are talking about here are the realities of Australian history, not a state secret that only the inner circle of Kelly nutjobs can be privy to. But like Jack Peterson, Crichton, Webb and O’Keefe before him, he will probably  neither put up, or shut up. That is the way of Kelly conspiracy theorists.