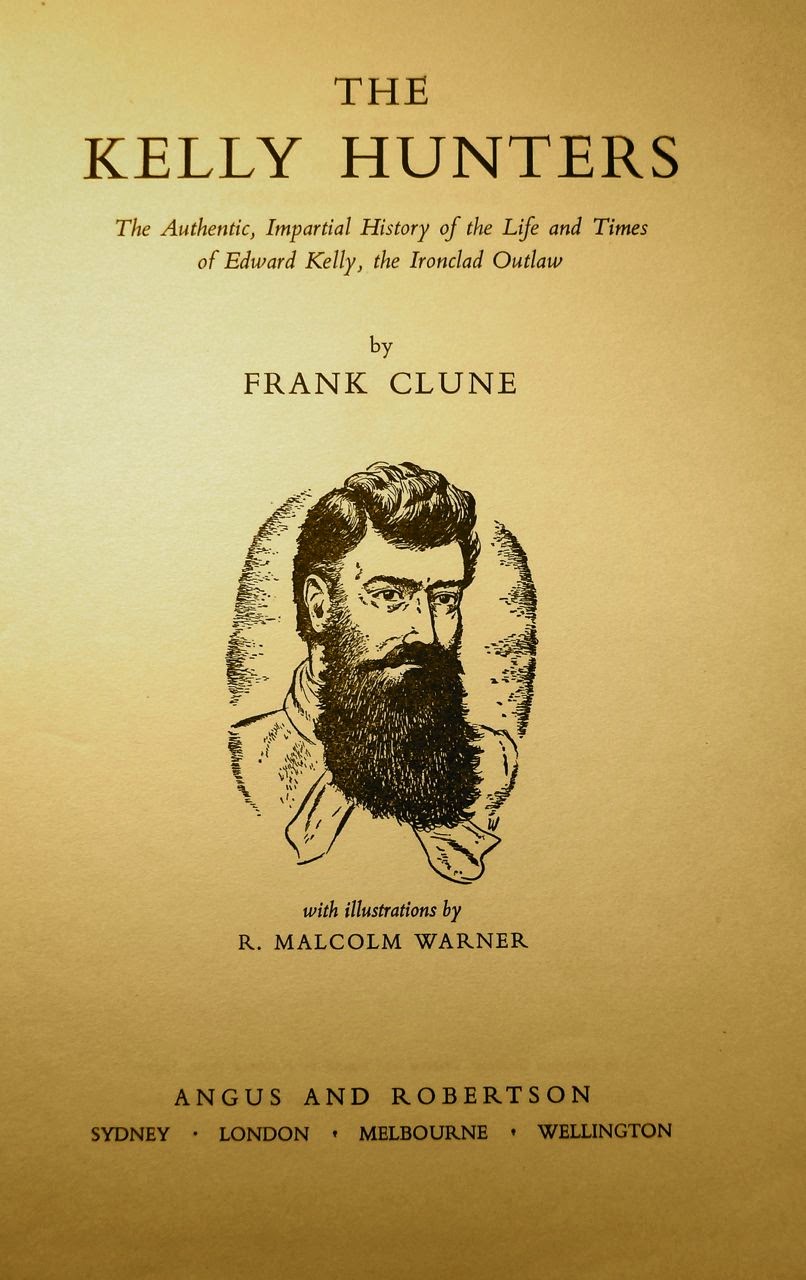 According to the review of this book by Frank Clune on the greatest Kelly website in the world, the author “sets out to tell the story his way and succeeds quite well”. It would have been useful to read what exactly is meant by “his” way, and why he manages it “quite” well rather than say “very” well but thats about all you get, other than the assessment that its worth 4 out of 5 “Kellys”. It also states that a hardcover copy in mint condition “will set you back a few dollars”
I found my hardback edition in the True Crime section of a large second-hand bookstore and it set me back $10, which is a “few” dollars I suppose.  Needless to say it wasn’t in mint condition, but I was very pleased to get it, and have been enjoying reading it the last few days.
I was particularly interested to read this book because it was published sixty years ago, 1954, and as you can see above was subtitled “ The Authentic, Impartial  History of the Life and Times Of Edward Kelly, the Ironclad Outlaw” .  I was interested to find out how the story was being told long before most of the Kelly books now available were written, well before the influence of writers like Ian Jones and Peter Fitzsimons, well before the greatest Kelly website in the world, and the internet itself came into existence, well before Mick Jagger and Heath Ledger glamourized Kellys life in  movies, and well before the 2000 Sydney Olympics gave the Kelly image a huge boost in the mind of the Australian public. There had only been a handful of publications on the Kelly outbreak till then – Max Browns “Australian Son” six years earlier, JJ Kinneallys “The Complete Inner History of the Kelly gang” from 1929, Chomleys 1900  “The True Story of the Kelly Gang of Bushrangers” are all listed in the Bibliography, but he also lists in his “Kellyana” at the end of the book a huge number of  references, serials and articles from magazines and newspapers, extending right back to 1880. My hope was that this account, having been written 60 years closer to the “outbreak” and well before the “modern” era of Kelly belief, and with an intention to be “impartial” might provide a better insight into the historical truths of the story, and some hints as to how it may have been evolving. 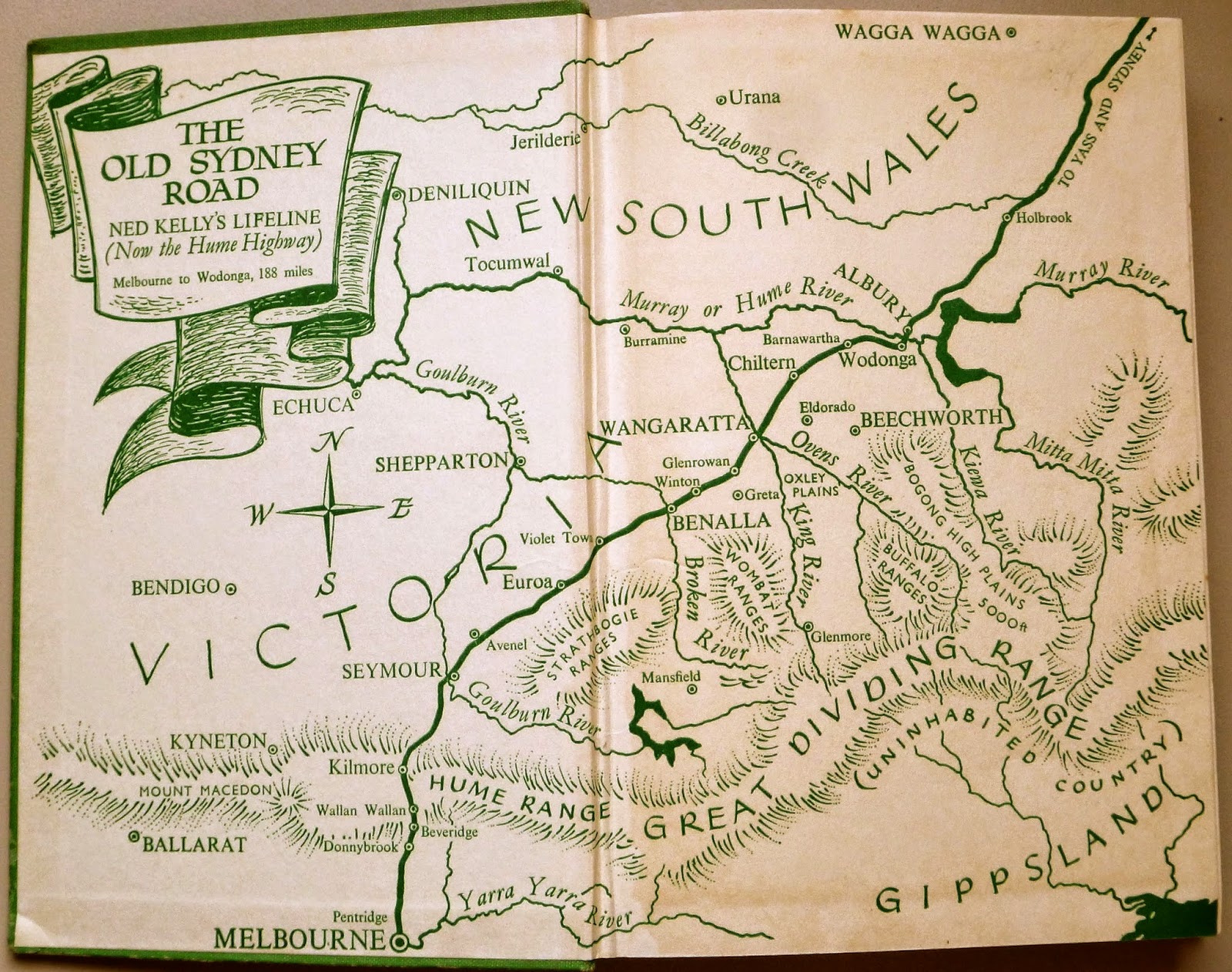 What I discovered were of course many surprising differences, additions and omissions from Kelly stories as told in the more recent works by people like Ian Jones and Peter  Fitzsimons. For example, the person Ned Kelly rescued from a flooded creek is an adult in this book, and theres no mention of the famous sash Kelly was presented with for saving him from drowning.  The punch-up between Ned Kelly and Wild Wright isn’t mentioned and neither is the accusation often leveled at Constable Fitzpatrick that he in some way molested Kate Kelly; the wound  Fitzpatrick received in the fracas at the Kellys’ is caused by knocking his wrist against a door-catch and no bullets are fired by anyone; there’s no mention of Red Kellys alcoholism and its role in the disintegration of his families’ prospects and in his premature death, and no mention of a role for  “sympathisers” at Glenrowan, either inside Ann Jones Inn or  lurking about in the darkness outside it.
However, the most notable difference,  in my view, is the complete absence from this book of any mention of a plan involving the founding of a “Republic of North East Victoria”, or of anything similar. This  notion is currently in favour among the believers as the ultimate objective, and the justification for the events that began with the murder of Aaron Sheritt. It was supposed to have ended not as it did with the siege at Glenrowan and the death of three of the gang and the capture of Ned Kelly, but with the carnage  of the planned train-wreck, and thereafter, somehow,  a popular rebellion and the establishment of a Republic of North East Victoria.  But even though the Republic idea had been discussed by Max Brown 6 years previously in “Australian Son”, unlike modern writers, Clune  was obviously not persuded that such a concept occupied the minds of the Kelly Gang, preferring to believe that what Ian Jones called the “madness” of the planned slaughter at Glenrowan was purely about revenge and about killing Police and the hated Black Trackers. Rather than a high Political ideal, according to Clune, the Glenrowan fiasco was prompted by the frustration of being on the run, and the fear of the massive rewards being offered causing someone to betray the Gang:
“The nervous strain of dodging invisible pursuers affected Neds morale and judgment…the Kellys had been reduced to desperation, not mainly by Nicolsons doings but by the presence of the Queensland Black Trackers, and by the bitter knowledge that some of their friends and relations, such as Pat Quinn, were willing to betray them for “blood money” The man they hated most was Aaron Sheritt….”
“For the Police, and especially for the Black Trackers and the secret agents they developed a burning hatred fanned by hours of talk among themselves on a topic that could never be forgotten by the hunted men – what move would the hunters make next? What cunning move?
Harassed they evolved a plan to take the initiative and strike a blow which would result in the wholesale slaughter of their foes”
I think Clune could  have also added into the mix of motivations, the gangs overblown and misplaced sense that they and the greater Kelly families were unjustly persecuted by Police. His view of the Gangs plans for Glenrowan accords more directly with the known facts, and I am sure is much closer to the truth, unpleasant as it is.
As for being the “impartial” history of the Kelly Gang, I thought Clune gave the game away before the book had even started, in describing Ned Kelly as the “Iron Outlaw” in the subtitle – a somewhat glamorous, flattering  and partial descriptor if ever there was one. Indeed, Clunes sympathies were clearly with the Gang, and at every opportunity the Government, the Police and squatters were routinely attacked, disbelieved, lampooned and  scorned:
“The Police force was constituted, like the Laws they enforced, not to protect the diggers but to protect those who legally preyed upon the diggers. The diggers could protect themselves against bushrangers and sneak thieves on the digging sbut they could not protect themselves against the law of the land, and against predatory business men and politicians.” P25
In contrast, the Kelly Gang mostly get the benefit of the doubt when it comes to ascribing motive, interpreting their actions and assessing outcomes, so for the Kelly sympathizer this book would be an enjoyable read, as the boot goes into the Police on a regular basis, and the heroism and courage of Ned Kelly is pointed out at every opportunity. However, his attempt to be impartial is not a complete failure and he paints a vivid and convincing picture of the events at Glenrowan that I enjoyed.
Overall this book is an interesting read but  of course theres nothing new in it. What it doesn’t say is as significant as what it does. What one realises on reading it in the 21st century is that though The Kelly Hunters is one of the books that contributed to the evolution of the Mythology about Ned Kelly, when it was first published that Mythology was still not fully developed. This book is a kind of “missing link” with evidence of the original truth, like a vestigial organ still visible for example in its views about Glenrowan, but there are hints of the developing Mythology as well, in its constant positive references to Ned Kelly and the negative attitudes to Police but as yet no sign of structures still to develop like the Republic.  The Kelly story has evolved considerably since  the 1950’s because, like evolution itself  Mythology seems to require the fog of time to really flourish. However in the 21st century the evidence now indicates that this evolutionary line is heading for extinction.
(Visited 79 times)
Comments (3)