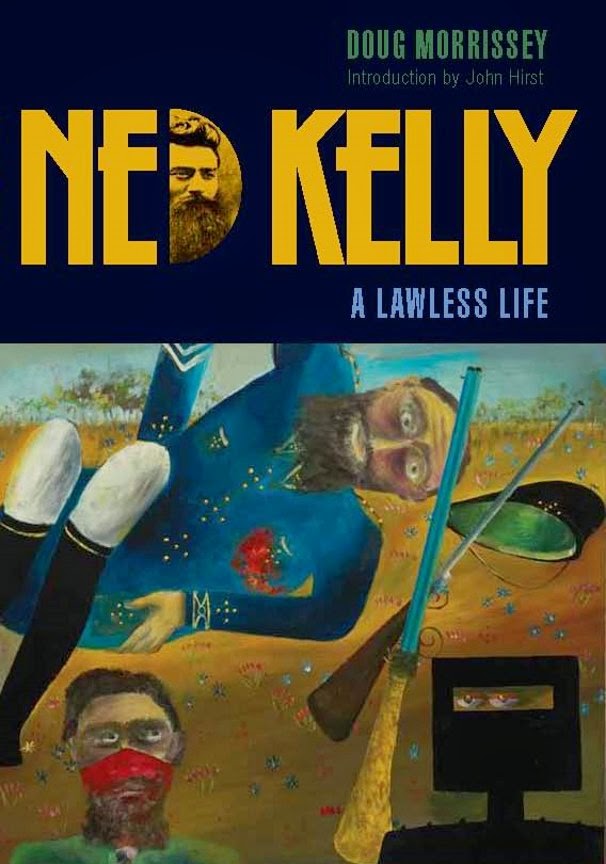 I think we can take it from its title, that in writing this book Doug Morrissey was taking aim first and foremost at the work of Ian Jones, a man Morrissey describes somewhat patronisingly I feel as “the best known of the myth-makers….despite his lack of academic credentials” The titles of these two authors major works are identical except that Morrissey inserts the unambiguous “Lawless” to  replace   Ian Jones  non-committal “Short” to indicate in no uncertain terms, right at the start exactly what he thinks about Ned Kellys “short life”.
Doug Morrisseys book on the life of Ned Kelly is the very latest in that crowded trail of Kellyana that started before Kelly was even dead. I suppose every author completes his task feeling that his publication will end the trail once and for all, that he has finally written the definitive work,  the one that answers all the questions and tidies up all the loose ends.  Certainly I think that’s what Morrissey tried to do, because in addition to the main body of the work he has included several Appendices in which he surveys  the modern Kelly mythmakers one at a time, he  provides a detailed line by line commentary on the Jerilderie letter, and answers a few other issues that he feels need specific commentary on. So has he done it?
Well firstly he states in the Preface that the broader context of Kellys life is covered in his other works, his PhD thesis among them, so this book is not actually a complete biography – it ignores Ned Kellys early life and origins, and most of what happened after he was captured at Glenrowan. For example Neds association with Harry Power gets half a sentence, the only mention made of his father “Red” Kelly is to record that he died in 1866 and the only mention of his rescue of Dick Shelton is in relation to his clothing at Glenrowan, where Kelly was wearing the sash he received as a reward.   Morrissey describes what happened to Ned Kelly after he was captured at Glenrowan in a single sentence : “So Kelly was nursed back to health, tried and hanged.”
Instead Morrissey concentrates on the details of Ned Kelly’s adult life as a stock thief and fugitive and shows that the problem with the modern “legend” is that it is based largely on an acceptance of Ned Kelly’s own words in the Jerilderie letter. Closer examination and comparison with numerous other historical records and accounts proves that time and again Kellys version of events cannot be relied on to be a true and accurate record. It is a detailed and comprehensive scrutiny, very similar in style and conclusion to the 2012 publication “The Kelly Gang Unmasked” by Ian MacFarlane, which was of course the landmark publication that signaled the beginning of the end of Kelly idolatry. I am not sure that this new book adds much more than drive a few more nails into the lid which MacFarlane had already quite firmly nailed on to the Kelly coffin. The tone of this book is uncompromising and hard-nosed, very different from the dispassionate academic style of the earlier works.

A typical example is the “McCormick Affair” an incident that resulted in Ned Kellys first term of imprisonment. Ned is routinely portrayed in the pro-Kelly narratives, and he claimed himself  in the Jerilderie Letter to be a bemused innocent bystander who ends up being unfairly persecuted by the Police. Instead, according to Morrisseys research it was Ned himself who wrote the offensive letter, and Ned’s uncle John Lloyd testified later in court that he “saw Kelly try to ride over McCormick”. Ned  had blamed Mrs McCormack for hitting his horse and making it lunge forward, one of innumerable examples of Ned seeking to absolve himself of responsibility for what happened and blame someone else, excuses which the pro-kelly people duly trot out at every retelling. But in reality this was not unfair police prosecution but an example of what we might now describe as “bogan” behaviour being called out.
Another example taken from the inaccurate pro-kelly narrative is Neds insistence that the police who went to Stringybark creek were so heavily armed they could only have been intending to murder him and therefore he was justified in shooting them in self defense. In fact the only arms they had in addition to their Police revolvers were two rifles – one a “fowling piece” and the other a borrowed weapon added to their kit at the last minute. As is well known, they took and used the fowling piece to kill birds to eat while on the search.
Morrissey shows later how Ned Kellys much vaunted destruction of documents taken from the safe during the raid in Euroa harmed selectors rather than Squatters, the opposite of what is usually claimed.
Morrisseys untangling of the complex relationship between Kelly and Fitzpatrick is quite startling. Fitzpatrick is demonized and  pilloried throughout the pro-Kelly literature but Morrissey uncovers a much more interesting story of closeness and intimacy between Fitzpatrick and the Kellys, friendships it seems that both were hoping to exploit to their own advantage, but which in the end went horribly wrong.

So this new book is certainly a “must read” for anyone interested in the Kelly story. It provides some new insights and perspectives but never-the-less there are a few things that disappoint me about it. The biggest disappointment with this book is its more or less complete lack of proper references. Why Morrissey decided to dispense with them is beyond me, because by leaving them out readers are denied the opportunity to verify  his claims for themselves, and to a degree as a result his book is reduced to the level of just another version of the Kelly story: its Morrisseys word against Neds. Essentially Morrissey is saying “Trust me on this” and personally, having read and reviewed his article on Stock Theft I have every confidence in his integrity as a writer. However references make the difference between a work being a great read and an authoritative text, and I think to properly challenge Ian Jones book he needed to supply them.

Another disappointment I have with this book is that it doesn’t address the great question of “Why?”  He writes
“For reasons that cant be pursued here Australians have made  him their national hero”
Maybe at some other time Morrissey will pursue those reasons but I would be intrigued to read his understanding of how Ned Kelly became a national hero. This really is the great mystery of the saga,
but its not just modern day Australians who made Ned Kelly their national hero – he was a hero even when still alive, a phenomenon which demands explanation. Why, as someone posted in a comment on this Blog last year, did NOBODY attempt to dob him in and get their hands on the absolutely massive rewards offered for his capture? Why did the people who knew him protect and support him? If Ned Kelly was just a liar, and a violent and nasty thief then why is he still remembered?
John McQuilton was of course a Kelly author who attempted to answer that greater conundrum about Ned Kelly, the “why” of the Kelly Legend and as I suggested in a previous Post, produced an intriguing and plausible answer.  However, in his chapter entitled The Makers of the Modern Kelly Myth, Morrissey dismisses McQuiltons work as “the shonky foundations upon which successive Kelly writers have built their edifices ever since” He is equally dismissive of Ian Jones work, and is particularly unimpressed with Peter Fitzsimons effort, describing it as “not truthful” and “a novel with distorted historical fact and copious footnotes added to give verisimilitude”
These are harsh judgements and I don’t agree entirely with his assessment of McQuilton, or of Jones,  but  I do agree that the Fitzsimons effort was a cynical commercial exercise that added nothing to the debate despite promising that it would! My own view is that Morrisseys characterisation of Ned Kelly, the man, is accurate.  Those other authors,  in trying to somehow reconcile the man with the  mythology, have made the mistake of getting the two confused, and to a greater or lesser extent have ended up merging them, and then finding themselves obliged to dream up unsustainable theories about Republic, about Land wars and political symbolism to try to hold them together. Morrissey  instead has avoided that mistake and has managed to  isolate the man from the myth with cold clinical precision. His assessment fits with the recent characterisation of Kelly as a psychopath, and he has produced a devastating exposition of his lawless life.

Its been  predicted that the main stream media won’t be interested in this book because its not Kelly Myth. However they did take an interest in Ian MacFarlane and his book, and in Craig McCormicks book Ned Kelly Under the Microscope  so maybe the tide is starting to turn in favour of historical truth. I hope so.
4 Stars.
(Visited 45 times)
Comments (31)