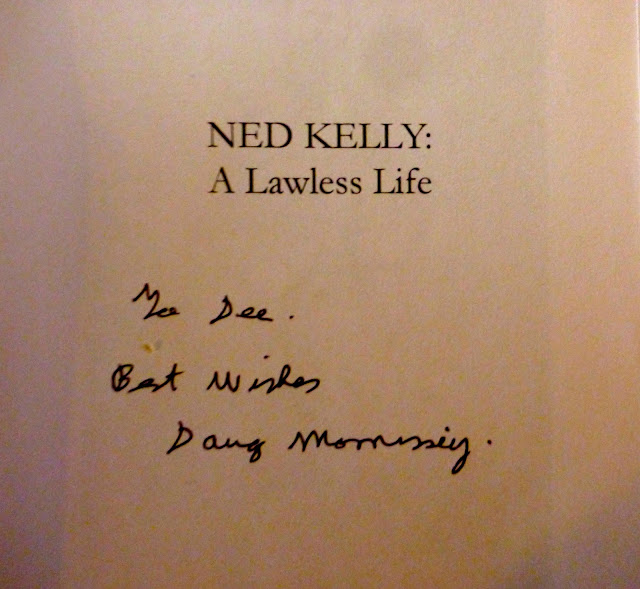 On Saturday June 6th I went back to Bendigo to attend a Presentation on Ned Kelly by Doug Morrissey and Leo Kennedy, and afterwards to the formal launching of Morrisseys book, “Ned Kelly: A Lawless Life”. These two events were linked to a course offered by Latrobe University called “Exhibiting Culture: Imagining Ned”, designed to make use of the Bendigo Art Galleries Exhibition, “Imagining Ned”, which runs till the end of this month. I visited the Exhibition itself a few weeks ago.
Morrisseys talk was based on his book, but to further illuminate the development of the Mythology that sprang up around Ned he played examples of the folksongs that were being sung at the time. They were catchy tunes with romantic emotive and colourful  lyrics about the plight of the Kellys and the gang. Some of the words  and imagery in the ballad “Morton Bay” were plagiarized by Ned and included in the Jerilderie Letter. We also heard “Lonigans Widow” a rare example of a song about Ned Kelly that paints him in a poor light. It was written for the 1970 movie “Ned Kelly” starring Mick Jagger, and sung on the soundtrack album by Waylon Jennings:Have a listen:
Leo Kennedy followed Doug Morrissey with a passionate and moving exposition of the impact of the Kelly outbreak on the Kennedy family. Leos’ great grandfather was Sergeant Michael Kennedy, a respected and decent Irish Catholic, father of four and husband of Bridget. From the agonizing wait to find out if her husband was still alive, to having to put up with the Public utterances of Kelly sympathisers, and Ned Kellys boasting and parading of the gold watch he stole from Kennedys dead body, attacks on the motivations and professionalism of the Sergeant, right down to the recent discovery at Mansfield that Kennedys grave had been co-opted into a Tourist Trail celebrating the life and times of his killer,Ned Kelly, and to the Kelly musical that premiered only a few weeks ago, the Kennedys have borne mostly silently enormous personal grief and anguish. Undoubtedly so too have the families of all the other victims of Ned Kellys violence and hatred.  Leo regards Morrisseys book as part of the long overdue fightback against Kelly mythology, and having heard him speak so powerfully from a personal perspective, I am pleased to have been making my contribution in a small way to that quest to restore  truth and balance to the historical record regarding the Kelly Outbreak. Leos truth was something I hadn’t thought about much before, so for that alone I was glad I had made the return trip to Bendigo.
That a  fightback is clearly needed is demonstrated right now on the Facebook page of the largest Kelly place  on the Internet, Iron Outlaw. The sites owner  has finally acknowledged the existence of Morrisseys book, three months after its release providing a link to an ABC book review, but in his typically arrogant way he disrespectfully describes the author as
“some fellow called Dr Doug Morrissey ( a mate of Alex McDermott )”.

The only other comment made by the clever IO owner – the person who identified me as Bills daughter, no less – is this typically ignorant claim : “strangely no mention of police shooting children to death at Glenrowan. I wonder why..”
I call this ignorant because a single child, John Jones – not CHILDREN – died at Glenrowan, and this incident IS described in the book. What we need to wonder why is how the IO writer could be so stupid as to write about the content of a book he has so obviously not read, and to believe that CHILDREN died at Glenrowan. Poor John Jones died there because Ned Kelly took him hostage and used him as a human shield.  Ned Kelly thought he could hide behind innocent citizens, including children and babies, put on armor and shoot at the Police and they wouldn’t respond!

Following the IO writers rotten example, the ignorance and the disrespect that Kelly sympathisers wallow in is on revolting display in the comments  that follow the book review link. The buffoon whose whining had my two forums deleted leads the way with a description of Leo as a muppet,  of Ian MacFarlane as Numb-nuts and Morrissey ( spelled as More hissey) as “pinup boy for those who are compulsive porky pie tellers.”
He finishes up with this :  “Remember the Victorian Police Motto; ‘It’s better to convict an innocent man than no man at all’, continuing the disgusting anti-Police ranting that Kelly fanatics are so fond of doing.

The ignorant self described ‘Neducator’ repeats the discredited “body straps” nonsense and then writes : “The police also were armed to the teeth, with revolvers, repeating rifles and shotguns and massive amount of ammo” repeating and exaggerating a well known lie – the Police had their usual ONE revolver each, and ONE additional shotgun, and ONE repeating rifle – and this is from a man who offers his services to schoolchildren claiming to tell them “what really occurred”  He clearly has no idea and also hasn’t read the book he criticizes! As I said once before Neducation is their made-up word for made-up history. He doesn’t have the courage to defend these beliefs of his here amongst adults, having vowed never to Post here and face the music! Someone else says most of the cops were convicts and that Ned was just defending his family! Another says hes getting tired of the Kennedy familes complaining!

Sadly, there isn’t a single comment from someone able or willing to challenge these dreadful Comments, and I have been banned from the Page so am doing it here.  I am  going to continue to expose these ignorant beliefs and stupid comments, because I agree with Leo Kennedy : its time to fight back against the odious Kelly myth and the bigots and anti-Police ignoramuses who promote it.

Cant wait for the next two books of Morrisseys trilogy to further expose the Kelly mythology to the light of reason and intelligent analysis.
(Visited 38 times)
Comments (11)