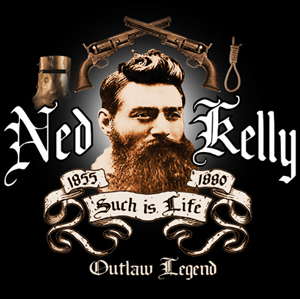 A few weeks ago, a Kelly sympathiser wrote a Comment that began like this : “I know you won’t publish this because you are nothing but a gutless turd , but I will write it anyway...”
and then the anonymous Sympathisers rant proceeded to accuse me of being sick twisted and biased, and of having an “anti Ned agenda” before finally concluding: “In short…you are nothing but an ignorant hypocritical lying  c**t”

This person was right about one thing : I wasn’t going to Publish obscene personal attacks. There have been many of a similar kind over the past year or so, so they don’t trouble me in the least, because  all that Comments of this kind achieve is to reveal the ugly and petty shallowness of Kelly sympathisers, and confirm the rightness of my decision to Moderate Blog Comments. The thing is, calling me sick and twisted and biased, a gutless turd and a liar achieves nothing, but if that person instead wrote WHY they regard me as ignorant  and hypocritical and possessed of an “anti-Ned  agenda”, refrained from vulgar abuse but instead made a case, then we might all learn something and I WOULD publish it whether or not I agreed with it.  I am not afraid of criticism or correction or the expression of alternative opinion – in fact I welcome it.

I have had another thought about the Moderation process : it actually makes it possible for any reader to communicate with me directly, like Anonymous did rather than through the Public pages of the Blog. All someone needs to do is state that their comment is not for Publication, and then they can say to me whatever they want. So feel free to do so.

In fact what I have decided to do is to invite anyone who wants to write something more than just a comment, to submit it to me as a Guest Post. If Anonymous wants to write an Essay explaining WHY I am ignorant and where I have gone wrong, or  someone else wants to explain exactly why they believe Ned Kelly is a hero and icon, or why Ned should be remembered as a Revolutionary leader then send it to me for publication as a Post not as a Comment,  and I will turn it into a Blog Post. Then everyone else can comment on whatever it might be that the Guest has decided to write about. The Post can be anonymous if the Guest wishes, and I promise not to alter it in any way, though if it is vulgar or abusive it won’t be Published. Communication would be helped by including a return email address but thats not necessary either.

So Readers this is your chance to really get it off your chest. Ive posted 102 times, which is more than enough – though I still have more to do – but I would like to open up the Blog to other contributors and points of view, and I’m particularly interested in hearing from the people who regard Ned Kelly as an Icon and Hero.  Among the 150 plus people who read this blog every day there  must be quite a few with issues or complaints or ideas they would like to put out there – Bill, Mark, Sharon and the two Brians, Bob and everyone else on the NKF and elsewhere consider this a formal request! Send in your Reports, Declarations, Accusations, Investigations, Theories, Arguments, Guest Posts, whatever you’ve got…this is your chance to defend the Kelly Legend.  But if you don’t, what is there to stop me declaring Game Over?

So, is there ANYONE out there willing to make a defence for Ned Kelly? To say why he SHOULD be an Icon, why he WAS a Hero, why he is NOT a Villain? Anyone ??

4 Replies to “Your Turn”