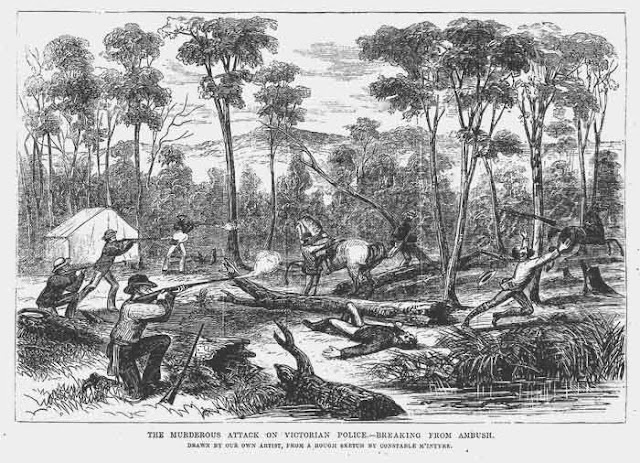 Exactly one year ago today I was described on Facebook by a well known self-promoting ‘relative of the Kelly gang’ as a “gutless faceless troll up to its old tricks again, bottom feeding like the scum it is”. This hysterical outburst came about because I was responding to a claim published the same day on the Unmasking the Kelly Gang Unmasked  Facebook page  that its Moderator had solved the mystery of how Lonigan was supposed to have been shot once but had four bullet wounds in his dead body at the autopsy.  This was a topic that was being discussed at the time on this blog.  The  Facebook claim was that Lonigan was killed as he ran for cover, and it was illustrated by the accompanying diagram: 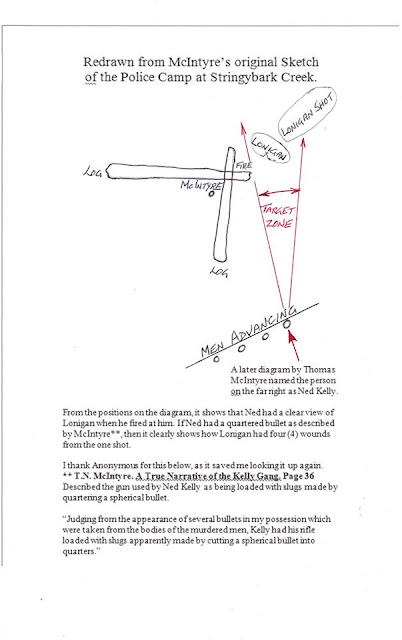 It was immediately obvious to anyone with half a brain that this explanation was complete rubbish, and I pointed it out.  The diagram had Lonigan running to the right, which would mean the right side of his body would be facing Ned and the Gang – but he was hit on the left arm and the left thigh. The bullet in the left thigh had entered from the outer aspect  and travelled inwards, the exact opposite of what would be found if Kelly had somehow managed to hit the left leg from his position on the right of Lonigan. This explanation also contradicted Neds description of what happened, which was that Lonigan was behind a log and lifting his head up above it and aiming at him when Ned killed him.
For this explanation to work, known laws of physics would have to be suspended to enable bullets to be discharged in one direction but arrive at their target from the opposite one, and Ned Kellys testimony would have to be accepted as lies. I don’t have a problem with the idea that Ned Kelly told lies – we know he was an habitual liar – but I do have a major issue with an explanation that requires the Laws of Physics to be suspended.
Once the FB moderator had read my demolition of his nonsense, he had the intelligence to at least realize he had made a  major stuff up, but sadly not the grace to admit it publically. Instead he returned to the original FB Post and doctored it to now read at the beginning “ Part 1 : McIntyres version” , making out that part 2 would be the solution he had just devised. This was a rather contemptible bit of sleight-of-hand but I was looking forward to seeing how he was going to wriggle out of the mess he had just made for himself, given he had already announced he had solved the puzzle :
‘To enlighten them all …..I will explain with the help of two attachments how Ned was able to shoot Lonigan and how Lonigan was able to receive the wound to the thigh. I am surprised no one has worked this out before.’
I looked forward to reading it, but seriously doubted he would ever provide “Part 2” and Ive been proved right. I started to count the days, and record on the Blog how long we had been waiting…and today, we have been waiting an entire year! 365 days of failure to deliver means he will never deliver. He’s clueless so I will put the guy out of his misery and stop counting.
Interestingly, during this same year his FB page has declined to the point where it seems to have been abandoned – only one “post’ this year. He banned me from it, copying what the NK Forum and Ironoutlaw have done, conveniently making my  comments there disappear! But as I have noted before, interest in Kelly is declining everywhere in the Kelly world – the ‘postponement’ of the Ned Kelly Weekend for 2016 is a recent example. The Ned Kelly Forum and Iron Outlaw web sites are moribund, their facebook pages struggling to find anything to discuss apart from old photos and news items, the Ned Kelly Centre is dead and I think even the Ned Kelly Central FB page may be starting to lose its appeal, as the age of the Jones-Kelly myth continues to recede into the past, helped on its way by this Blog I have no doubt.
So, having waited all this time and only observed the ongoing decline of interest in kelly mythology, the mystery of what happened to Lonigan has remained unsolved.
I wrote ages ago that one thing we know about the terrible events of SBC, is that Ned Kellys version of events cant be trusted – in the context of the known facts about Lonigans wounds, being behind  a log AND being shot only once is an impossible combination of events – there is simply no way Ned Kellys claim that Lonigan was hiding behind a log, AND was shot only once can be reconciled – its simply impossible. Either other shots were fired before or after he got behind the log, or else, if there was only one shot, it was fired while he was out in the open.   This explains why after an entire 12 months the Kelly sympathiser couldn’t come up with an explanation of what happened at SBC because the first thing anyone trying to do so has to confront is that Ned Kelly lied about it – and no sympathiser is willing to confront that awful truth abut their hero.

The suggestion someone made on this Blog that Lonigan was somehow ‘wrapped’ around the end of the log  with his left thigh exposed is implausible, but also contradicts Neds account, that Lonigan was BEHIND the Log.

However, as soon as Kellys account is recognised as lies, and dismissed,  the pieces of the puzzle start to come together and the solution can be found.

Read on and learn the truth as I explain how I discovered it.

One big difficulty that I had was the consistency with which McIntyre claimed only ONE shot was fired, and yet there were four wounds. I had previously suggested his memory of such a stressful event may have been faulty, and he only remembered the shot that felled Lonigan but not others. One of the hostages at Faithfulls Creek, Stephens,  claimed Ned  had told him he had fired twice. Its been suggested shots may have been fired into Lonigans dead body later, after McIntyre had gone. Someone suggested these other wounds were caused by ‘crossfire’, meaning shots fired by Kennedy at the gang which missed them and hit Lonigans corpse lying on the ground – three times! And then there is the ‘quartered bullet’ theory, which is that a single shot caused four wounds because the bullet was quartered.
I have been inclined not to accept the ‘quartered bullet’ theory, because  I’ve thought that the parts of Lonigans body that were hit  cant be made to all face the gun at the same time. Particularly, I struggled with the description of the bullet that went through Lonigans eye, because it was said to have entered at an angle, which I took to mean from the right side, but the discussion that took place on this topic at the time taught me this could have been from above or below or even only slightly from the right. The other difficulty I had was that the quarter that entered the brain, smashed its way through the bony eye socket , and another passed right through Lonigans arm but the quarter that entered the left thigh did so with almost no force at all, barely penetrating the skin.  The quarters – if truly quarters – should have impacted Lonigans body with equal force. Its been suggested the bullet found in Lonigans thigh had lost is momentum because it was the same bullet that had  first passed through his left arm. John Phillips and others suggested something even more implausible to account for this wound – he suggested that Lonigan accidentally shot himself trying in a desperate  panic to unholster his own revolver. This would suggest Lonigan was left handed and that the gun badly misfired. Both unlikely.
Having thought  about all these dilemmas for a year, I believe there is an explanation which brings it all together. I have changed my position about McIntyres memory – I believe it was accurate and only one shot was fired.  This means Lonigan was out in the open when Kelly shot him. I have changed my position on the quartered bullet theory and now regard it as likely.  I think the bullet that went through Lonigans left arm ended up in his left thigh – this would fit with the possibility that Lonigan was reaching for his revolver, his arm down near the thigh, the bullets momentum being greatly reduced by passing through the fleshy part of his forearm – as described by Reynolds. Another quarter went into his brain, one grazed the right side of his head and the fourth missed altogether. I don’t believe what Ned told Stephens at Faithfulls creek –  about shooting twice – was anything but more of Kellys lies, just as his story about Lonigan hiding behind a log and raising his head above it to shoot at him were. I think Reynolds description of the bullet he removed from Lonigans thigh as a ‘revolver’ bullet was mistaken – it was a quarter of a bigger rifle bullet. The rest of my explanation is best summarised by another one of my exquisite diagrams :
at you see here is Lonigan standing as McIntyre said, behind him to his left and logically, his body turned towards where McIntyre was standing by the fire. His left side is exposed to the Kelly gang and Ned’s gun, but then on hearing the shouted “Bail up” turns his head sharply to the left and exposes his right eye….. he has seconds to live.
When I first drew this and looked at it, I felt a kind of chill. This simple diagram explained and confirmed everything that McIntyre said and exposed Neds lies. As McIntrye said, Lonigan was shot almost immediately, right where he stood, out in the open. If he had turned to run the wounds would be on the other leg. If he had been behind a log, no leg would have been wounded. If he did make a move toward his gun, he wasn’t given a chance to get it out. It was never a fair fight as the myth makers like to pretend. He was shot pretty much in cold blood right where he was when the Gang broke cover. Exactly as McIntyre said.
If someone knows what weight bullet Neds rifle would usually fire, and if quartered if it would be of similar size to a revolver bullet I would like to know. Can anyone find out if Lonigan was left handed? These extra bits of information would help to confirm this theory, but I think my explanation accounts for all the known facts, and should now be regarded as the definitive explanation of Lonigans death.  If you have a better one let us know, but I won’t be waiting a year for it. The only thing thats prevented everyone from seeing this till now is that as usual, everyone has been hypnotised by Australias greatest conman, Ned Kelly. His lies about this event, like his lies about so many other events have once again created confusion and uncertainty about the truth of what really happened – kick all of them out of the way and the truth becomes obvious.

More of Kellys lies exposed and another Kelly myth bites the dust.

66 Replies to “A year later, the Explanation about Lonigans death that we’ve all been waiting for…” 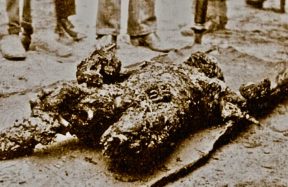 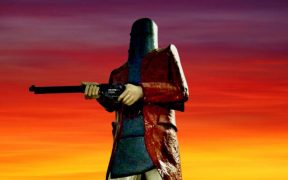 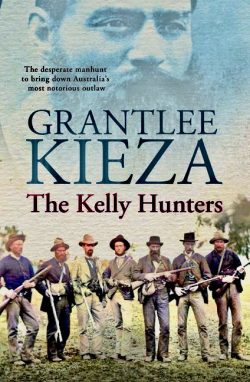