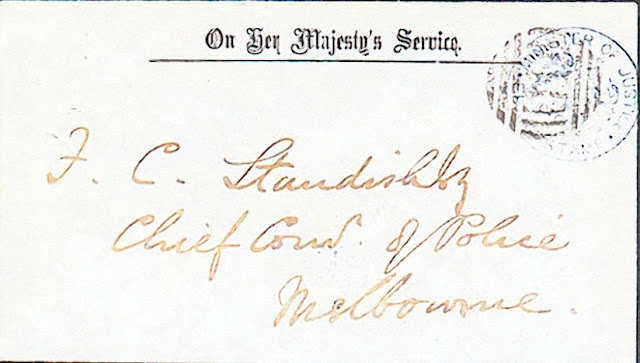 One thing about the Kelly era  that is still the same today is that the Press like to write sensationalist stories in order to sell newspapers. Thus, when the Kelly Gang had murdered three Policemen at SBC the Press became increasingly critical of Police performance and expressed and encouraged a rising sense of outrage in the community when the Gang was not immediately apprehended. With the robberies at Euroa and then Jerilderie the outrage increased even further, so that by the time the Gang had been destroyed and Kelly captured,  but with further loss of life at Glenrowan, the call for a Royal Commission of enquiry into the Police became too loud for the Government of the day to resist any longer, and a Royal Commission was established within a few months of Ned Kellys execution. (Click HERE to read all of the Reports of the Commission at Bills site : Thanks Bill!)
They say these days, somewhat cynically that  Politicians don’t launch Royal Commissions unless they know what the outcome is going to be, and for the Politician the outcome they seek is always some sort of advancement of their own political agenda, whether it be to undermine their Political opponents position, or  strengthen their own. The truth about the motivation behind the establishment of an RC might be better understood by looking at who the Government appoints as Members of the Commission or by its outcomes and at which of its recommendations the Government acts on.  Obvious contemporary examples of the politically motivated RC are the Governments RC into the Union movement, and the absence of the one into the Banking system proposed by the Opposition. There are also examples of RC’s that are less obviously inspired by purely political motive, but the politics becomes apparent afterwards, when the  Government of the day has to respond to the recommendations of the Commission.
So when it comes to the Royal Commission into the Kelly Outbreak we shouldn’t be so naïve as to imagine it wasn’t launched without a Political endpoint in mind, or that its enquiry was wholly objective and free of personal and political agendas.
Justin Corfield says in his Encyclopedia that Graham Berry, the Premier who established the RC was anxious to have the ‘Kelly business’ over by the time of the next state election. Thus at the very least, this RC was a clever way for the Government to delay having to respond to a difficult issue until a much later time, when they hoped the publics disquiet had settled and its attention had moved on to something else.

21 Replies to “The truth about the Royal Commission”