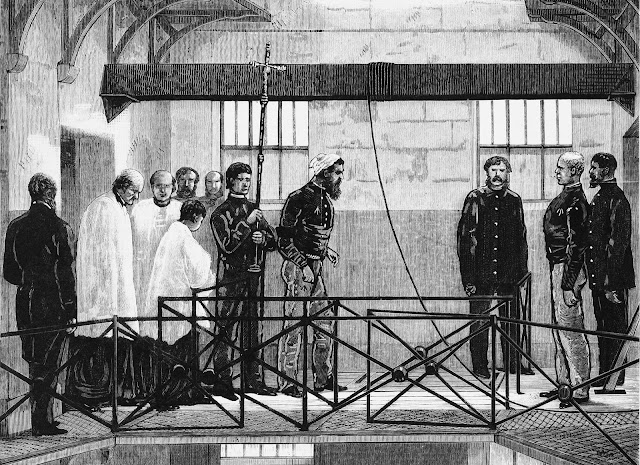 Stuart Dawson has done it again! He’s the academic from Monash University who last year uncovered the distortions, the inaccuracies and the outright lies that the Ned Kelly story-tellers include in their accounts of Constable Fitzpatricks role in the outbreak. He debunked the Fitzpatrick mythology, and now hes debunked another bit of Mythology in the Kelly story: this time (HERE) it’s the claim that Ned Kellys last words were “Such is Life”
This is not as shattering a revelation as his Fitzpatrick research was, because claims that “Such is life” were not Ned Kellys last words have been made before. It was made in 2005 in Alex Castles book, ‘Ned Kellys last Days’ and more recently, joint authors Queensland Psychiatrist Russell Scott and Ian MacFarlane, author of The Kelly Gang Unmasked  made this claim, along with their thesis that Ned Kelly was a psychopath in a paper published in 2014.
The Courier Mail ran their review of that paper under the heading ‘Ned Kelly’s last words were not ‘such is life’, Queensland psychiatrist and Melbourne historian claim’ and attracted a long string of outraged comments from people who usually betray their ignorance of Kelly history in their responses, fail to address the actual argument and typically resort to ad hominem attacks on the authors.
Dawson points out that on the day following Ned Kellys execution, journalists from The  Daily Telegraph, The Argus and The Herald published eye-witness accounts of what happened. The Telegraph reports that Neds last expression ‘was never concluded’ and all he managed to say was “Ah well I suppose…” before he stepped onto the drop. Nobody seriously believes that the Journalists observing  from the floor below would have been able themselves to hear exactly what Ned might have said, and so were relying on what they were told by the officials  who were right there with him at the Scaffold. They told the Journos that Ned had complained about having his arms pinioned behind his back, and that “Ah well I suppose..” was all he said. The Telegraph writer also published the gaol officials speculation that Ned ‘was probably meaning to say he supposed this was the last of it, or this is what it had come to’.
The Argus report seems to be an expansion of the Telegraphs report, converting the speculation about what Ned may have intended to say, into something he actually did say, so it becomes : “Ah well I suppose it has come to this”.
In contrast to these two accounts, which seem to agree that Neds last words were, at a minimum “Ah well I suppose…” the Heralds account  says something altogether different, and is revealed as the source of the famous phrase attributed to Ned Kelly :  “as he stepped on the drop, he remarked, in a low tone, ‘Such is life’”
Dawson argues that these words were merely another attempt to recreate the intended meaning of Neds unfinished statement “Ah well I suppose…” but being short and pithy, ‘such is life’ became the expression that was most widely adopted, and eventually became part of the accepted “Legend” . Later writers had Ned saying “ Ah well I suppose it has come to this” AND “Such is life” but on November 11th and 12th 1880, nobody was reporting that he said BOTH.
An important historical fact that I found especially interesting was that the expression “Such is life” was in common use at the time:  “The day after the execution, the Ballarat Star wrote that Kelly’s “last exclamation, ‘Such is life’-a colloquialism that is used frequently in connection with the most trivial worldly affairs – appears to have been dictated, if it were not indeed his last effort at bravado,  by a cool indifference for his fate in this world or the next”
The article also notes that  Charles Dickens used the expression ‘such is life’ in his wonderful novel from 1861, “Great Expectations”
Therefore attributing the origin of  ‘Such is Life’ to Ned Kelly would be like saying Eddie Maguire invented the phrase ‘a big ask’, Kevin Rudd invented ‘ fair shake of the sauce bottle’, or Barack Obama invented “Yes we can”.
All we can confidently say about Ned on the Gallows is that he didn’t make a speech, he mumbled a few words which at best were “Ah well I suppose it has  come to this’ but were probably just “Ah well I suppose….”
“Such is life” is an invention that has stuck and become a prominent part of the Kelly myth that says Ned went bravely and defiantly to the Gallows, but it seems he shuffled onto the trapdoor mumbling, and words, for once escaped him.
(Visited 76 times)
Comments (22)