On the Kelly Facebook Pages they’re arguing about who owns the Kelly story and who has the right to tell it and where it should be told from. Theres a Glenrowan Camp led by Joanne Griffiths, who is an actual Kelly descendant apparently, and the Beechworth Camp centred around the Kelly Vault, an annexe to the Burke Museum that houses the private collection of a Kelly enthusiast, Matt Shore, along with the public collection of Kelly related objects from the museum.

The latest skirmish has been provoked by a letter to a local newspaper backing Joannes proposal. The Vault and the Ned Kelly Center both almost simultaneously posted an image of the letter, then proceeded to dismiss the points its author was trying to make.

Frankly, the arguments between these two groups are unedifying and childish, and unlikely to enhance Public support for either side. I think the Vault is making a serious mistake in taking sides and aligning itself with Leigh Olvers group, though the Vault is probably in debt to it now because of the preposterous deal they made about exhibiting the Unforgotten Image. More than one person suggested if  the Vault hadn’t made those compromises then ‘the Public’ would  never have had the chance to see the photo. Well, yes but so what? Matt Shore said the Photo added nothing to the Kelly story, but the Vault seriously compromised its professional status in agreeing to  the peculiar demands of the Kelly faction that owned the Photo. Was it worth it Matt, to compromise your Museums reputation for something that added nothing to the Kelly story? Is the Vault going to reduce itself to the status of travelling Freak Show, now simultaneously exhibiting ‘the greatest Kelly discovery in 50 years’ and ‘ the Kelly find of the Century’?

Instead I think the Vault ought to have stayed neutral and strongly urged these two factions to settle their differences behind closed doors. What I would suggest they do is create some sort of Kelly descendants Organisation, register members and get them to vote for half a dozen members to form a committee to represent them all, for the committee to then elect a spokesperson and for everyone to support one leader and one policy in the Public space. At the moment the egos of Joanne Griffiths and Leigh Olver are not just getting in the way of progress, but actually ruining the prospects of ANYTHING being achieved by Kelly descendants.


So why have I called this post “Dee owns the Kelly story”?

Its because yesterday I received my copy of “Edward ‘Ned’ Kelly : The Definitive Record”  by Kelvyn Gill. Its over 1200 pages long, in two huge volumes. What the author has assembled is an exhaustive collection of every document and publication he could find that was issued at the time by newspapers, government and other sources that related to the Kelly outbreak. They are presented in chronological order  beginning from well before Ned was born, to well after. He makes a point of NOT including ‘oral history and anecdotal material’ – a wise move because todays oral history and anecdote are an almost bottomless pit of untestable tales, many of which would have only the barest trace of something historical at the bottom of them. On the other hand official records, telegrams, newspaper reports, and personal recollections made at the time have a far greater authority as source material. But there also numerous photos, old diagrams and lists, the text of the Cameron and Jerilderie Letters,  and The Royal Commission. And much much more. Kelvyn Gill has produced a marvellous academic resource and deserves huge congratulations and respect for what must amount to being almost a lifetimes work. 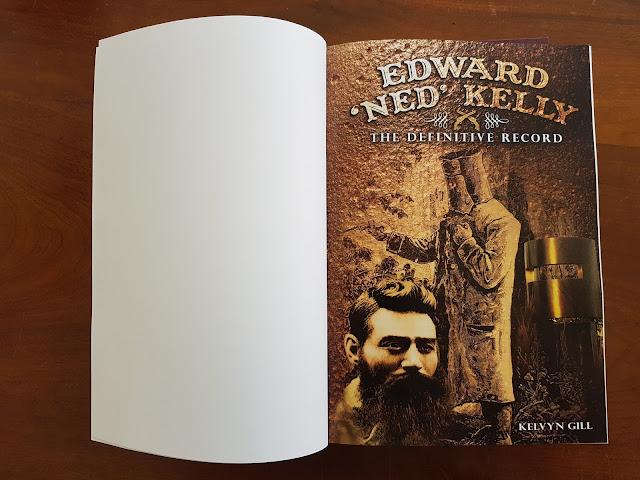 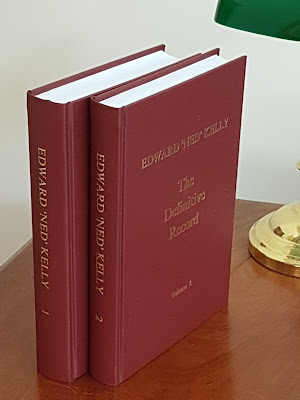 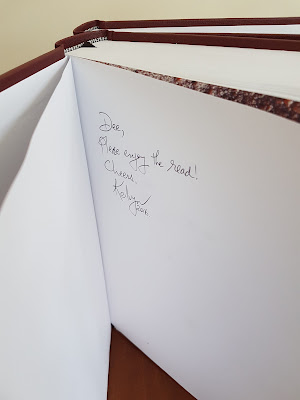 This is an invaluable collection that anyone SERIOUSLY interested in the Kelly story should own. Its a resource that will prove invaluable for any research you might want to do, but its also a fascinating place to randomly open and begin reading – there is something to learn and be surprised by on every page.

According to the original email I received about this work from Kelvyn Gill, only a limited number of these volumes is being printed. At present they can be ordered from him directly at a cost of $160 including Postage, but this is going to increase substantially once the book has wider retail release – he suggest it will be at least $200. For anyone wondering about the cost, try going to  a University Bookshop and buying a standard text book on any subject : many are double the price of this work which has taken Mr Gill 30 years to produce. Believe me, its well worth the purchase price : his email is gill26p@tpg.com.au

I wish everyone all the Best for 2017. The Kelly story is not going away and neither am I.