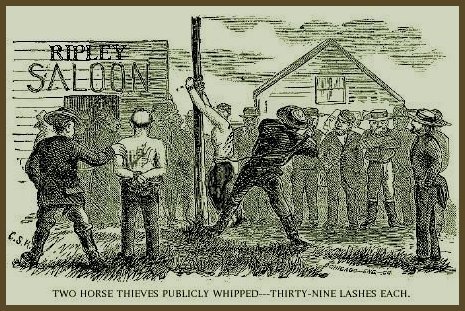 If the defenders of Ned Kelly ever point to what they think is actual evidence of Police corruption and the unfair persecution of Ned, the incident they are most likely to refer to is the one where they say, for being caught riding a horse someone else had stolen, Ned got double the sentence that the thief himself got – eighteen months for Isaiah Wright, three years for Ned. Up to that point everything on record supports the view that the Kellys received a fair go from Police and Judiciary. However, on the face of it that sentence certainly does look unfair, but if it is, it’s the first ever example of something which looks like Kelly persecution.
For Kelly supporters there are two problems with this story: the first is that if it does turn out on close inspection to be some sort of corrupt action by Police and the Judiciary, it cant be used as an explanation of why Kelly became a criminal because he already was one. If this is the first example of police corruption its way too late in the story to be cited as a cause for Kellys rebellion: hes already been in Court over three charges relating to highway robbery, one of indecency, two relating to assault of local hawkers, and hes already done time in gaol. The notion that Kelly turned to crime because of Police persecution doesn’t fit the historical sequence of events.
The second problem is that when you carefully analyze what happened, as Morrissey did in his recent book, you discover there’s a whole lot more to this episode, a back-story that demolishes the idea that the court treated Ned unfairly. It provides an explanation that makes sense of the whole episode, and provides answers to two issues that the myth about this incident fails to answer: why the Judiciary, having previously dealt fairly with the Kellys would suddenly decide to be manifestly unfair ( it didn’t) , and why Wild Wright wasn’t prepared to come to Neds aid in Court (Ned betrayed him).
So what did happen?
The Kelly myth is that as he rode through Greta one day,  Kelly was arrested, after a violent struggle by senior Constable Hall and then was charged with having stolen the horse. Ned Kelly said the horse wasn’t stolen but belonged to Wild Wright but in fact, the horse belonged to the Mansfield postmaster, George Newlands.  In Court, when it was shown Ned couldn’t have stolen it because he was still in Beechworth prison when the horse disappeared, Wild Wright was charged with the theft and Ned Kelly with ‘feloniously receiving a horse’. Both were found guilty, and Ned received three years with hard labour, but Wild Wright only got 18 months. J.J.Kenneally says of Wilds sentence: “The Loaded Dice was not used against him”
Much is made of Neds protestations of innocence but why, if he believed he was innocent did he so strenuously attempt to avoid arrest?  Another fact not usually discussed was  the manner in which Ned came into posession of the horse : Wild had stayed a night at Neds place and though in the morning the horse couldn’t be found, once Wild had gone, telling Ned he could use the horse if he found it, Ned did indeed find it! Theres a similar story from years earlier, of Ned when he was 11 claiming a reward from the Sheltons for finding and returning a horse of theirs that was ‘lost’.  Was the horse really lost or just hidden? Nobody knows.
The most significant part of the saga that the Kelly mythmakers avoid discussing is the role of James Murdoch, a labourer and petty criminal who lived in Greta. He told the Court that Ned approached him at home in the afternoon of April 15th and they discussed a plan to sell the chestnut mare along with some other horses they planned to steal.  Murdoch declined to get involved, worried that Ned and Constable Hall might be trying to entrap him. In the Jerilderie Letter Ned wrote ‘he (meaning Hall) got James Murdoch who was recently hung in Wagga Wagga to give false evidence against  me but I was acquitted on the charge of horse stealing and on Hall and Murdochs evidence  I was found guilty of receiving’  J.J.Kenneally repeats this same claim “It is alleged that one James Murdoch who was afterwards hanged for murder at Wagga Wagga NSW received £20 from Hall to give evidence against Ned Kelly” . Justin Corfield and Peter Fitzsimons both repeat Neds allegation about payment, and also his claim that Murdoch was later executed.

Why then is James Murdochs involvement in this saga completely ignored by Ian Jones? Perhaps he realized that there is no evidence to support the claim that Hall bribed Murdoch, suspecting it to be another of Ned Kellys lies and he probably also knew that Ned was mistaken in claiming Murdoch had been hanged for murder : he wasn’t. As Morrisseys careful research revealed, Murdoch was still around long after Ned had been hanged, and was himself  in gaol for housebreaking  at Benalla in 1884. Ned Kelly confused James Murdoch with his brother Peter, who was indeed hanged  for the murder of one Henry Ford at Wagga Wagga in 1877.
The other telling information highlighted by Morrissey that undermines Neds allegation against James Murdoch is that a few months later, by which time Ned Kelly was in gaol, Murdoch and his wife were part of a close group of friends that supported Ellen Kelly in her claim for maintenance against William Frost. It seems highly unlikely that Ellen would have been close friends with a man whose perjury resulted in her son being sent to prison. Later, after the Court decided in Ellens favour this group celebrated with such exuberance over several days in Benalla that four, including Ellen and Murdoch were charged with ‘furious riding’. They were all acquitted, the Police Magistrate  accepting Ellens lawyers claim that Benalla had yet to be formally gazetted as a Township, and therefore its streets could not legally be termed a ‘Public Place’.
These episodes further undermine the notion that the Kellys were the subjects of a campaign of ill treatment and persecution by the Police and the Law because  firstly Ellen expressed her confidence in the system by taking Frost to Court, secondly, she won the maintenance she sought and lastly and most instructive  of all, she was acquitted of the charges of furious riding on a legal technicality that a corrupt system  could easily have ignored.
So how do these facts about Murdoch’s involvement alter the story of the stolen chestnut mare? Well for one they explain why Isaiah Wright didn’t come to Neds aid in court and accept all the blame for what happened to that horse. He realized that Ned had double crossed him and was planning to sell the animal. It also explains the difference in their sentences, because the crime  Wright was convicted of was not of STEALING the horse as is so often wrongly claimed by Kelly devotees, but of  ‘illegally USING a horse’, which is a much less serious one than stealing it, and much less serious that the one Ned Kelly was convicted of : ‘feloniously receiving a horse’. “Using” a horse was a not too uncommon petty crime, wherein eventually the horse would be returned to the paddock from which it was taken. Wild Wright had apparently “used” this same horse in that way on other occasions. Ned however, intended to sell it, illegally. Morrissey writes (p38) “The crucial distinction to be made here is between borrowing without permission and ‘receiving’ which legally implied theft. It’s the difference in modern terms between joy riding or fun and car stealing for profit”. Writers, such as Jones who want to  inflate the idea that Neds crime was a minor one typically list it as just “receiving”, which makes it sound quite benign rather than “feloniously receiving” which denotes the ‘felonious’ or criminal intent of the ‘receiving’. This is another illustration of the deceitful way in which Kelly myths are manufactured, by only telling half of the facts.
This understanding  of the story also much better accounts for the reason Ned and Wild Wright had that boxing match after Ned got out of gaol three years later : if the sympathiser story was correct Ned could hardly blame Wild Wright for variation i their sentences, so fighting him makes no sense. However the fight was more likely initiated by Wild because he learned in the court that Ned had tried to double cross him, sell the horse and leave Wild as the likely suspect.
In contrast to the involvement of Murdoch which is either dismissed or ignored altogether by Kelly supporters, there is another aspect of this episode which they never fail to mention in their quest to construct their case for Police persecution of the Kellys, and that’s the unnecessarily violent way in which Senior Constable Hall arrested Ned. I wrote in detail about this HERE and suggest you read it again. There are two important points to make about the arrest:  Neds violent resistance to being arrested doesn’t fit with his claim to have been innocent – if he had gone quietly there would have been no violence. Secondly, Halls dreadful behavior doesn’t constitute proof of a campaign of ill treatment against the Kellys. In every Police force there are individual officers whose temperament makes them unsuitable for frontline duty, but systemic corruption and a campaign of persecution are something altogether different and its absurd to argue that the existence of the former is proof of the latter.
So, after close examination of the Kelly supporters ‘best case’ in their argument for Kelly persecution, what all the evidence shows is that it’s a misrepresentation to claim it was in some way a miscarriage of justice.  Ned Kellys lies in the Jeriderie Letter once again mesmerised all the Kelly supporters who were already under the Kelly spell and repeated the ‘poor hard done by Ned’ sob story for decades. Morrissey exploded it, at long last. And by the way the final proof that this case doesn’t provide evidence of the unfair persecution of the Kellys is that Ned was released 6 months early. Such terrible ill treatment!
(Visited 104 times)
Comment (1)