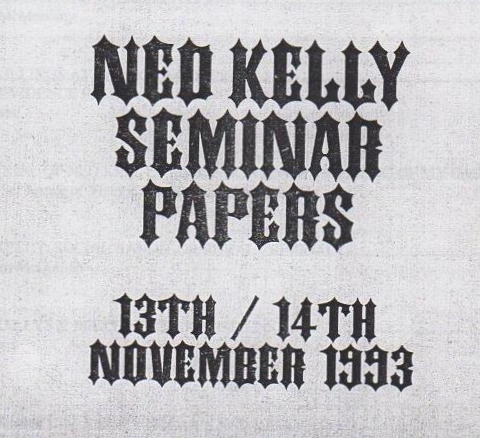 To celebrate the 25thAnniversary of the 1967 Kelly Symposium at Wangaratta, a second Kelly Symposium took place at Beechworth, on November 13th and 14th, 1993, but unfortunately no official publication resulted from this second Kelly symposium. However the Lectures were transcribed by a now vanished Kelly enthusiast, Marian Matta, into a document which seems to have circulated within the Kelly world, but which thanks to Bill Denheld, is now available to read and download for free on his terrific website. ( CLICK HERE – its about 70 pages)
The title of the lectures that have been transcribed from the 1993 Symposium were
1.   CONVERSATIONS WITH SILENT PICTURES
Keith McMenomy
2.   THE KILLINGS AT STRINGYBARK CREEK: NEW EVIDENCE FROM A SURVIVING WITNESS Ian Jones
3.   THE TRIAL OF NED KELLY: MR BINDON KNOWS NOTHING OF MY CASE.
The Chief Justice of Victoria, His Honour John H. Phillips
4.   THE KELLYS & BEECHWORTH REVISITED
Ian Jones
5.   NED KELLY: SOCIAL BANDIT OR RURAL CRIMINAL?
Dr. John McQuilton
6.   MODERN MYTH: SIDNEY NOLAN’S NED KELLY
Jane Clark
As I said in one of my comments about the original Symposium at Wangaratta, it was the catalyst to a great flourishing of interest in the Kelly story, and in the years that followed, after a 10 year gestation period  there was a proliferation of publications of one kind or another about the Kelly saga: John Molonys “I am Ned Kelly” and “Ned Kelly – After a Century of Acrimony” by John Meredith and Bill Scott, were both published in 1980, the anniversary year of Ned Kelly’s execution. 1980 was also the year that the influential and hugely popular, award winning TV Miniseries “The Last Outlaw” went to air. In 1984 there was Keith McMenomy’s amazing “Ned Kelly : the authentic Illustrated history” in  1987 Doug Morrissey wrote his PhD thesis “A Social History of Kelly Country” , John Phillips published  “The Trial of Ned Kelly”, and John McQuilton published “The Kelly Outbreak”. Ian Jones’ “The Friendship that destroyed Ned Kelly” was first published in 1992.
The following year, 1993 when the Symposium was convened, Marian Matta made this extraordinary claim : “The past quarter century has seen Ned and the Kelly Outbreak recognised as a major theme in the study of Australian social history, not just an embarrassing aberration or a case of idiosyncratic criminal behaviour. It would be safe to say that Ned is no longer seen as Colin Caves ‘bearded braggart brawling Irishman; horse thief bank robber bushranger and murderer; the loud mouth lawbreaking swaggering son of an Irish convict’ but as a complex and extraordinary man whose ethical standards and moral courage eclipse his relatively minor criminal tendencies”
“relatively minor criminal tendencies” – Really? And yet that it would seem was how Ned Kelly was increasingly being seen in Australia, a man who had been ‘shabbily treated by the Law of the day’ (Aust Womens weekly 8/10/80) but rebelled and became an Australian Legend!
Two years later, in 1995 Ian Jones finally published the biography that overshadows all other Kelly biographies. “A Short Life” and five years after that one of the enduring images beamed to the  entire globe from the opening ceremony of the Sydney Olympics, was of gun-toting Kelly images in the style of the famous Nolan series of oil paintings. As noted above, these images were discussed in great detail at the 1993 Symposium.
There have been many other publications of varying quality, continuing right to the present day, but theres no doubt , 25 years after the first Symposium, and for much of the next 25 years as well, Kelly enthusiasm was huge in Australia.
However, as we discussed in the review of the original Symposium, that enthusiasm is now dramatically on the wane, because key pillars of the Kelly legend have finally been subject to proper scrutiny and the spell cast by Ian Jones is dissipating. We are returning to discover that the truth about Ned Kelly is that he was in fact that man described by Colin Cave and dismissed by Marian Matta, “horse thief, bank robber, bushranger and murderer”
I am a bit Kellyed out at present, after writing up all the reviews of the original Symposium and enduring the onslaught of Kelly trolls on the Ned Kelly :The True Story Facebook  page. I suggest readers who are interested download the 1993 Symposium documents from Bill Denhelds website and post their observations and thoughts here. I may yet write up posts on at least a couple of those 1993 papers but for now I’ll wait to see if anyone else is interested in doing so.
(Visited 42 times)
Comments (68)