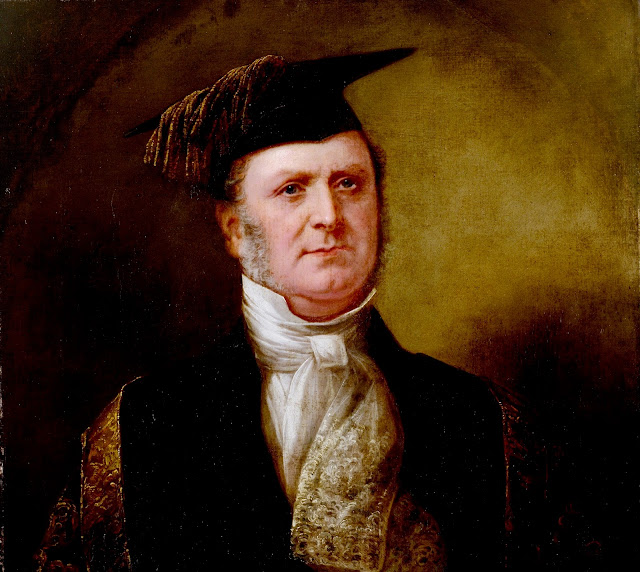 Its not surprising that Sir Redmond Barry is not liked by people who idolise a police murderer – after all he sentenced Ned Kelly to death.  But criminals and their families and supporters almost never applaud or have anything decent or fair to say about the Judges who put them away, and its no different for the Kelly story. On the Iron Outlaw website –  unsurprisingly given that its run by a dedicated blind Kelly fanatic – Barry was listed as a “Villain” and a short so called ‘biography’ is nothing but a hatchet job on the man. Quotes disparaging him are taken out of context and all the many great and enduring achievements of his interesting life are completely ignored. The truth is that Barry was one of the great founding fathers of Melbourne and his memory will endure. Amongst Kelly fanatics though, he will only be remembered as the man who sentenced  Ned Kelly to death, and that will partly be the result of people like the Iron Outlaw guy misinforming anyone who looks at his website or reads his book. What a pity he hasn’t the integrity to honestly tell the whole story and allow readers to make up their own minds.
So here, to begin the discussion about Redmond Barry is an abridged version of  his achievements from Wikipaedia:
Sir Redmond Barry, KCMG, QC (7 June 1813 – 23 November 1880), was a colonial judge in Victoria, Australia,  of Anglo-Irish origins. Redmond Barry arrived in New South Wales in April 1837 and was admitted to the New South Wales Bar. After two years in Sydney, Barry moved to Melbourne, a city with which he was ever afterwards closely identified, arriving at the new Port Phillip Settlement on 13 November 1839. After practising his profession for some years, he became commissioner of the Court of Requests, and after the creation in 1851 of the colony of Victoria, out of the Port Phillip district of New South Wales, he became the first Solicitor-General of Victoria, with a seat in both the Legislative and Executive Councils. In 1852 he was appointed a judge of the Supreme Court of Victoria. Later he also served as acting Chief Justice and Administrator of the government.
Barry was noted for his service to the community, and he convinced the state government to spend money on public works, particularly on education. He was instrumental in the foundation of the Royal Melbourne Hospital (1848), the University of Melbourne (1853), and the State Library of Victoria (1854). He served as the first chancellor of the university until his death and was also president of the trustees of the State Library. He was the first President of the Ballarat School of Mines (1870), which later became the Ballarat University and now Federation University Australia.
Barry was the judge in the Eureka Stockade treason trials in the Supreme Court in 1855. The thirteen miners were all acquitted.
He chaired the committee for the Victorian Intercolonial Exhibition in Melbourne, he represented Victoria at the London International Exhibition of 1862 and at the Philadelphia Exhibition of 1876. He was made a knight bachelor in 1860, and was created a Knight Commander of the Order of St Michael and St George (KCMG) in 1877.
There a couple of other Kelly myths about Barry, beside the one that he was a ‘villain’. One is that after he sentenced Ellen Kelly for her role in the Fitzpattrick affair, he said he would have sentenced Ned Kelly to 15 years in prison for his role in it, if he were there too. The first known mention of this purported remark  is by  GW Hall in “Outlaws of the Wombat Ranges” and then later by J.J. Kenneally and  Max Brown, in his 1948 biography ‘Australian Son’. (Stuart Dawson describes the way this myth grows in the first comment at the end of this Post) The IO fanatic repeats this lie on his website and in his very recent book, and yet many years ago Ian Jones reported there was no record anywhere of this having ever been said. Ian Jones also said it would have been totally out of character for a Judge of Barrys stature and competence to have made such a remark, and he dismisses it as a fable.
The other myth about Barry and Ned Kelly is the claim that Kelly forecast Barrys death. What actually happened was that immediately after Barry had finished pronouncing the sentence  with the words “May God have mercy on your soul” Kelly replied saying “I will go a little further than that and say I will see you there where I go”
I can’t see how that is a prediction of imminent doom, as Kelly fanciers claim. Rather I see it as Kelly mocking the judge and saying, effectively ‘if you think you’re better than me, you’re not and when you die, you’ll be in the same place as me’ Ned Kelly as we know, had an extraordinary way with words and a very quick tongue.
But Barry was an old man, 67 and a diabetic. Three weeks later he died with a complication of an abscess that developed on his neck. But he outlived Kelly, and contributed massively to the cultural richness of Melbourne not only then but even now, through the Library , the Hospital and the University and other institutions that he promoted and supported.
Now, Kelly fanciers thought it was terrific when Aidan Phelan wrote a piece about Ned Kelly that  said this about him : “The first thing we need to look at is the debate about whether Ned Kelly was a hero or a villain and why people dig their heels in on a particular side. It’s very easy to forget that Ned Kelly was a living, breathing human being. He had loves, hates, family, friends, skills and talents just like all of us.”
Now, I agree with that, even though its stating the obvious, but I ask, would the Kelly sympathisers extend the same understanding to Sir Redmond Barry?
(Visited 86 times)
Comments (24)