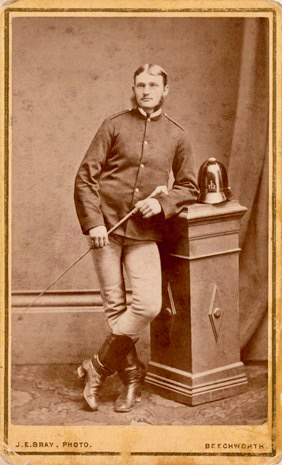 Last week I described Alan Crichton’s Fitzpatrick Conspiracy theory, and pointed out what it would mean for the traditional Kelly mythology if it was accepted. Crichton’s theory is that the Fitzpatrick incident was a plot devised by Brooke-smith and Whelan with the aim of  getting at Mrs Kelly. According to Crichton, Ellen Kelly was the ‘heart and soul of the Clan’ and getting rid of her would have been a major strike at the troublesome selector family.

To make this happen Brook-smith and Whelan needed an incompetent and morally bankrupt policeman who could be manipulated into doing their will, and according to Crichton, Fitzpatrick fitted the bill! I noted last week that Crichton had written “I don’t like the guy” and guessed that was an understatement – well he’s more than confirmed it this week with this post to a Facebook page “This bloke was an arsehole the moment he popped out of the womb”.

The idea that Fitzpatrick was ‘an arsehole’ from birth is actually the fatal weakness in Crichton’s conspiracy theory. Ask Kelly sympathisers and Crichton to detail what facts they know to substantiate this claim and the only things they can offer are slander about his personal life – I will come back to that – and things that happened AFTER the ‘incident’. There is simply not one shred of evidence anywhere, including on his police record, that in his year in the police force BEFORE the ‘incident’, that Fitzpatrick was anything like the rotten character Crichton needs him to be to fit into his conspiracy theory, or for that matter the rotten character the Kelly sympathisers needed him to be to sustain their character assassination of him. Not one shred of evidence. The only evidence we have of Fitzpatrick’s character leading up to the ‘incident’ suggests he was an entirely satisfactory policeman. Here’s what Standish had to say about him to the Royal Commission:

Q182. “Were you aware before this man Fitzpatrick was sent there that he was a man of bad character ?”

Smyth was a Crown prosecutor, and, according to his Obituary  ‘was for many years the leading man”.  Whelan had nothing to say to the Commission that was adverse about Fitzpatrick in respect of the nine months he worked at Benalla, and Constable Thomas McIntyre described him as “a decent young fellow”. An entry in Fitzpatrick’s Service Record, dated 22nd June 1878 says “An efficient constable”.

Against these facts, and no doubt greatly contributing to modern day hatred of Fitzpatrick like that exhibited by Crichton, we have Ian Jones baseless allegations in ‘A short Life’ that Fitzpatrick’s ‘first year in the force had been a chapter of unreliability, bad company, narrow scrapes and a fondness for liquor”. This is outrageous because there is simply not one fact to support this ‘verballing’ of Fitzpatrick – and several facts, already quoted, that directly contradict it.

Peter Fitzsimons, like Jones and just about every other Kelly author joined in this baseless character assassination writing of Fitzpatrick before the ‘incident’ that “He is neither dutiful nor diligent, neither honest nor humble, not courageous nor courteous. His key passions are pursuing the fairer sex and drinking, though usually in the reverse order…..Since joining the police force in April of the previous year his police record  has been a litany of louche laxity, ill-disciplined drinking, slovenliness and being placed on official reports” Again, this is an outrageous verballing of the man – there are ZERO facts – no evidence AT ALL to support this description of Fitzpatrick in the lead up to the ‘incident’.

Later of course, as every Kelly sympathiser knows off by heart, like a line in a Kelly Catechism, Fitzpatrick was described as a ‘liar and a larrikin’, and he was eventually dismissd from the force in disgrace. I will discuss all that in Part Three, but for now I am interested in what we actually know about Fitzpatrick’s character and service BEFORE the ‘incident’. Already we have established that before the incident his service record and reputation as a policeman were unremarkable.

What I now want to focus on are the facts about his private life which have been used to create the popular belief that Fitzpatrick was a sleazy womaniser, a morally bankrupt sexual predator. Crichton called him ‘a philandering drunkard’. The facts said to support these claims are that he was engaged to someone who was already pregnant, and he had previously fathered a child in an earlier relationship with a woman called Jessie McKay, from Meredith. There is also the claim that he was pursuing Kate Kelly.

The circumstances of the prior relationship that produced a child are not well known, but Fitzpatrick paid maintenance for the child, something even today many young men do their best to avoid doing if at all possible – so his example in that regard was a good one. We also know that Fitzpatrick married his pregnant fiancé and the marriage was apparently long lasting and successful, something which I think at the very least again speaks to something positive in his character.

As far as the interaction with Kate is concerned, Mrs Kelly only ever said that Fitzpatrick had tried to kiss her. Kate herself initially denied that Fitzpatrick was ever there, then later changed her story but curiously didn’t offer it in support of her mother’s defence at her trial. Why not, if it was true? Surely it would have helped her mother.  Some months later Kate was reported to have said that she was at home alone when Fitzpatrick arrived, and that he immediately began to behave ‘improperly’ toward her but then Ned Kelly burst in and drew his gun. That scenario if true would make a liar of Ned Kelly who said he wasn’t there, and a liar of all the other supposed witnesses who said it was Fitzpatrick who drew the gun and that Kate wasn’t home alone. Ned himself contradicted his sisters claim saying that “If he (Fitzpatrick) or any other policeman tried to take liberties with my sister, Victoria would not hold him”.

There are therefore many good reasons to have serious doubts about the truth of the claim that Kate was molested by Fitzpatrick, but if Mrs Kelly is to be believed it was no more than an attempt to kiss her. If Ned is to be believed nothing happened, and as for Kate, which of her three stories should be believed? These deep uncertainties demand caution in the formulation of narratives around this issue but they are ignored by the Kelly sympathisers in their determination to vilify Fitzpatrick, and they routinely claim he attempted to rape – or actually raped – Kate Kelly. This is an outrageous slur that should be challenged every time someone utters it but pro-Kelly Facebook Page moderators never do. Their interest is not in the true story but in perpetuation of whatever myths and lies support their hero-worship of Ned Kelly, and repetition of any anti-police lies and hate that anyone cares to voice. But lets be honest here : paying child support and having a pregnant fiancé – which is what we actually know about Fitzpatrick –  is hardly the stuff of moral depravity.

There’s one other thing about the Kelly supporters routine, holier-than-thou vilification of Fitzpatrick that requires comment : it is deeply hypocritical, and I am sick and tired of it. The apparent sense of moral superiority that motivates their ridicule and scorn of Fitzpatrick because he was paying child support and engaged to a woman already pregnant is accompanied by a very deep denial of the manifest moral failures of innumerable members of their own clan – the arsonist Jim Kelly, the sexual predator James Quinn, the serial fornicator Ellen who conceived to three different men out of wedlock, the unfaithfulness of Annie Kelly who bore a daughter to a policeman while her own husband was in prison, the prenuptial impregnation of Ellen Barry aged 15 by Aaron Sherritt, the drunkenness, the lying and stealing, the bashings and domestic violence suffered by Margaret Quinn, the horrific animal cruelty of John Lloyd ….the list is almost endless and the Kelly-lovers hate it ever being mentioned.  They don’t want anything to disturb their deep denial of Kelly clan depravity – but really, their extreme judgemental attitude to Fitzpatricks minor failings is just sickening hypocrisy. Its time for them to face reality : Fitzpatrick wasn’t  an arsehole from birth, he wasn’t the villain : the Kellys were.