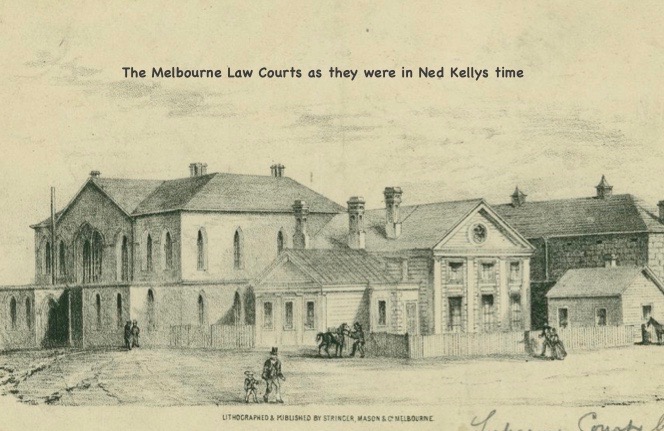 The National Trust have focused on Ned Kelly for this year’s summer school holiday program (22 December 2018 to 29 January 2019), and I went along on opening day to have a look. It was a rare opportunity to check out the Law Courts building’s main court, which is not normally open, but is open Saturdays during the holidays. This is not the building in which Ned Kelly was tried. He was tried in the old Criminal Court building on the same site, that was fire damaged in the 1890s and was demolished in 1910. The present gothic style building was built in 1914, and long postdates Ned Kelly. Nevertheless, I thought it well worth a look. The Old Melbourne Gaol has been turned into a Kelly showcase for the holidays, with Ned souvenirs aplenty in the gift shop. There are even Ned Kelly mask socks – “one size fits all”, just like the hangman’s rope.

There are three school holiday activities about Ned.

First, for little bushrangers (5 years up), there is “A WORD FROM NED, a code-breaking hunt activity”. The blub says, “Ned Kelly is remembered as many things. But what about his own memories? Get a deeper glimpse of the man beneath the armour with a code-breaking activity that will send you and your friends on the hunt through every nook and cranny of the Old Melbourne Gaol. An important message in Ned’s words awaits those who keep their wits sharp.” I had a look at the activity sheet, and judging by the illustrations without doing the activity myself, my guess is that it told the story of a sadly misunderstood horse thief whose catchphrase was “gender equality”. But I could be wrong.

Second, there is the “Think You Know Me?” Ned Kelly virtual reality experience. This was my first encounter with VR. You sit on a stool in an otherwise empty cell, don an Oculus VR headset and earphones, and spend about 4 minutes experiencing a 3D recording of Kelly sitting in and walking around the cell speaking directly to you. It is set on 29 October 1880, just after the trial. The image is a little hazy at the edges at times, but quite impressive. The best bit was when Kelly walked across the cell and drank from a mug on a side table – all in VR; there is no actual table or props, and it was superb technically.

The problem is the recorded narrative. We get Kelly with a strong Irish accent (wrong), a warder’s voice calling him “bog Irish” (a result of the wrong accent); his complaining about being locked in his cell 23 hours a day (outrageous); his calling his barrister “that idiot Bindon” while whinging about his 7 guinea lawyer (which the taxpayers paid for), the “most inexperienced barrister in the colony”. We get the claim that he killed in self-defence at Stringybark Creek; the boast that “if I could speak” (which he could have, if he had made an unsworn statement); a laughably stupid line that “the common man’s tongue is a dangerous weapon in this land of wigs and [I didn’t catch the last word, but I think it was lords]”; the boast that “had I examined the witnesses myself I would have brought a different conclusion”, or words to that effect, ending with some of the famous lines penned by his solicitor Gaunson when Ned was in the Beechworth Gaol in August 1880 (the “blameless life” speech) and claimed by him as the words of Kelly: “let the hand of the law strike me down if it will”, etc. So the content was mostly historical rubbish, but well worth extra the $5 just to experience the VR.

The third holiday activity is a twice a day, half hour performance on Saturdays, by two actors called “Such is life”, free with your admission ticket. It is series of short episodes telling a potted Kelly gang story, and not just about Ned and his mum in gaol. On the good side, the actors were excellent, playing several changes of roles with quick costume changes, and some interactively including three audience members nabbed as volunteers during the portrayal of the Fitzpatrick incident. They were whispered a couple of short lines each and carried it off well, much to the delight of the audience. The scene of Mrs Kelly saying goodbye to Ned was the last episode in the series.

Now to my historical critique: it was complete rubbish almost from start to finish, based heavily on Ian Jones’ erroneous mythology. It is presented as “the real story” as told by Mrs Kelly, and kicks off with the old tale of the police always looking to put the Irish down. If that were true, why do we hear no claims of such bias around the rest of Victoria? We are told that Ned’s father was proud as punch when Ned saved Richard Shelton and was given the green sash. Jones “Short Life” 2003: 18 dates the rescue to late May 1865. Graham Jones in “Ned Kelly the larrikin years” says that Red (Ned’s father) died in December 1866, and that it was after Red’s death the rescue event took place. This is supported by a 1973 letter from descendant Mrs Shelton in the Benalla Museum which places the rescue on a hot summer’s day in 1867 and so after Red’s death; but the fiction is a popular one. Following Ian Jones, we have Ned becoming “the man of the house” at 12 after the death of his father. We then get an appearance from Harry Power, who “taught Ned things you’d pay guineas to learn”, which I think draws directly on a couple of lines from Jones’ Last Outlaw mini-series in its Harry power section. Similarly, we get Power saying that he taught Ned to carry a gun but never to use it, and to respect women, etc.

Next comes Kate Kelly talking about Fitzpatrick’s advances to her even thought she was only 14 at the time; that he smelled of brandy when he arrived; that he had a telegram but no warrant; Fitzpatrick making a grab at Kate as she passed him; Dan leaps to her defence; Ned comes in and shoots at Fitzpatrick and misses; Fitzpatrick cuts a wound in his own wrist to falsely blame Ned; the boys then go bush (gold panning), and Ned writes offering to surrender himself if Mrs Kelly is released, presented as a realistic offer that should have been accepted. Ned come back on stage and we get Jones’ Stringybark Creek body straps myth. Ned says McIntyre surrendered, but “Lonigan was a fool”; then the other two came back to fight (so the fair fight myth); “We were compelled to kill them”; that there was a lot of sympathy for the wrongly persecuted gang in the north east, and that “We were not cold-blooded killers; it was circumstances that pushed us to what we became”. The word ‘republic’ is never spoken, but the dialogue implies it several times – “It was our country”; they had a plan; they began to collect plough shares to make armour. “We will take this country and make it ring with the name of Kelly”. Next we get Ann Jones from the Glenrowan Inn, who says the gang came to Glenrowan “to kill a lot of police”. 60 people were held, but some were sympathetic. There was dancing, singing, cards and whiskey, and even a jumping contest in the back paddock. (All at gunpoint…) Then the police arrived: at least the play has the Kellys firing first with the police returning fire. People were injured in the shooting and the police bullets “shattered the mantelpiece clock”. We are told, “the battle went on for 12 hours, until the hotel burned to the ground”. This unhistorical implies a more or less continuous 12 hour gunfight, which is ridiculous nonsense. Ann leaves us with the drivel that “they say” Barry rushed Ned Kelly’s trial so he could get to the Melbourne Cup.

The last segment enacts the meeting of Ned and his mother in gaol. “It’s to be tomorrow.” We are told that there were 50,000 signatures collected on the reprieve petition, a considerable increase on the actual 30,000 odd, which itself was at least double the real number as can be seen from whole pages in the same handwriting and with multiple surnames at identical addresses. We are told that on the Glenrowan hill there were 50 armed men, but Ned dismissed their help, i.e. the Ian Jones republic myth, and another indirect reference to the republic claim. We are told Tom Lloyd had told Mrs Kelly how he “nursed Ned in the bushes at Glenrowan” before the last stand. Ned tells his mum that he could have got away at Glenrowan, a claim we now know is rubbish. Then we get more from Gaunson’s fanciful August 1880 “blameless life” letter, often misrepresented as a condemned cell letter by Ned of 1 November: “If my life makes men see that men are made mad by bad treatment, and if the police are taught that they may exasperate to madness men they persecute and ill-treat, my life will not entirely be thrown away”, etc. Finally Ned walks across to stand on the gallows giving both sets of claimed last words – “Ah well, I suppose it had to come to this. Such is life” – exactly as Jones had it in his Last Outlaw movie. And as analysed and completely dismantled as nonsense in Stuart Dawsons free short article, “Ned Kelly’s Last Words: ‘Ah, well, I suppose’.” So a great play, great acting and role changes, and a terrific feel for audience presentation – but unfortunately more riddled with historical errors than the Glenrowan Inn was with bullets.