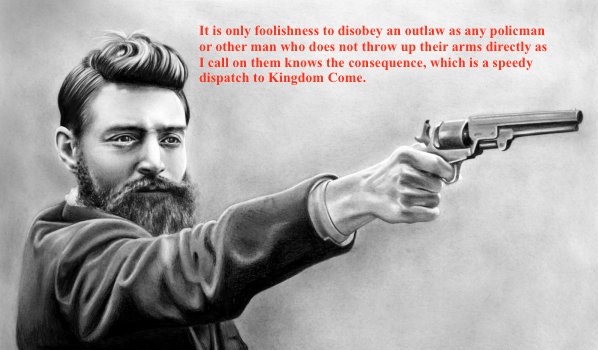 I was asked that question the other day, and after giving it some thought decided to make my answer into a post about Ned Kelly and the origins of his criminality. I am going to spell out my solution to the dilemma that the mythology of Ned Kelly creates, and explain why I believe the sympathiser explanation is wrong.

I think it would be fair to say that even the most determined Kelly fan accepts that Ned Kelly committed criminal acts. How can anyone say otherwise when Ned Kelly himself boasted that he was a prolific and successful stock thief? We also know that he was a notorious liar, he served time for assault and indecency, he served time for ‘feloniously receiving’ a horse, he was a bushranger’s “Apprentice”, a bank robber, police killer and thwarted mass murderer. These are all undeniable facts about Ned Kelly, and for the majority of ordinary people in Australia those facts greatly diminish their opinion of him, but for a small group, the sympathisers, they don’t. This is the surprising conundrum at the core of the Australian preoccupation with Ned Kelly, the way in which the same basic facts are interpreted in such radically different ways, what I referred to above as the dilemma that the Kelly mythology creates.

I think that when it comes down to it, when it comes to the meaning of ‘criminality’ the essential difference between people who support the Kelly mythology and those who don’t, is the question of motive. In fact, it could be argued I suspect, that to a greater or lesser degree, motivation is the essential component of what renders an act truly ‘criminal’. This is most certainly true for example when it comes to killing another human being. Its defined as ‘murder’ when it can be shown that there was a deliberate intention to kill someone, but as ‘manslaughter’ when the killing was unintentional, as not a crime at all when committed in self-defence, as your job if you work on Death Row in some American prisons or in a place where euthanasia is legal, and as an act of bravery which may be rewarded when committed in a war. But motivation is also relevant in lesser crimes: stealing food or money to feed a hungry family is not the same ‘crime’ as stealing for material gain.

Because of its understanding of that question of motive, the Kelly mythology, and Kelly sympathisers don’t see Ned Kelly as a true criminal. It regards Ned Kellys ‘criminal’ behaviour as acts of rebellion and defiance, that circumstances conspired to force him into doing, that were political to a greater or lesser degree and justified on the basis of the oppression and mistreatment he and his poor family suffered at the hands of the authorities, the Government, the judiciary, the police and the wealthy landowners. They see his words from prison as evidence of a motive which redeems him from pure criminality: “If my lips teach the public that men are made mad by bad treatment, and if the police are taught they may exasperate to madness men they persecute and ill-treat, my life will not be entirely thrown away”

In other words, the answer given in the Kelly mythology to the question of why Ned Kelly became a criminal, is that he wasn’t really a criminal at all. Instead they believe he was an essentially moral actor who was driven to criminal acts by external circumstances, by the intolerable situation he and his family found themselves in, and by his unwillingness to put up any longer with the unfair treatment they were receiving. As they say in the Kelly world, Ned Kelly decided to make a stand – essentially this explanation portrays the Kellys as victims who fought back, and not fundamentally as criminals.

My answer to the question of why Ned Kelly was a criminal, and the answer that would be given by most people outside Kelly country and the Kelly sympathiser echo-chambers is that firstly, the idea that the Kellys were victims rather than criminals, that Ned Kelly was driven to criminality by external forces of corruption and oppression is wrong. I will expand on this later. My view and the view of most Australians is that Ned Kelly was not a hero or an admirable and worthy icon but an actual criminal, and the Kelly myth explanations for his criminality are merely excuses.

Let’s start by examining these excuses, the foremost of which is Ned Kellys claim that he was a ‘forced outlaw’ the oppressed and harassed victim of police malpractice he claims to be in the famous quotation above about being driven to exasperation and madness by police who ‘persecute and ill-treat’. Well firstly, there is that devastating little fact of the “Royal Commission of Enquiry into the circumstances of the Kelly Outbreak”, an exhaustive and prolonged contemporary examination of the entire event. The very first of its five terms was “To inquire into the circumstances preceding and attending the Kelly outbreak” – in other words to look for the causes of the outbreak, the major one of which, if the Kellys are to be believed was police corruption and persecution.

The commission exposed all manner of police bungling and unprofessional, lazy cowardly and deplorable misconduct, as a result of which many Police were punished with demotions, censure, forced retirements and so on. But, in spite of the Commissioners willingness to expose bad behaviour by police one of their major findings was this: “No evidence has been adduced to support the allegation that either the outlaws or their friends were subjected to persecution or unnecessary annoyance at the hands of the police.” – NO EVIDENCE!

So, on the one hand we have Ned Kelly claiming he was driven to criminal acts by having been persecuted and ill-treated by Police, and on the other hand, after an exhaustive examination of these claims by commissioners who demonstrated they were more than ready to criticize and expose police malpractice, a report saying they found NO EVIDENCE of it. This finding more or less completely obliterates the Kelly mythologists claim that Kelly wasn’t a criminal but a ‘forced outlaw’, a moral actor responding to injustice.

At this point we should probably simply say “Case Closed” – Ned Kellys claim about persecution was just the usual complaint of criminals when caught, the whining that criminals continue to make to the present day that its all the fault of the police. What we are then left with is trying to understand the inconsistent stance of the Kelly sympathiser mob who reject this finding by the Royal Commission, but at other places accept and gleefully point to other Commission findings that they agree with. Rational people would agree they can’t have it both ways. The reality, in the light of the Kelly mobs response to such things as the findings of the Royal Commission, is simply that Kelly sympathy is not rational, its not confined by facts or logic and reason and is much more like a religious faith with its dogmas and sacred sites, annual pilgrimages and iconography, and immunity to rational debate or logic in respect of the articles of faith. To me, that is the only way its possible to understand the inconsistency between known facts and evidence and the beliefs of Kelly sympathisers. Theirs is a kind of religion. But I digress!

So even though the Royal Commission has already looked for, and at – and rejected – the claims of police persecution that the Kelly myth claims was the cause of the outbreak, to finish off this first part of my attempt to understand why Ned Kelly was an actual criminal, lets look briefly at what Ned Kelly cited in his famous “Interview” as an example of  this police persecution and ill-treatment. The Interview took place inside the Beechworth Gaol in August 1880, by which time Kelly had been caught, his brother and the rest of the Gang were dead, and he was awaiting trial.

In the “Interview”, having just complained that city folk had no idea of the ‘harsh and overbearing manner in which they (the police) execute their duty or how they neglect their duty and abuse their powers” Ned Kelly was asked:

“Can you give any instance of which you complain?”

“Kelly: I can. McIntyre in his evidence said I told him that Lonigan had given me a hiding in Benalla. It is not true that I ever said this to McIntyre. But I will tell you what the real facts are ….”

He went on to describe the brawl in the Benalla bootmakers shop, when he was trying to escape from police custody as they marched him from the lock-up to the Courthouse. It was during this struggle that Lonigan applied the ‘squirrel grip’ to Ned Kellys testicles. Kelly claimed he suffered ‘excruciating pain and inconveniences’ as a result, but he said the pain completely disappeared the day he killed Lonigan at Stringybark Creek. (A psychologist would no doubt have some very  interesting comments to make about that very peculiar phenomon)

But more importantly this answer of Ned Kellys is stunning, almost beyond belief, in its expression of utter self-absorption. Here we have a man, who according to the Kelly mythology was a visionary leader with a plan for revolution and a Republic, a man who was prepared to murder countless police in order to make a stand against what we are asked to believe was a systematic prolonged and oppressive campaign of abuse and persecution against his clan, who now, when asked to describe an example of the sort of thing he was rebelling about can only cite an incident that was entirely of his own making, and it wasnt about the poor or the oppressed but entirely about himself. Oh yes he claimed the drunkenness for which he was arrested was caused by someone spiking his beer – in other words, as usual, it was all the fault of the police – but in the end it was his own deliberate actions, his futile attempt to escape that resulted in the brawl and all its ‘inconvenient’ consequences. Instead of a fine of ONE shilling for being drunk, as a result of his stupidity someone ended up having to pay EIGHTY-FIVE shillings! And these were people who were supposed to be poor. But as an example of police persecution, of harsh and overbearing behaviour, of ill-treatment – that pathetic story just doesn’t cut the mustard. Its a joke!

How on earth can Kelly sympathisers mount a case against the Commissions findings that there was no corruption and persecution when Ned Kelly himself, given the opportunity to describe an example of it could only come up with a complaint about a mess that was entirely of his own making? That’s the best Ned Kelly could come up with at a time when the stakes couldn’t have been higher for him?

A rational person really has no option but to accept the conclusion of the Royal Commission’s that there was no persecution. This finding fatally undermines the central claim of the Kelly mythology, the claim made by Ned Kelly and his sympathisers that he was a ‘police made’ criminal, that he had been ‘made mad’ by police ill-treatment and harassment, and means we have to look elsewhere to explain why Ned Kelly became a criminal. I’ll do that next week.

2 Replies to “Why did Ned Kelly become a Criminal?”