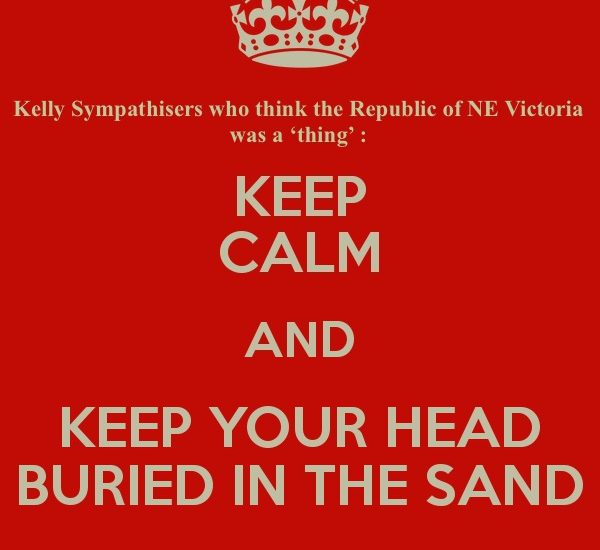 In the last few days I witnessed more of the pathetic behaviour that is typical of Kelly sympathisers, and I am drawing it to your attention in this post so that nobody will be in any doubt about the quality of apologists for Ned Kelly.

I’ve made no secret of the fact that I have been blocked and banned from almost all Kelly-related Facebook and other sites on the Internet, a fact which delights Kelly apologists because they can’t cope with coherent rational fact-based challenges to their unhistorical Kelly stories.  As you will see, I am not banned for abuse or for vulgar language or bad behaviour of any kind but for expressing an opinion that the Kelly sympathisers don’t agree with. They’re not interested in alternative opinions or in ‘debates’ because they always lose them, as they discovered last year when trying to defend their hateful vilifications of Fitzpatrick, and the false belief he died of cirrhosis of the liver. I ask you, what kind of person insists they are unquestionably right and that someone died of cirrhosis of the liver when the doctor who actually saw the dead body and did the autopsy writes on the death certificate that he died of something else and makes no mention anywhere of cirrhosis or alcoholism or any other related disease? What kind of person just sticks his or her fingers in their ears and just carries on screaming “No, No, No he died of cirrhosis, he was an alcoholic” When a person is so utterly resistant to facts and evidence you really just have to write them off as mad fanatics.

And for the most part we now have to concede, that’s what Kelly apologists are – mad fanatics who are completely immune to logic and the irresistibility of facts and reason. This is why at Chiltern in April I  fully expect that Mr ‘Keep your Powder Dry’ Crichton will be regurgitating a conspiracy theory as fact the now disproven Kelly myths about Fitzpatrick, why Mr  Steven ‘Historical Consultant’ Jager will be regurgitating a conspiracy theory as fact the now disproven myths about the Kelly republic, and Mr Brad “Give me an effing break’ Webb and the dunce who calls himself a ‘Neducator’ will be regurgitating god only knows what garbage as fact, and the uncritical audience of Kelly sycophants will no doubt lap it up. I would of course be absolutely delighted to hear they all have had a change of heart and instead presented accounts based on research evidence from the 21stcentury, but I am not holding my breath.  I’m expecting they will just keep thier heads deeply buried in the Kelly quicksand and hope nobody can see what they’re up to!

Out in the real world, away from their echo chambers and Members-only Forums their tactic in response to my challenges has been either personal attack and abuse, or else deletion of my posts and blocking me from making any more – or both. In case someone is tempted to think I am making this all up, it has happened yet again, exactly as I have described above in the last few days on the Introduction to Ned Kelly Facebook page operated by Jack Peterson. This is what happened:

Peterson posted a couple of paragraphs taken from a longer piece of prose attributed to Ned Kelly. They are well-known words, and the paragraph begins with “I do not pretend to have lived a blameless life, or that one fault justifies another…” Peterson claimed that Ned Kelly dictated these words to his solicitor, David Gaunson while on Death Row, in November 1880.

But Peterson was wrong on two important counts. Firstly, these words first appeared three months earlier than Peterson said they did, in the form of an Interview published in the Melbourne Age on 8thAugust 1880 while Kelly was in Beechworth prison awaiting his committal hearing. And secondly, these pious sentiments, so unlike anything Kelly ever said either before or afterwards, were immediately recognised as being words placed in his mouth by David Gaunson, preparing a defence for Ned Kelly and attempting to soften the public image of his murderous client. Those two errors are not earth-shattering, and they are commonly made but I thought worth trying to correct, for the record.

For some reason  the settings on Petersons FB Page had changed making it possible for me to post a response ( as Dee ), which I did. Heres the screen shot:

I also posted in support of a comment by Greg Brown : 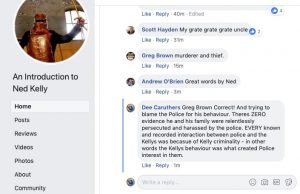 Jack Peterson, who elsewhere has called me ‘a nasty piece of work’, responded saying I was wrong, but didnt say why, and not long after that he deleted all my comments and blocked me once again.  On the other hand, having not deleted it, I presume he supports this foul contribution from the Toad:

So there it is: in response to some facts and information, because it contradicts their dogma, Kelly fanatics once again attacked me personally, my comments were deleted and I was once again banned! Facts are not acceptable but abuse and lies from the Toad are!

What I can’t understand is why Peterson couldn’t have just admitted he had made a mistake and corrected the record? I also can’t understand how someone who reckons he’s been studying the Kelly story for decades is so ignorant of a basic fact, something which can be found in almost any Kelly book : Its on Page 213 of Mcmenomys Illustrated History, (1stEdition), Page 606 of Kelvyn Gills Definitive Record, and Page 364 of the 2008 edition of Ian Jones book, three  works I thought a Kelly fanatic like Peterson might own. If he owns them its time he started reading them – but then again Kelly fanatics aren’t known for their interest in reading stuff. Case in point? The Kelly toad openly admits he hasn’t read even half of the book he’s been attacking with a wet bus ticket for the last seven years!

I am posting this comment here because unlike Facebook comments, Posts on a Blog remain discoverable, and I want anyone investigating the Kelly story to know very clearly what kind of intolerant, abusive and ignorant people the majority of Kelly apologists are, and how resistant they are to the possibility of change and to learning.