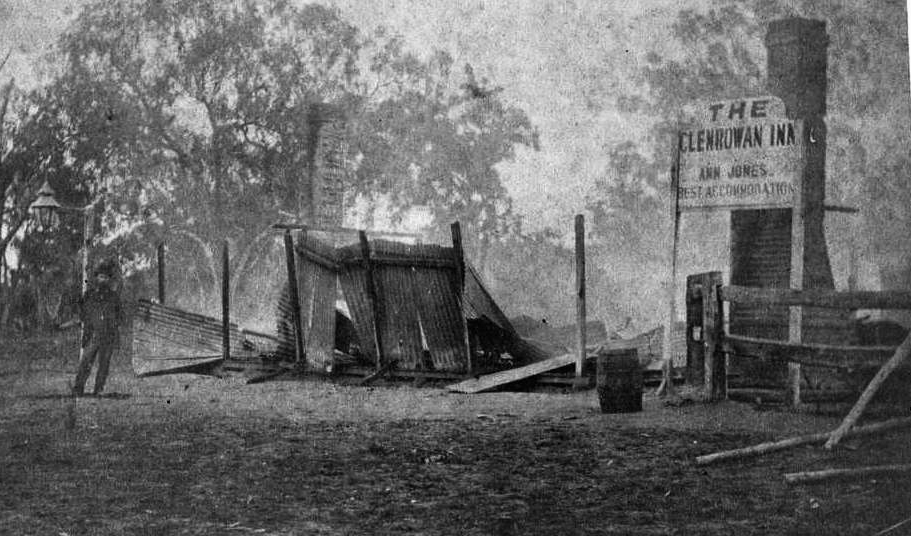 This weekend marks the 139th year since the demise of the Kelly Gang at what has become known as ‘the siege’ at Glenrowan in 1880. Kelly supporters have for decades portrayed this event as something worth commemorating, and make all kinds of grand claims about the symbolic meaning of the siege, that it was an example of mateship, of bravery under fire,and  of being prepared to die for something you believe in. There’s also the clam it was an attempt to trigger a rebellion and to establish an independent republic of North East Victoria, a plan that was supported by a small ‘sympathiser army’, that when all hope was lost Ned Kelly bravely outsmarted the police to visit the Army and urge them to return home. This all is supposed to mean that Kelly would have been a great General if ever he had control of a real army!

According to the legend Ned  Kelly then attempted to return to rescue his brother and Steve Hart, still trapped in the Inn.  And of course there’s Ned Kellys ‘last stand’ depicted in a  thousand posters t-shirts and tatoos showing Ned Kelly in armour, advancing on his own towards the encircling police lines in a doomed attempt to take down as many police as he could before he was finally brought down.

Often, in recent years this grim anniversary has been marked by some sort of event, usually a dinner somewhere in Kelly country, but the one planned and advertised for 2019 has just been cancelled. Only a handful of people had booked to go, but the organiser said it was cancelled because of illness. On various Facebook pages sad regretful and  solemn posts are being made to remind everyone of the significance of the date and of the tragic loss of young life, others are toasting gang members, visiting graves, laying flowers and paying their respects “to the men women and children on both sides”.

The suggestion that there are people we should pay respects to “on both sides” is actually offensive nonsense. On one side there was a gang of triple police murderers with a plan for even greater mass murder, and on the other their victims. What kind of  ‘respect’ does murdering a close friend demand? What kind of respect does a plan that involves hostage taking,  wrecking a train, murdering survivors and robbing banks demand?  What kind of respect should be offered to the gang who murdered three police at Stringybark Creek?  I just hope nobody will be suggesting that at any commemoration of the Lindt Cafe siege or the Port Arthur massacre we should pay our respects  to ‘people on  both sides’.

The cancellation of the Siege Dinner because of “illness” – which might have been made worse by the fact that almost nobody wanted to go – is a sign of the times, and something I’ve been pointing out for a long time : interest in Kelly myths and lies is shrinking rapidly to the point where almost nobody supports it any more. That’s why crowd funding of pro-Kelly  movies failed twice, why the Beechworth Weekend  has  disappeared without trace, why the Chiltern Kelly seminar flopped, why the NK Center got no money from local government and no money from the public in their latest Go Fund Me campaign, why no pro-Kelly books are being written any more and why Kelly related FB pages are either shutting themselves down, being shut down by Facebook because they’re  not much more than  message boards for abuse and vilification or are just recycling the old tired disproven fairy stories of Ned.

And as as for the magnificence of Ned Kellys  plan for Glenrowan : it was so poorly planned that it went wrong even before it began, with the decision to use armour! It went wrong as soon as Joe Byrne murdered Aaron Sherrit – instead of quickly departing so word could be sent to Melbourne that the Gang has emerged from hiding, the idiots and their supporters hung about for hours ensuring the police remained in Aaron’s house and enormous delays resulted It went wrong when Kelly tried to rip up the  railway lines – he didn’t have the right tools. It went wrong when he woke up the men in the tent- they didn’t have the tools or the know-how either. It went wrong once they started collecting hostages because then Curnow learned what was planned, and Curnow, the true hero of Glenrowan stopped the police train and saved countless lives.

There cant be any argument about the siege other than that it was a massive disaster for Ned Kelly  and his gang. The provision of free drinks at someone else’s expense -Ann Jones’ – and a few games of hop,step and jump and some dancing can’t conceal the reality of how great a debacle  this entire scene turned into. It failed to achieve even one of its objectives, other than the cowardly murder of Aaron  Sherrit at point blank range, but worse, it resulted in the loss of innocent lives, the death of Ned Kellys own younger brother and two other gang members, and the great ‘general’ himself brought down and soon to face the hangman’s noose for the murder of Lonigan at Stringybark Creek.Ned Kelly, the leader of the gang was responsible for six deaths that day – three gang members, two hostages and Aaron! What an appalling legacy!

Can someone please explain what on earth Ned Kelly did at Glenrowan that deserves anyone’s respect? If anyone should be remembered this weekend and the person  most deserving of respect was the disabled school teacher Thomas Curnow. He risked his life to save not just dozens of police and innocent passengers  but innumerable horses from horrible deaths in the train wreck , lingering deaths from delayed complications of injury and entire lives of anyone who might have survived blighted by physical disability and pain.But so far in all the pitiful wailing about Joe and Ned on Facebook there hasn’t been a single mention of Curnow.

Kelly supporters seem to be blind to what’s happened to their myths : they’ve all been blown away, people have learned the truth about the outbreak, have lost interest in the fairy stories of Ned and no longer wish to remember him or his life of crime and chaos.

8 Replies to “Glenrowan : a debacle best forgotten about”