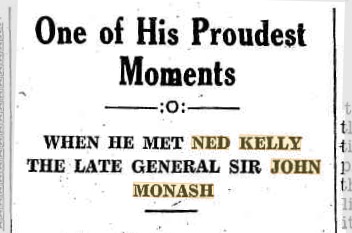 General John Monash the great Australian war hero told a story about meeting and speaking to Ned Kelly during the Kelly Gangs raid on Jerilderie in February 1879, when he was 12. He reportedly said it was one of the two most proud moments of his entire life, and it seems the town of Jerilderie is planning to immortalise this meeting with a life sized bronze statue, showing Ned Kelly giving the boy a shilling for holding his horse. I learned the other day that the Jerilderie Monash Committee along with the local Council and the Jerilderie Lions Club have  submitted an application for $200,000 to the Service NSW My Community Project Fund,  and they will find out next month if they’ve been successful. The Ned Kelly Statue proposal is competing with a variety of local  sporting cultural and community organisations for the funding, and the project that gets the money will be the one that has the most community support –  the winners are decided by a community voting system – so , at one level it will be a proxy for how much support Ned Kelly has in the area! The result will be an embarrassment for Kelly supporters I expect.

I will be amazed if this project gets up, but if it does it will be because the community has been egregiously misinformed about an event which didn’t actually happen!  Yes, thats right , Monash never met Kelly, it was just a story  he liked to tell, like many other colourful yarns he was known to have spun over the years , to enhance his image and keep his companions amused!

We know this story is a fantasy because Monash didnt mention it to anyone for at least 40 years after it was supposed to have happened, and yet he claimed it was one of the proudest moments of his life. We know it is a fantasy because Monash was a prolific diary  writer from a young age but he never wrote about it anywhere, ever. We know this story is a fantasy because  on the several recorded occasions when he told it, he gave differing accounts of what happened and where – on one occasion it was on the verandah of a hotel during the bank robbery,  on another  he said it was at his fathers home where Ned Kelly had arrived to sell stolen horses; on one occasion he said he was given a shilling on another a lecture about life, on another both a shilling and a lecture. Monash said it happened when he went to the local school – but we know that in 1879 he was a schoolboy in Melbourne. We also know that he was in Melbourne starting the school year in 1879 when the Kelly Gang raided Jerilderie. 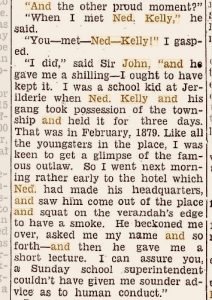 In fact, though most Monash biographies repeat the story of his meeting with Ned Kelly, many of them do so with a wink and a nod  rather than an outright declaration that Monash made it all up. Grantlee  Kieza wrote “We only have his word for it that he had a long meeting with one of Australias most  colourful and infamous criminals but he will recite the story so many times that it acquires the flavour of truth”. Ah yes, the ‘flavour of truth’, also nowadays called ‘truthiness’ , euphemisms for ‘not actually true’. The difficulty is that Monash is a genuine hero and nobody wants to point out the feet of clay! But its pretty obvious :he loved to be the centre of attention and he could spin a good yarn.

The other reason I will be amazed if this project gets up relates to the observed – indeed pronounced – sharp decline over recent years in public  interest in the Kelly mythology.  Its clear that Australias love affair with the Kelly myth is almost over, something thats nowhere more starkly – and embarrassingly – on display than in the Ned Kelly Centres fundraiser for the Glenrowan Kelly Center. They launched a Go Fund Me campaign to raise $150,000.00 on May 31st and so far have raised $50. A couple of years ago the promotor of this Center, Kelly descendant Jo Griffiths was given ‘in principle support’ by Indigo Shire but they didn’t hand over one cent. Who remembers the “Ned Kelly Alive” report? Over a year ago, at massive ratepayer expense it made all kinds of heroic predictions about the huge returns investment in Kelly tourism projects would bring to ‘Kelly country’ but like several similar reports written over the years , this one has also been ignored. I am not aware of anything in the pipeline. Nor have I heard any more about the proposed restoration of the Kelly homestead in Beveridge, announced in 2016. The promotors of Ned Kelly Educational tours and camping trips have all folded, the Ned Kelly weekend has gone forever, several Facebook pages devoted to Ned Kelly have disappeared, have become members only sites  behind closed doors or are dead, a recent Glenrowan  Commemorative dinner was cancelled, the Kelly conspiracy theorists Seminar  at Chiltern this year had fewer than 50 guests…..on it goes!

Meanwhile, following on from Ian MacFarlanes Kelly Gang Unmasked, Dr Stuart Dawson has wrecked several important Kelly myths, Dr Doug Morrissey is popping up all over the place pointing out the unpalatable historical truths about the Kelly Gang, has two of three books exposing the mythology in print with a third due any day, and so far the only successful recent Kelly movie making has been “Stringybark” which depicts not  the myth about killing in self defence but the truth of the Kelly gangs insane murder of three police.  Should I also mention the success of my FB pages and this Blog, places which Kelly supporters have leaned to avoid because too often their challenges only expose their ill-informed Kelly mythology? So, if the people of Jerilderie are like Australians almost everywhere else, they won’t be voting for Ned Kelly, and the Statue is doomed!

If Jerilderie ever erects a life sized bronze statue of Ned Kelly giving a 12 year old John Monash a shilling, will it be seen as elevating the status of a police murderer to that of a General, or will it be seen as an insult to the memory of John Monash, a genuine Australian hero? Either way it will make the Jerilderie community and the Jerilderie Monash Committee look like idiots, for not knowing and understanding the true history of both men, one of whom was a murderer and shameless liar with nothing worthy of commemoration, and the other a genuine hero who could spin a good yarn.

So, Jerilderie,  times have changed! The fact is that Ned Kelly, like Rolf Harris, is now on the nose. Nobody is  erecting statues to Rolf Harris and none should be erected in honour of Ned Kelly.

10 Replies to “Is Jerilderie about to embarrass itself with a Kelly statue about something that never happened?”