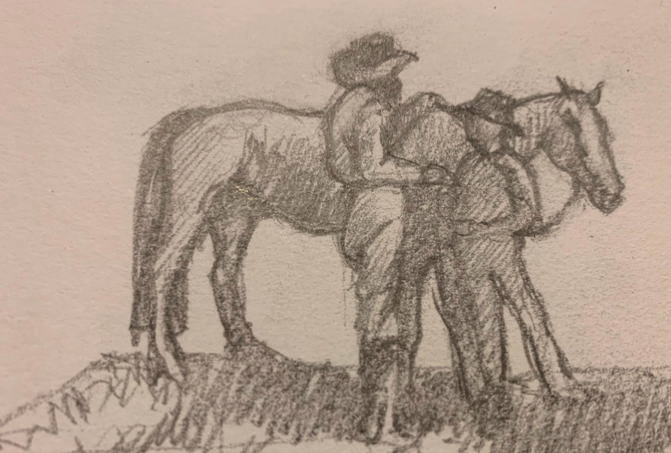 The picture above is the sketch that accompanied the application to the NSW Government My Community Project Funding programme, asking for $200,000 to erect a statue in Jerilderie showing Ned Kelly giving John Monash a shilling for holding his horse.

As I explained a couple of weeks ago, this story is a fantasy made up by John Monash in later life. I also said I would be amazed if this application was successful, and predicted the result would be an embarrassment to Kelly promotors, because recent history of  pro-Kelly projects have been consistent about one thing : failure!

Heres a list of the failures I can remember over the last three years :

On the other hand, theres been a remake of the memorials at Stringybark Creek, with an important change in emphasis  away from the Kelly Gang to the sacrifice of the Policemen killed there; a movie about Stringybark Creek with similar emphasis on historical truth rather than myth was successfully funded and has now been completed; there have been three books published that deflate the Kelly myths – two by Morrissey, with another in the works – and one by Kieza; there have been four academic papers by Stuart Dawson that similarly deflate important Kelly myths – specifically the false history of Fitzpatricks police record , of Metcalfs fatal eye injury, of Ned Kellys last words, and most important of all, the myth of a Kelly Republic, now dead after a short life of barely fifty years; Ned Kellys most fervent advocate has gone and there isn’t anyone to replace him; the only public Facebook portal for Kelly support is dominated by police haters and bullies whose comments expose their ignorance of the facts; a Kelly conspiracy theorists convention tanked; a History Channel documentary realistically exposed Kelly as a violent killer; a seminar about the armour was over-subscribed, and lastly Kelly supporters continue to be unable to answer the debunking of Kelly myths and lies  that are exposed almost weekly on this Blog!

So was I surprised when the Jerilderie Kelly statue plan didn’t get the votes it needed from the local community to get the funding its proposers wanted? No of course not. Its what I predicted – further evidence that the Kelly myths are no longer supported in the way they used to be in the past. People are better educated and will always be interested in Kelly history, but in true historical reality not the police hate, fantasy and spin of the now outdated Kelly Mythology that glamourises a murderous liar.

(Visited 158 times)
No comments yet