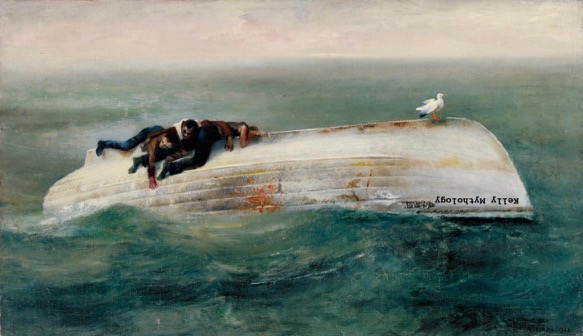 Recently someone objected to my use of the term “apologist” in relation to people who support Kelly mythology, saying it was ‘distasteful’. I think this is for two reasons, the first being that in general we tend to think of apologists as people who defend causes and viewpoints that most of us regard as indefensible, such as fascist right wing ideologies, land-mine merchants and cigarette manufacturers. Secondly, ‘apologists’ have a reputation for being entrenched and inflexible people who fight ‘dirty’ and use whatever tactic seems to advance their cause no matter how dishonest or underhand they need to be.

In fact, the dictionary definitions of ‘apologist’ only say that an apologist is ‘a person who offers an argument in defence of something controversial’. This definition of an apologist, like most of them in various ways, requires that to be an apologist a person not only actively campaigns and argues for something, but that ‘thing’ – which could be an idea, or a person or a process – has to be ‘controversial’. In another definition, the word used is ‘unpopular’ and in another ‘criticized or attacked by other people’. But there’s nothing in the definition that suggests apologists are people who necessarily resort to playing dirty – it’s just that it seems in reality that’s what people who adopt ‘controversial’ or ‘unpopular’ causes, or causes that are ‘criticised or attacked by other people’ tend to do – they tend to play dirty.

So from that perspective, I can see why someone might take exception to being labelled an apologist: they don’t want to be thrown in with people who play dirty, or have  the Kelly story likened to ethically dubious causes like white nationalism and arms manufacture! If you think you play fair and your cause is reasonable, you wouldn’t want to be labelled an ‘apologist’.

But here’s the point: the behaviour of most present-day defenders of the Kelly myths conforms to all the negative stereotypes attached to the word ‘apologist’. There are one or two notable exceptions of course, but its almost impossible to find a Kelly ‘apologist’ defending their beliefs by arguing about the substance of their claims, such as that Ned Kelly was a victim of persecution, or that he was a model son, or that Fitzpatrick was a womanising alcoholic or that Glenrowan was about something other than murder and revenge. Instead in recent years while all these beliefs of theirs, and many more have been under serious challenge almost the only thing that Kelly supporters have ever done in response has been to mount personal attacks and abuse everyone who has challenged them. So, while it may be true that not all defenders of the Kelly myths behave in ways that fit the negative stereotype of an ‘apologist’, most do. Don’t believe me? – check out the comments on any one of the two or three remaining pro-Kelly Facebook pages – observe the language used to describe academics like Morrissey, MacFarlane, Kennedy and Dawson, and the total absence of any attempt to actually debate the views expressed by them. The focus on vilification and abuse to the exclusion of almost everything else is staggering. Enough said!

But it wasn’t always this way. The centenary of Ned Kellys execution in 1980 gave rise to a massive revisionist approach to the Kelly story and for a time it looked as if the history books were going to be rewritten and Ned Kellys image rehabilitated. Academic seminars and symposia and respectful intellectual discussions about Kelly history were held, several doctorates and Kelly biographies and histories were written on related topics and there were public exhibitions, trial re-enactments, documentaries and movies made. It was a golden age of Kelly enthusiasm. Kellys advocates were actual academics and professors, as well as informed amateurs and history buffs and sympathisers everywhere thought all their Xmases had come at once.

But what happened was that all this academic scrutiny resulted in the history books not being re-written, the hoped-for rehabilitation was eventually seen to be unhistorical and rejected, the Outbreak as criminal. The academics moved on and with the passing of Ian Jones last year the Golden Age of Kelly came to an end. The collapse of Kelly scholarship has been so complete that there are no real apologists left anymore – instead there are just ‘sympathisers’, surrounding themselves with Kelly memorabilia and rather pathetically clinging on to disproven stories about Ned Kelly and the Kelly outbreak.  According to one dictionary, a sympathiser is ‘a person who agrees with or supports a sentiment, opinion, or ideology’. Another definition is ‘someone associated with another to give assistance or moral support’. Clearly that description would apply to everyone who thinks Ned Kelly was some sort of Australian hero and an icon. But, compared to ‘apologist’ its quite a passive state of affairs: all you have to do to be a sympathiser is ‘agree’ with the notion that Ned Kelly was some kind of hero. There are still plenty of people like that, but nobody is seriously trying to make the case for Ned Kelly any more. All they do instead is recite dogma and the occasional conspiracy theory to try to keep it afloat.

So where does the Kelly story go from here? Facebook arguments have achieved nothing  – at best, Kelly mythologists endlessly repeat debunked claims, at worst, and more often, they ignore the challenges and instead engage in vilification and personal abuse. Long gone are the days when anything resembling respectful rational debate took place. Instead, I think the time has come to turn to the institutional places where the myths are perpetuated and recycled, such places as museums and schools and tourist destinations, and every other place that talks about the Kelly outbreak. These places now have to be made familiar with all the recent discoveries and developments in our understanding of the Outbreak. They have to be helped to make changes in the story they tell to bring them into line with what we now know to be the true story of the Outbreak. Its time for the myths to be replaced with the actual historical truths.

What we now know for sure thanks largely to the scholarship of Morrissey, is that the Kellys and their extended family associates were not typical selectors, who mostly were hard working but poor, strict teetotallers and churchgoers, upholders of the law and supporters of the establishment. By contrast the Kellys were lazy, they didn’t work their selection, they didn’t go to church, they were drinkers, and they were not at all popular or widely supported in their local districts. Neither were they unfairly persecuted and harassed by police, but instead they attracted the interest of the authorities by their own actions, not just by being stock thieves but by acts of violence, arson, sexual assault and domestic violence and even animal cruelty. Their claims of harassment were merely excuses. All this is now well established, because the archives have now been opened to everyone.

The other dimension of the Kelly story that is now established, are the many parts of it that are pure invention. One, discussed on this Blog recently is the allegation that Ned Kellys sister was sexually assaulted by Fitzpatrick. Another is that Fitzpatrick was a womanising drunk who died an alcoholic – but there are many others, and many have been discussed on this Blog. The most important myth, debunked comprehensively by Stuart Dawson is that Ned Kelly planned to establish a republic in north East Victoria. Even Kelly descendants have now gone on record to say that Ned Kelly didn’t have a political bone in his body. The republic is dead and nobody should be talking about it any more.

The other thing that has to happen is that the idea that Ned Kelly was the embodiment of fair dinkum Aussie values has to be exposed as nonsense: lying and thieving, laziness and boasting are not Aussie values but they were the hallmarks of Kellys lifestyle.  Neither is disrespecting police an Aussie value– let alone trying to bail them up and then killing them. The claim that Kelly exhibited the genuine Aussie values of mateship, of respecting family, of showing the skill that would have made him a great leader, of treating everyone with respect and fairness are all contradicted by the evidence. He didn’t uphold those values. He should no more be regarded as an Aussie Icon than should Rolf Harris or Chopper Read.

Sympathisers of course will continue to believe in the Kelly mythology because its an appealing story that gives them something to dream about. But its not history, which must be why none of them are prepared to defend it.

Time for everyone else to move on.

4 Replies to “Where to from here for Kelly Mythology?”