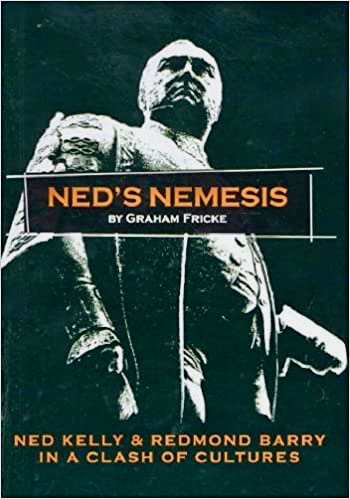 “Ned Kelly as we all know, was no angel. But how much better was his nemesis, Sir Redmond Barry, who sentenced Ned to death and who succumbed to Kellys courtroom curse by dying within two weeks of the bushranger’s execution?”

That question is asked on the back cover of “Neds Nemesis”, a small book written in 2007 by a former Victorian county court Judge, Graham Fricke. Fricke seems to think that though Kelly and Barry were from different sides of a cultural divide, their lives were in some strange way comparable and therefore its valid to measure one against the other.

In the Epilogue he writes of Barry “But despite the monuments – a University building, a street named after him, a statue – his fame has not increased posthumously. As the years have passed, the community has taken even less interest in the man than have the pigeons which from time to time leave their irreverent droppings on the head of his statue”

Of Kelly, he writes “Ned Kelly may have died a few days earlier than his antagonist Redmond Barry at a much more youthful age and at a time not of his choosing. But the cause for which he contended – broadly, democracy and fairness versus privilege and persecution – have in general terms prevailed.” In Fricke’s eyes the ultimate victor in this clash of cultures was Ned Kelly, even though he argues in the book that Ned Kelly was a victim of the unjust system that Barry represented and upheld. He summed up his understanding of Ned Kellys story this way:

“From today’s vantage point (Ned Kellys) experiences with the Law seem to have been characterised by inequity, furnishing an adequate explanation for Kellys rebelliousness and sense of oppression”

In other words, Fricke supports the idea that the Kelly story was not primarily one of criminality, but one of police and judicial oppression and inequity, and this behaviour was what caused Kelly to become an outlaw. “Inequity” in Fricke’s eyes provided an ‘adequate explanation’ – indeed, a justification – for the outbreak. This view is exactly the same as Ned Kellys : “ If my lips teach the public that men are made mad by bad treatment, and if the police are taught that they may not exasperate to madness men they persecute and ill-treat, my life will not entirely be thrown away.”

To establish his point about ‘inequity’, Fricke discusses in sequence many of Ned Kellys encounters with the law, highlighting in each case what he perceives as the inequity, beginning with the incident involving an alleged assault by 14-year-old Kelly on Ah Fook. He downplays the seriousness of the alleged assault calling it a ‘skirmish’ and writes, to my amazement that “we can ignore the fine details of the incident…. since Ned was acquitted”.  I would have thought that knowledge and an understanding of the detail surrounding the acquittal would be essential to understanding what happened –  but apparently its irrelevant if you’re acquitted! According to Fricke the inequity demonstrated in this case was institutional and related to the bail system, because the police used it to deny Kelly his freedom and keep him in custody “for more than a month awaiting a trial in which he ultimately achieved exoneration.”

According to Fricke, this prolonged unjustified incarceration of an innocent youth had serious consequences: “The by-then thoroughly radicalised young Kelly needed little persuasion from his mother to become apprenticed to the gentleman bushranger Harry Power”. An innocent youthful victim of an unjust system is ‘radicalised’ and propelled by it into criminality – exactly as the Kelly legend and Kelly himself claimed!

This argument sounds persuasive enough – until you decide not to take Fricke’s advice to ignore the ‘fine details’, and find out what actually happened.  For a start, Kelly was not  ‘exonerated’ or found innocent as Fricke’s language suggests – the defendant was ‘discharged’ because there were no witnesses for Ah Fook. In fact, it was generally thought at the time by anyone familiar with the ‘fine detail’ Fricke suggests we ignore, that Ned Kelly was lucky to have escaped conviction– in other words if there was any ‘inequity’ in the case, it was Ah Fook who was on the receiving end of it, not Ned Kelly! Much worse for Fricke’s ‘radicalisation’ argument though is the fact that Ned was not held in custody for “several weeks” or “more than a month” but only for 11 days, surely nowhere near enough time for the boy to become ‘thoroughly radicalised’? Not only does Frickes attempt to portray Kelly as a victim of ‘inequity’ fail at the very first attempt, he also fails to recognise the person who truly WAS the victim of ‘inequity’ – Ah Fook the Chinese traveller.

Fricke then goes on to describe Kellys other encounters with the law through this same distorted lens, making it his practise to minimise the criminality of Kellys behaviour and portraying him to be a victim of a system of ‘inequity’. He downplays the McCormick incident as a ‘run of the mill domestic dispute and behaviour in poor juvenile taste’ and criticises the sentence of six months as being excessive. He makes much of the fact that Ned Kelly was still in prison when the Mansfield postmasters horse was stolen, saying that once this was realised ‘the police were unfazed. They simply amended the charge to one of receiving.’ This phrasing is aimed at reinforcing the idea of ‘inequity’, conveying an impression that police just had it in for Kelly, and when the first charge couldn’t be made to stick they simply dreamed up another one. Fricke goes on to analyse the crime of ‘receiving’ and show in legalistic detail why in his view, Kelly shouldn’t have been convicted of it. Fricke thinks he has found another example of inequitable treatment of Ned Kelly!

However once again Fricke has let himself down by not being familiar with the ‘fine detail’, and arrives at a conclusion the facts don’t support. Ned Kelly was found in possession of a horse that had been reported stolen, and reasonably enough he was arrested and charged with stealing it. Subsequently police learned he couldn’t have stolen it, but they also learned something Fricke missed: in court James Murdock testified that Kellys intention was not ever to return the horse but to sell it, though of course Kelly well knew that it wasn’t his to sell. This resulted in his conviction, but it wasn’t for ‘receiving’ as Fricke wrongly reports, but for ‘feloniously receiving’ which is a more sinister crime than mere ‘receiving’. So once again Fricke’s incomplete grasp of the ‘fine detail’ has led him to an incomplete understanding of the entire picture and resulted in him constructing a flawed argument that Kellys trial was inadequate and that he had no case to answer.

Inevitably, Fricke’s account of the ‘Fitzpatrick’ incident contains all the usual lies that the Kellys and their supporters have attached to it over the years, almost every one of which has now been exposed. Fricke says Fitzpatrick’s visit was ’ostensibly’ for the purpose of arresting Dan, he says Fitzpatrick ‘didn’t bother’ to take warrants with him, that he went there ‘contrary’ to a police ‘directive’, that he had been ‘imbibing alcohol’, and that he ‘may have been more interested in seeing Neds fourteen-year-old sister Kate to whom, amongst other women, he was attracted’ (and Fricke’s footnote says Fitzpatrick was ‘quite a womaniser’). Every one of those assertions is false, though at the time he wrote his book they were all elements of the orthodox Kelly story, as presented by Fricke’s main sources Jones, Moloney et al. so I suppose Fricke can be excused for repeating them.

In his determination to support Kelly by finding ‘inequity’ everywhere, and undermine the policeman’s claim about his wrist injury, Fricke quotes a few words from the autopsy findings of Dr Nicholson: “it might have been produced by a bullet”. They seem to suggest Nicholson had doubts. However, every other statement of Nicholson’s about that wound show quite clearly he wasn’t sceptical at all: ‘it has every appearance of being one (a bullet wound)’ and ‘The wounds are consistent with Fitzpatrick’s statement’ and ‘either of the bullets produced by the mould taken from the Kelly house could have produced the wound’ – but all of them are ignored by Fricke.

I am not sure how Fricke would explain himself in regard to this misleading use of Nicholson’s words – did he deliberately ignore the ones that undermined his argument or was he simply ignorant of them? Either way it’s a terrible look.

Unsurprisingly, the obviously badly misinformed Fricke concludes that Ellen Kellys trial and conviction, presided over by Barry, was another example of ‘inequity’, because it was ‘based on the evidence of the shifty, devious Fitzpatrick’.The irony of course is that it was the Kellys and their friends whose testimonies were shifty and devious, being marked by frequent changes, internal inconsistencies and demonstrable lies. Fitzpatrick on the other hand gave one account and never changed any of it.

(Part Two to follow : Its already clear that Fricke has based his case on a very poor understanding of the ‘fine detail’ of the Kelly story. People who reviewed this book at the time were mostly legal types who were equally as uninformed, and so they recommended it. Fricke gave a talk about this book at the Beechworth Kelly Weekend in 2008, and took questions afterwards. I would guess, given his stance, that he was warmly received by the Kelly sympathiser mob who are now and probably were also then woefully uninformed of the ‘fine detail’.)