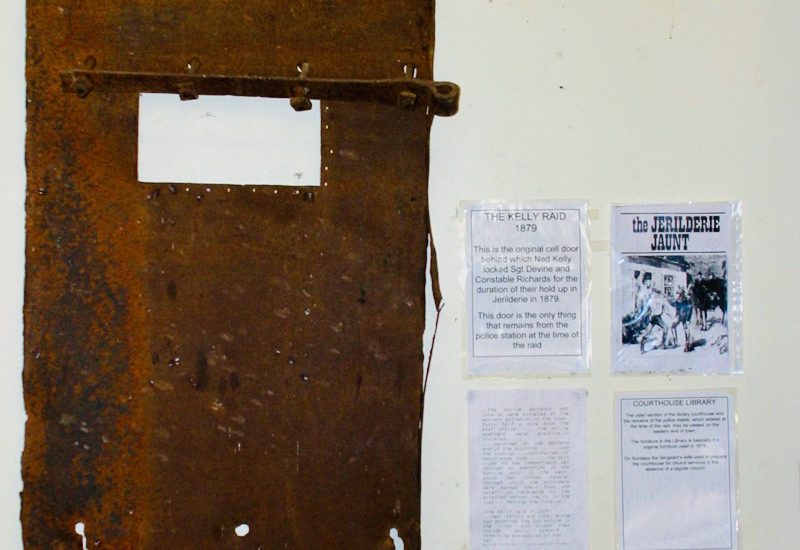 Barely two months after they robbed the bank at Euroa of over £2000, the Kelly Gang went north over the Murray river into NSW and on Monday February 10th 1879, robbed the Jerilderie branch of the Bank of NSW of a similar amount.

Once again, as at Euroa, instead of riding into town and conducting a surprise armed hold-up of the Bank and then galloping off into the sunset with their ill-gotten gains, instead, with a constant menacing stream of violent threats and the continual brandishing of rifles and loaded revolvers the robbery was converted into an elaborate and high-risk 2 day publicity stunt which began at the local police station late on Saturday night, February 8th.  That’s when the two unsuspecting local policemen were awoken by a man on horseback in the street outside the station and police residence, yelling at them about a drunken disturbance in the township. Once both unarmed Policemen, Devine and Richards had emerged, the man on the horse suddenly drew a revolver, announced he was Ned Kelly and marched them back inside. Mrs Devine was ordered to feed the Gang while her husband and Richards were locked up for the next 48 hours. The following day the Gang scoped out the town disguised in the policemen’s uniforms, and to avoid alerting anyone that something was amiss at the Police station Mrs Devine was escorted to the church to perform her weekly duty of arranging the flowers.

The next morning the gang robbed the Bank, taking Richards with them to ensure Mrs Devine behaved. The bank branch was in a converted assembly room of the Royal Mail Hotel, and Hotel patrons, passers-by and the Bank stuff were rounded up at gunpoint and imprisoned in one of the other rooms of the Pub. As before, Kelly dominated the entire proceedings, at times threatening violence, at others bullying the hostages and even other gang members, and at others turning on his manipulative charm which he had been using to great effect to control Mrs Devine.

Quite apart from the plan to steal from the Bank that morning, Kelly also wanted to deliver to local printer and newspaper editor Samuel Gill, a hand written 56 page letter he had brought with him that provided a counter narrative to the one in the papers that described him as a vulgar cut-throat ruffian.  He wanted to have a reputation like ‘Brave’ Ben Hall who was known and respected as the “Gentleman Bushranger” and whose feat of peacefully taking the entire town of Canowindra hostage for three days in 1863 was the inspiration for Kellys own hostage taking escapades.  Accordingly, as usual Ned Kelly subjected his captive audiences to prolonged lecturing about his grievances, but more importantly he was desperate to get the letter printed and distributed to all and sundry.

“In every paper, I am called the blackest and coldest blooded murderer ever on record. But if I hear any more of it I will not exactly show them what cold blooded murder is but wholesale and retail slaughter, something different to shooting three troopers in self-defence and robbing a bank”

This quote from the letter demonstrates how confused and mixed up he was, threatening violent slaughter against anyone who continued to describe him as a cold blooded murderer – his lack of insight borders on delusional.

Unfortunately for Kelly, Gills curiosity had been aroused by the site of extra police in the town, and thinking there might be a story in it for his paper, went to the Police station to ask Devine what was happening. Through a window, he saw a distressed child and a frightened Mrs Devine who cried out “Run. Your life is in danger” – which is what he did a short time later when at the Bank an unfamiliar voice called out “Just a minute” at the same time as Gill and two others heard the sound of a gun being cocked. Gill ran as Kelly emerged but the other two were rounded up at gunpoint, Kelly threatening to shoot one of them, so enraged was he that the only man in Jerilderie he really wanted to get hold of had just escaped: more craziness on display! Undeterred Kelly confronted Mrs Gill at her home demanding to know where the Editor was but she didn’t know: “Look here Mr Kelly” she bravely argued “if you shoot me I still won’t know where he is”.

Eventually the Banks accountant Edward Living promised Kelly that he would make sure Gill got the letter and published it.  “Mind that you keep your promise and see that they are printed or you will have to reckon with me next time we meet” says the armed bully Ned Kelly.

In addition to robbing the Bank and burning a pile of documents, the gang also smashed the telegraph equipment at the Post Office, chopped down several telegraph posts, stole the two guns from the bank, the policemen’s revolvers, two police rifles, Devine’s grey horse and various bits and pieces of  jewellery such as the Post Masters watch. A grieving mother later put advertisements in the paper pleading for Kelly to hand back a watch that he took from a safety deposit box that had belonged to her deceased daughter, but she never saw it again. Hart also stole Edward Livings saddle but when Living asked Kelly to get Hart to hand it back he ordered the chastened Hart to return it, no doubt because he thought it would be good for his image not only as a charitable gentleman bushranger but also as a tough gang leader who wasn’t afraid to publicly humiliate his own Gang members if they did things he didn’t like. Kelly then told Hart to go and steal a different saddle, exhibiting yet again how grand-standing narcissism rather than ethics governed Kellys behaviour – and of course Hart obeyed, taking the best one available from Mahood’s Saddlery at gunpoint.

Finally the gang left, Kelly promising that if anyone tried to repair the broken telegraph lines the Gang would return and shoot them ‘like bloody dogs’. As they left they shouted “Hurrah for the good old times of  Morgan and Ben Hall”. They gave the key to the lockup to the terror-stricken Mrs Devine telling her that if she let the prisoners out before 7.30 that evening her house would go up in flames.

‘One of the three, went to the door of the barracks and asked Mrs Devine. where the key was. She replied that she had it and inquired what he wanted it for. On receiving the reply that the key was wanted to let the prisoners out, she refused to hand it over, saying that she dare not liberate them before half past seven. The poor woman had not recovered from the terror of the outlaw’s threat.’ Jerilderie Herald and Urana Advertiser Nov 21st 1913.

From the Gangs perspective, the raid on Jerilderie was mostly a great success. It had certainly been an audacious crazy-brave escapade, demonstrating Ned Kellys brash foolhardiness, over-confidence and bravado. The only down side was that Kellys Letter didn’t get published until long after he was dead. At his trial the following year, the prosecution sought to introduce it as evidence but Kellys own counsel objected, so it wasn’t released publicly till 1930, and again in 1948 in Max Browns ‘Australian Son’, where it was first called the ‘Jerilderie Letter’.

The two Bank robberies yielded a haul of some £4000, which in todays money equates to almost a million dollars, a staggering bonanza that the Gang squandered in a few months paying off sympathisers and buying support and protection. Ned Kelly claimed he wanted the money to fund an appeal of his mothers conviction, but not one penny was used in that way.  Kelly was all talk!

There’s one other myth worth mentioning in relation to the raid on Jerilderie : its the claim made many years later by famed WW1 General Sir John Monash that when he was 12 he was in Jerilderie when the Gang raided the bank and he had a conversation with Ned Kelly, who gave him a shilling for looking after his horse. Certainly, Monash had connections with Jerilderie – his father ran a store there. Monash said meeting Kelly was one of the two proudest moments of his life, yet he told nobody about it until after the War and his various re-tellings of the story were inconsistent, suggesting he might have been telling tall stories!  More recently Monash’s whereabouts on February 10thhave been established : he was in Melbourne at school. The story of Monash and Kelly is pure myth!

One last thing : writers often describe this raid on Jerilderie as a triumph, as a great success because the Gang got the money but nobody was killed, as an exhibition of brilliant strategical planning, a demonstration of leadership qualities that indicate Ned Kelly would have been a great General, a display of imagination and bravery. I beg to differ.

In fact what he did was not so much brave as reckless and foolish showing off, because if only one hostage had decided to fight back it could have easily turned into another bloodbath like Stringybark Creek and who knows how many more innocent lives would have been lost. A sensible General would have devised a plan that exposed his men to the least risk, a surgical strike at the target, the Letter left behind and the Gang disappearing into the bush as quickly as they had emerged. Instead, to provide himself with an opportunity to posture and grandstand and promote himself Kelly risked the lives not just of his Gang but of many innocent men women and children in Jerilderie. The reason nobody was killed was nothing to do with Kelly being a great General and everything to do with the hostages having the great sense to do exactly as they were told. Everyone already knew Kelly was a ruthless multiple murderer, and they became witnesses to his volatile and unstable moods and impulses and the targets of his unending stream of violent threats and intimidation. Commendably, despite their terror, thank God, every single one of them held their nerve, and patiently waited till the maniac had everything he wanted and vanished back across the Murray. No doubt they would have all rejoiced just over a year later when he was finally captured and the Gang was destroyed, but for many the terror of that weekend would have left them like Mrs Devine, scarred and traumatised for the rest of their lives, forgotten victims of the Kelly Gang of murderers and thieves.