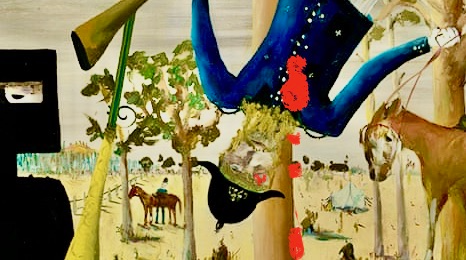 Part Two of Morrissey’s latest book focusses on the detail of the attack at Stringybark creek, and the immediate aftermath. The accounts of what happened provided by McIntyre and by Kelly himself are well known and are repeated along with interesting commentary about the facts which debunk the Kelly myths and conspiracy theories about the police being mercenaries on a mission to kill: not in disguise, no body straps, only one extra rifle, only six extra cartridges each, shooting at parrots, sending only half the party out to search on the first day – these facts undermine the myth that the Police knew where the Gang was holed up and were planning to kill them.

One of the enduring unresolved conundrums about the killings at SBC has been the fact that Kelly and McIntyre both reported that Lonigan was shot only once and yet at autopsy a few days later Dr Samuel Reynolds described four bullet wounds. How did they get there? Some said Lonigan must have accidentally shot himself in his haste to defend himself. Others suggested the Gang later fired into the corpse in some sort of bizarre bonding ritual. It was also suggested that a bullet had gone through his arm and then into his head.

Morrissey mentioned that he had been a consultant to ‘Genepool’, makers of the “Lawless” documentary which attempted to solve the puzzle by demonstrating that Lonigan’s wounds could have been caused by a quartered bullet, so I was expecting that Morrissey would explore this subject in detail, and hopefully describe the solution which has only recently been realised. The vital piece of the puzzle is an appreciation of the significance of Dr Reynolds finding at autopsy that all the wounds were inflicted while Lonigan was alive. Because we know he was only shot once while alive, all these wounds therefore had to have been created by that one shot, and the only way that could have happened was if Kellys gun was loaded not with an ordinary bullet but a quartered bullet or a load of some kind of shot, as was shown in the documentary. Several pieces of the quartered bullet – or shot, or swan-drops – hit Lonigan at once, creating the multiple wounds Reynolds found. Reynolds extracted one of these fragments from Lonigan’s left thigh and said it looked like a revolver bullet. But no revolver had been fired.

To my surprise, and disappointment Morrissey doesn’t mention this solution, instead nominating the one proposed by Ian Jones many years ago that the other wounds were caused during what Morrissey calls ‘the Kennedy/Scanlan fight’. The argument is that bullets fired back at the Gang missed their intended targets but somehow struck Lonigan’s corpse, lying on its back on the ground, not once but three times. Calling this the ‘Kennedy/Scanlan fight’ makes no sense because Scanlan didnt fire a single shot, but if Morrissey had calculated the odds of Kennedy missing who he was aiming at and accidentally hitting Lonigan three times he would have realised the virtual statistical impossibility of such an event. In any case we know this scenario is wrong because the type of wound Reynolds found was not the type seen when a corpse is hit by a bullet. The wounds were all of the kind found when the bullet hits a target that is alive.

Morrissey completely misses the vital significance of Dr Reynolds assessment that all four wounds were created before circulation had ceased, and dismisses it saying it was just an opinion and was ‘speculation’.  But Reynolds ‘opinion’ was not actually speculation at all – it was effectively an expert witness testimony that was based on the evidence of an autopsy finding that the wounds bore the characteristics of injuries caused by bullets fired into a living subject, and not of the distinctly different kind of injury found by shooting at a corpse. As Reynolds said, the difference between them is determined by the presence or absence of a circulation – which leads to bleeding and bruising in a live subject but not in a corpse. There can be no doubt: Lonigan was only shot once and all his wounds were inflicted simultaneously.

There are two critical insights that arise from this realisation about how Lonigan died. The first is that it conclusively establishes that what Kelly said about Lonigan’s death was a lie, and the second is that it conclusively establishes that what McIntyre said about Lonigan’s death was the truth. Four projectiles couldn’t have hit Lonigan at once in various parts of his body if as Kelly claimed, he shot Lonigan as he raised his head from behind the protection of a ‘battery of logs’. They could only have hit him at once in different parts of his body if they were all exposed at once, in other words when Lonigan was still out in the open, as McIntyre had said.

This realisation also puts to rest the claim promoted by Ian Jones and others that McIntyre perjured himself in denying Kellys account of Lonigan’s death. Jones claims that initially McIntyre gave Sadleir an account of Lonigan’s death that agreed with Kellys but every subsequent account he gave was changed to assert falsely that Lonigan was out in the open when killed, and thereby deny Kelly the chance to claim he killed in self-defence. Morrissey points out that Sadleir didn’t arrive at Mansfield until two days after the incident, by which time McIntyre had already provided his account, but also that Sadleir’s account, written when he was eighty years old, 30 years after the events ‘is riddled with major and minor errors’ some of which he lists. Simply put, McIntyre’s version is supported by the evidence but Kellys and Sadleir’s are not.

All these important opportunities to correct the record were missed by Morrissey because he didn’t think long and hard about Reynolds findings, the Genepool experiment and the odds of his own solution being the right one.

The final comment I want to make about content in this book relates to Morrissey’s claims about the murder site itself. He discusses the famous 1878 Burman photographs of the site and dismisses them, writing ‘The placement of the actors is incorrect’ and later ‘The Kennedy actor in the photograph with his hand raised should have been on the other side of the east-west log…’. It’s a pity that once again Morrissey didn’t think long and hard about what he was proposing about these important photos, because they contain a wealth of useful information, but the analysis has to be rational. What Morrissey describes as the ‘incorrect’ placement of actors was a result of the constraints placed on picture taking in the 1880s, where a small number of heavy photographic plates which had been carted laboriously into the bush had to be exposed judiciously. By moving the actors closer together an accurate approximation of the scene could be captured on a single plate. Morrissey’s suggestion that ‘Kennedy’ should have been on the opposite side of a log reveals his belief that the camera was pointing to the north and northeast, which is what Dr Adam Ford also claimed in the Lawless documentary. These two believe that Burman got it all wrong even though Monk had shown him exactly where the bodies were. Morrissey believes that despite knowing where the bodies were, and after taking all the trouble of trekking up to SBC with all his equipment, Burman then went and created a completely confused re-enactment for his picture. To me this makes no sense at all. Someone who was prepared to go to all that trouble to capture an historical site on film would surely take great care to make his photo as accurate as possible. I reject Morrisseys claims about the Burman photos : if Burman hadn’t cared about making it as accurate as he could, it would have  beeen a whole lot easier for him to have recreated the scene in any  suitable collection of trees just outside Mansfield.

I also reject Morrisseys claim on page 22 that ‘It is safe to say that after 140 years the mystery of the shingle hut location and therefore the police campsite has been solved.’ Here he is again referring to the outcome of the ‘Genepool’ documentary makers investigations, which included an archaeological exploration by Dr Adam Ford who announced in the documentary that the police campsite was in the vicinity of the public picnic ground. In fact this finding is disputed by at least three groups with an interest in locating the site, Fords investigation was faulty – as Ive shown HERE – and the so-called ‘Two Huts’ site remains the site that best fits all the available evidence. Morrissey could have usefully discussed all these sites but he has ignored them. In what the Kennedy Tree group would find troubling, he asserts that Monk wasn’t in the search party that found Kennedys body, so his identification of a tree that he told Burman was where Kennedys body was found was guesswork. Never-the-less Burman recreated the discovery there of Kennedys body and that photograph is the basis of the Kennedy Tree groups dubious claim to have rediscovered it. Maybe all they have discovered is the tree that Monk guessed might have been where Kennedy was killed?.

In summary, I would have to say this third and final book is the weakest one of the Trilogy, and could best be described as a missed opportunity. Instead of offering an updated analysis that incorporated the latest thinking about the various controversies about the murders at SBC, and pointing out what they imply for the popular  Kelly mythology, Morrissey has mostly just repeated ideas from last century, and not put much effort into doing more than the minimum, adding McIntyre’s memoir and an assembly of other bits and pieces to create quantity, rather than quality. For me this book was a disappointment, as it could have been a milestone in the ongoing replacement of Kelly myths and legends with historical truth-telling. Instead it contains few if any original insights, in some places Morrissey actually adds to Kelly mythology by presenting as historical his own unsupported interpretations of events and in other places he reinforces Kelly mythology rather than replaces it.

However, the book does still provide some of the missing detail about the lives of the police, arouses deep sympathy for the murder victims, and a sense of outrage at the Kelly gangs crimes. For those reasons at least, it remains a worthwhile read.