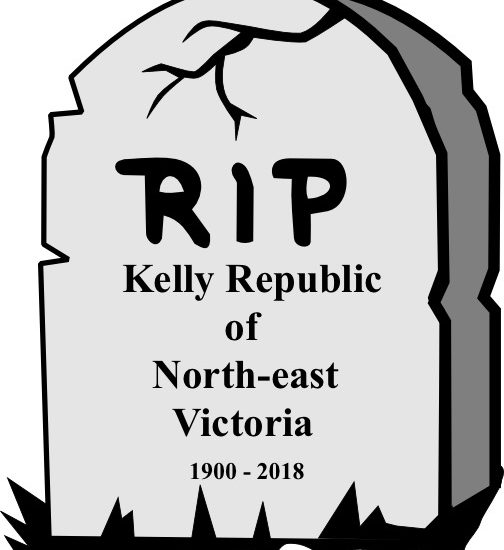 On the back cover of a recently published “Kelly” book, the reader is asked “Did you know that Ned Kelly was planning a republic of north-east Victoria?”
The suggestion that Ned Kelly was ‘planning a republic of north east Victoria’ has been examined and discussed several times on this blog, the first time being on Australia Day 2015 before the Blog was even a year old, and when I was still familiarizing myself with the detail of the Kelly story.  What I noticed back then, exploring the republic idea for the first time was that despite being famous for his voluminous writings and his incessant speech-making to hostages, to Magistrates, Judges, prison guards, doctors, friends and enemies alike, Ned Kelly himself never once uttered even one single word about a republic of north east Victoria, ever. Not one word! If he had, it would have been remembered. It’s a big idea.
But Ned Kelly wasn’t the only person who never said anything about a Kelly republic of north east Victoria. Every single other person involved in the Outbreak ALSO never said anything about a republic, not gang members, extended family members, friends and sympathisers, spies who infiltrated the gangs support network, magistrates, policemen, prison guards, Royal Commissioners, Commission witnssses, men, women, children….NOBODY, as far  as its humanly possible to know, not one person in the entire nineteenth century EVER said a single word to anyone about a Kelly republic of north east Victoria.Not one word!
But there’s more!
In 1929 JJKenneally, a noted Kelly sympathiser published his famous work ‘The Complete  Inner History of the Kelly Gang’. Its regarded as a landmark. Kenneally wrote in the introduction “The information necessary to enable me to write “The Inner History of the Kelly Gang’ was willingly supplied by members of the Kelly family and those relatives who were actively engaged in protecting their kith and kin from being betrayed for blood money by their enemies. The provedore (Tom Lloyd, first cousin of Ned Kelly) was the chief scout and confidential assistant to the Kellys and he was the only living person who was able to give me, in detail, their policy, programme and actual performances’
So here we have a claim to have been privy to the ‘inner history’ of the gang, to have been informed by the man widely regarded to have been effectively the fifth member of the Gang, and by the “Kelly family’ itself. Kenneally said he was provided with information ‘in detail’ about the gang’s policy and programme – and what did Kenneally learn about a republic of north east Victoria? Not one single thing. He called his book “The COMPLETE Inner history…” and it contained not one word about a republic of north east Victoria. Nothing! Not one word!
Ned Kellys brother Jim wrote to Kenneally and said “Through your book the people of Australia are in full possession of the truth” No mention of a republic.
James Ryan, a cousin of Ned Kelly also wrote to Mr Kenneally and he said “Your book is indeed complete”. Again, no mention of a republic.
Those long echoing decades of silence about a republic are a massive problem that modern Kelly  Republic supporters needed to have explained before anything else if they wanted the Kelly republic to be taken seriously. But they never have. What that fifty years of silence suggests  more than anything else is that the republic of north east Victoria is a modern-day invention. The only possible alternative explanation leaves the Kelly Republic on life support supplied by a giant conspiracy theory, an impossibly vast and perfectly impervious cone of silence.  No such thing has ever existed in human history.
The significance of the claims for a Kelly republic cannot be overstated – the republic has been made the absolutely essential core of the entire Outbreak, the justification and the inspiration for everything, and in particular the planned massacre at Glenrowan. The foremost of all Kelly authors, Ian Jones declared that “The Glenrowan campaign is inexplicable without the central carefully obscured fact of the republic”. At another place Jones described the Glenrowan Campaign as ‘madness’ unless it was part of a fight to establish some sort of new political order – he went so far as to say that if Glenrowan wasn’t ‘an act of war’, then it would be ‘simply mass murder’. And yet, if we are to believe proponents of the theory, at the time the establishment of a republic was being planned and carried out, nobody ever mentioned it to anyone . Not once. Ever!
Without the republic, Glenrowan was just madness, mass murder, and pure criminality, and Ned Kelly can no longer be promoted as a revolutionary hero making a stand against injustice but a wannabe mass police killer, a mere criminal. Those are the alternatives offered not by me but by Ian Jones himself. Without the republic, Jones said Glenrowan was just a mad plan for mass murder. So what was it really: a mad plan for mass murder or an attempt at a republic of north-east Victoria?
Well, I have ground-breaking news for everyone interested in the truth about the Kelly outbreak. This week, just in time for the Glenrowan Siege Memorial Dinner, and for the announcement yesterday of a new movie that will ‘show you everything’ about Glenrowan, the mystery of the republic of north east Victoria has been fully and finally resolved. This week, the results of the latest long awaited and much anticipated research on the Republic has been released by Stuart Dawson, the leading Kelly academic from Monash University. In brief, the republic is dead.

Dawson has already published the results of his enquiries into several other important Kelly controversies, the most important one being his work on the ‘Fitzpatrick incident’. He also examined the arguments about Kellys last words – they were not ‘such is life’ –  and he showed that the eye injury sustained by George Metcalf at Glenrowan was not caused by a police bullet but by one accidentally fired by Ned Kelly before the siege had even started.
Dawson’s latest publication is ‘Ned Kelly and the Myth of a Republic of North-Eastern Victoria”, and once again he has made it freely available as a PDF that can be downloaded HERE. This latest work however, is without doubt his most important, because it deals with the most important claim ever made about Kelly, what Ian Jones said was the “central…fact” about the siege at Glenrowan, that it was an attempt by Ned Kelly to establish a republic. If true, that would mean Kelly was some sort of political visionary, a leader and a martyred revolutionary hero. But if not, even Ian Jones concedes he must have been a mad criminal.
What Dawson has done is look in detail at every shred of evidence, every argument and every claim about the Republic that has ever been made.  This is not an argument based on cherry-picked evidence to suit a predetermined outcome but a thorough examination of every argument and every piece of evidence and every claim thats ever been made in support of the republic. It’s a remarkable achievement. There is not one claim or statement or mention by anyone relating to the republic that Dawson hasn’t looked at in microscopic detail. There is not one argument relating to the republic that Dawson hasn’t scrutinised deeply. He has traced the modern-day claims about a Kelly republic back to their roots, to their first ever mention. He has looked again at the claims about the conditions that were supposed to have been the cause of republican sentiment. He has looked at the claims about who the people were that were supposed to have supported this plan. He has looked at the claims there were secret meetings and records kept. He has looked at the claim that at Glenrowan there was a sympathiser army waiting to join the battle. He has looked at what arms they might have had. He has looked at the precise timeline of the events at the Glenrowan siege. He has looked at the famous claim that an actual Declaration was seen in a London museum. He has looked at the claim that this declaration was found in Ned Kellys shirt-pocket when he was captured. And more, much more. To say Dawson left no stone unturned would be an understatement. The stones haven’t just been turned over they’ve been weighed, measured, X-Rayed, photographed and catalogued, and the soil underneath them has been sieved.
The Bibliography lists 85 Kelly related publications, and there are 536 footnotes!
In the light of the exhaustive nature of his enquiry, Dawsons conclusions about the Kelly  republic of North-east Victoria are both devastating and inescapable. Dawson has confirmed once and for all that the Kelly republic is indeed a 20th century invention , an idea that was never in the mind of Kelly himself or anyone else in his world. It will now no longer be sensible for anyone to continue to promote the idea, include it in books or films, or postulate that Ned Kelly was a revolutionary hero. From now on it will be as sensible to claim that ‘Ned Kelly was planning a republic of north-east Victoria’ as it would be to claim, as was once asserted and believed to probably be true, that in the middle of Australia there is a vast inland sea inhabited by creatures as yet unknown. Nobody advances the arguments for an inland sea anymore because they have been disproven : now it’s the same with the kelly republic.
Given that the book has been made available for download for nothing, nobody who claims to be interested in the Kelly story has any excuse for not reading it. But be warned – though its only 65 pages long, the writing is so detailed and the arguments so condensed, its not a book that can be lightly skimmed over – it requires close and careful study.
There will of course be people whose beliefs are not founded on, or affected by facts, logic and reason, and to maintain their dogma about a Republic they will have to retreat into blind faith, and probably declarations based on their family tradition and handed down oral history. This is the quality of ‘evidence’ that’s given us several Steve Harts and Dan Kellys that survived the siege, impossibly huge numbers of peoples great-grandfathers who happened to be hanging around the Euroa Bank when the Kelly Gang robbed it, even the furphy that John Monash held the reins of Ned Kellys horse when he was robbing the bank at Jerilderie and was rewarded with a shilling. Anyone who wants to claim the low quality evidence of oral history as evidence for the republic will first have to explain why their great-grandfathers knew something about the Gang that J.J.Kenneally, Tom Lloyd, James Ryan and even Jim Kelly never knew. They won’t be able to do it. They will be left with bare, baseless assertion. And as we know, anything asserted without evidence can be dismissed without evidence.
From today, the Kelly story can no longer just be the same old Kelly story : Dawson has changed it radically and irrevocably. The Republic is dead – and according to Ian Jones this means Kellys Glenrowan was a mad plan for mass murder.  End of story.
(Visited 78 times)
Comments (66)

66 Replies to “ANNOUNCEMENT : The Kelly Republic is Dead.”