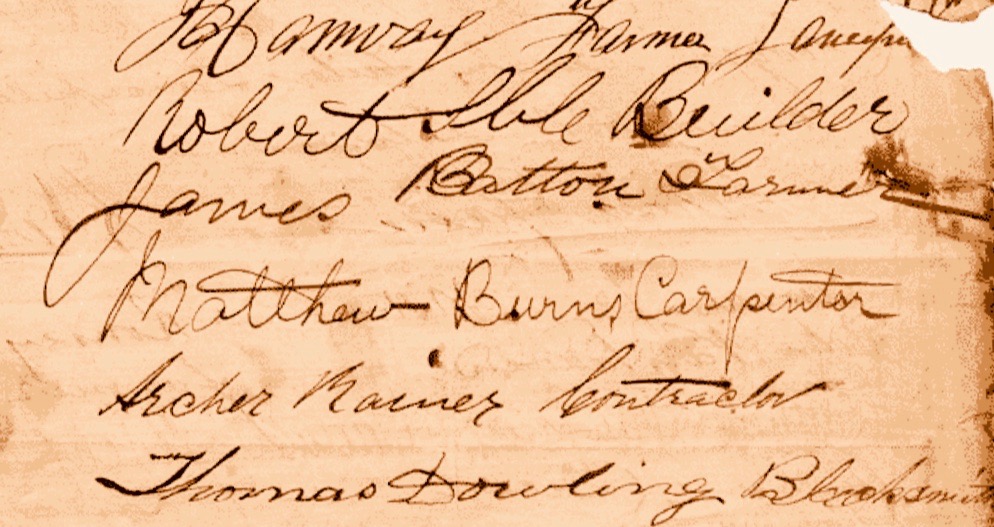 Two farmers , a builder, a carpenter a contractor and a blacksmith : six of the two hundred citizens of Lancefield who signed up in support of Constable Fitzpatrick and against the blackening of his name and reputation by police hierarchy determined to blame him for the Outbreak.

In the last few posts I’ve been discussing what we actually know about Constable Alex Fitzpatrick. We know that up to the time of the infamous ‘incident’ he had an unblemished record of service in the Victoria Police. We know that contrary to popular opinion, there is not one shred of evidence that he had a drinking problem or was an alcoholic. We also know, having seen Fitzpatrick’s death certificate that Justin Corfield’s Ned Kelly Encyclopaedia got it completely wrong, claiming he had alcoholic cirrhosis of the liver when he died. The death certificate recorded that he died from Liver sarcoma that was disseminated and had begun invading his stomach. Sarcoma of the liver is a completely different an unrelated disease to cirrhosis. Anyone who knows anything about the way malignancies spread in the abdomen will know that this dissemination is almost always accompanied by an accumulation of fluid called ascites, which was also recorded on the death certificate.
I’ve also written about the complaints that were made about Fitzpatrick’s conduct in 1879 and 1880 that led up to his dismissal from the police in late April 1880. As far as I have been able to discover, only two charges were proven against him – one for laughing in a hospital after ‘lights out’, and the other for missing the train in Sydney and arriving late for work. He was eventually dismissed from the force by Police Superintendent FC Standish on the advice of Senior Constable Mayes, who admitted to the Royal Commission that from the moment he began working with Fitzpatrick he was looking for an excuse to get rid of him.
This week I want to continue the discussion about Fitzpatrick’s dismissal and show that he was absolutely right to complain to the Royal Commission that he was harshly treated.
After the “incident” at the Kelly house in April 1878, Fitzpatrick was transferred to Beechworth and soon after, was sent to Richmond, in Melbourne, apparently for his own safety. However, because he knew what the Kellys looked like he was then sent to Sydney to keep watch on the docks in case the gang tried to escape by sea. This turned out to be a good move because he discovered that Jim Wilson, a violent convicted horse thief sentenced to five years in Darlinghurst Gaol, in Sydney, was none other than Ned Kellys brother Jim Kelly.

Last week I wrote that the charge of ‘neglect of duty’ that he pled guilty to, related to him ‘missing the train’. I thought this meant that he arrived late because he had not caught the train that brought him to work, but I’ve re-read those documents and realise I misinterpreted them. “Missing the train” referred to the fact that he was supposed to have been at the Station when the Southern Train arrived to he could scrutinise the passengers as they got off, and look for any members of the Kelly Gang who might have arrived on it. He arrived at 7.15 on the morning of April 30th1879, quarter of an hour late, missing the train that arrived at 7am and wrote, in explanation, that his own watch was at the Jewellers getting repaired and he was using a watch lent by the watchmaker which ran late. In the PROV file there’s a report from a detective who was sent to the Jeweller to check out Fitzpatrick’s story – and it did. Unsurprisingly the Jeweller said of the watch that he lent Fitzpatrick, that it was “considered a fair time keeper”.

There was also a complicated story that arose out of a complaint by a hair dresser in Sydney about Fitzpatrick and a woman he knew called Edith Graham (elsewhere named as Edith Jones), an employee of  Kazimany(?) Thomas Pogonowski, a hair dresser.  Pogonowski maintained that on the very same day that Fitzpatrick had ‘missed the train’, April 30th1879, Fitzpatrick engaged him in conversation in his shop to distract him, while Edith stole jewellery , ‘wearing apparel’ and money to the value of seventy pounds (£70). However when Senior Constable Edward Reatingye(?) interviewed Pogonowski he was told the value of the stolen goods was £50.  Edith later claimed that the jewellery had been given to her by Pogonowski “under the pretence of marrying” – which sounds suspiciously like a payment or an inducement for ‘services rendered’ by the servant girl to her employer. The report of the incident tendered by Fitzpatrick says that Inspector Rush told Pogonowski that ‘it was not the second or third time he had been troubled with him and the woman he keeps”. Fitzpatrick directed police to the place where Edith lived, he recovered the supposedly stolen items and in the end no charges were laid against anyone. However, as a result of this incident the police hierarchy decided to recall Fitzpatrick to Victoria. Reports were sent from Sydney to Standish in Benalla, and after reading them he wrote, on May 12th1879 :

“I concur with the inspector general’s opinion that it is no use in keeping Constable Fitzpatrick in Sydney any longer. He not only neglects his duty for which he was especially told off but he has evidently mixed himself up in a matter calculated to raise grave suspicions of his honesty. He is I fear a worthless and useless young man”
On May 25thStandish forwarded the reports he had received about Fitzpatrick to Superintendent C H Nicolson, along with a Memo which included an unwarranted mischaracterisation of everything that happened :
“It will be seen that Constable Fitzpatrick’s conduct has been most unsatisfactory while on special duty in Sydney.  He was on several occasions absent from duty at the Railway station where his services were urgently required and the attached file shows that he is in the habit of associating with persons from whom he should stand aloof. In short I fear he will never be a good constable.”
Standish goes on to write :
“The following entry will be made in his record that :
“Constable Fitzpatrick while on special duty in Sydney conducted himself in a most unsatisfactory manner; he was lazy, neglectful of his duty and associated with improper characters. In fact his whole conduct drew down the (indecipherable) of the inspector general of police and was calculated to bring discredit to the Victorian police”

But let’s be fair here: Fitzpatrick came to work late once – or possibly twice – and he was mixed up in a dispute between a dodgy employer and his employee, but neither he nor the alleged thief was ever charged let alone found to be guilty of anything. And that was it. On the positive side, the record shows he worked 12 to 14 hour days and he had very usefully identified Jim Kelly in disguise, but he received no credit for that. Standish claimed on the basis of the Edith Graham incident that he was ‘in the HABIT of associating with persons from whom he should stand aloof’ and for that, and perhaps twice being late for work his ‘ENTIRE conduct’ is branded as being ‘calculated to bring discredit to the Victorian police’. Where is the evidence that Fitzpatrick was in the HABIT of associating with the wrong sort of person, or that his ENTIRE conduct was unacceptable? These are gross misrepresentations.

It’s interesting to compare Fitzpatrick’s treatment by Standish with his treatment of another policeman the Kelly supporters love to hate: Constable Edward Hall. Hall was the one who tried to arrest Ned Kelly for horse stealing and when Ned was about to escape, drew his gun and pulled the trigger three times – but it misfired each time. Ned then attacked Hall but once he had been subdued, Hall bashed Ned’s head in with his revolver, and had to get a doctor to come from a nearby town to stitch up the mess he made. Later still, in Court, Hall lied about documentation that hadn’t actually been issued when he claimed to have seen it. So how did Standish respond to this obviously dishonest and violent policeman? He described him as ‘hasty and injudicious’and transferred him out of the district. Fitzpatrick, on the other hand for what, by comparison, were minor incidents was roundly condemned and kicked out. How can that be fair? 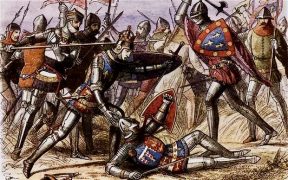 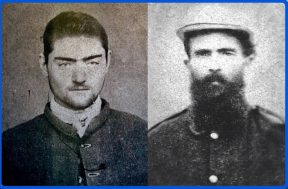