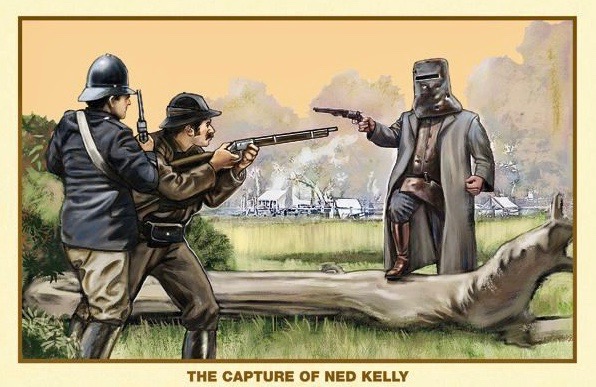 (This is a guest post contributed by Stuart Dawson, who recently set out to investigate and tackle an unresolved question in the Ned Kelly commentary. It is posted here to encourage feedback for correction and improvement. It is intended to be part of a future, longer research article on Ned Kelly’s Last Stand.)

Did Ian Jones’ admiration for Kelly lead him to wrongly accept a statement that Kelly’s last stand lasted over twice as long as it actually had? According to Jones, “The Last Stand had lasted for half an hour”, from Constable Arthur’s challenge to Kelly as he advanced in armour from the bush towards the Glenrowan Inn, and the first exchange of fire, to Kelly’s capture (Short Life, 2003: 236, cf. 231-6). Peter FitzSimons followed Jones, as have many others, in accepting a half hour timeframe, while noting that “the timetable … varies wildly in most contemporary accounts, with only broad agreement that from first shot to last it took around thirty minutes” (Ned Kelly,2015: 777 n.2). This is a red flag that the timeline needs review, especially given Daily Telegraph reporter George Allen’s contemporary estimate that “the whole affair” lasted “about a quarter of an hour, I suppose, or 20 minutes” (RC,Q.10774). Clearly the gunfight itself did not last half an hour; but how long was it?

The Age text of 29 June 1880 is partially damaged in Trove, but is reprinted in Hare’s “Last of the Bushrangers”, ch. XII. It says of 28 June, “The morning broke beautiful and clear. The police were disposed all round the hotel, when they were beset by a danger from the rear. … It was nearly eight o’clock when [Kelly’s] tall figure was seen close behind the line of police. … For half an hour this strange contest was carried on”. In a different place it gushed, “About seven o’clock Ned Kelly was seen in the timber, where he fought valiantly for about half an hour” (Age, 29 June 1880, 2). This is the source of the half hour gunfight generalisation beloved of Kelly enthusiasts. But the Age’s first (8am) starting time is an hour out. All sources agree that Kelly rose from the bush at dawn and began his advance toward the Glenrowan Inn and the scattered police line (Q.10043 Carrington; Q.10345 McWhirter). On that day, civil twilight (dawn) at Glenrowan was 6:59am (Geoscience Australia), and Kelly’s appearance and advance began “about 7am or after” (Q.8229 S/C Kelly).

Before the gunfight, one must allow for Kelly walking some 50 yards in armour, from 150 yards out (S/C Kelly, Argus, 29 June 1880, 6; Dowsett, Argus, 1 July 1880, 6) before being challenged about 100 yards out by Arthur, himself some 80 yards from the Inn(Argus, 2 July 1880, 7). [Both Jones p. 231 and FitzSimons p. 548 wrongly placed Arthur 100 yards from the Inn.] Upon that challenge Kelly raised his revolver. Arthur then fired, and Kelly returned fire (Q.11161); although he told the Argus at the time that Kelly fired first. Either way, the gunfight had commenced. Kelly called out, “fire away you b—s, you can’t kill me, I’m in armour”, and called to the outlaws in the Inn, “Come out boys, we’ll lick the lot” (Q.9450 Dwyer). Regardless that Dwyer’s watch was perhaps half an hour out (Q.9490), he noted what are here two key timing points: the time he was at the Inn stockyard just before he went up to the station, from which place he saw Kelly in the bush and heard him call out the above challenge (Q.9448-50), and then the time Kelly was captured (Q.9490), about 8 minutes later. Kelly’s last stand was not an epic half-hour gun battle; it was over in less than 10 minutes.

Kelly was captured before or around 7:15am, in the presence of reporters who had rushed up and witnessed his capture: “The outlaw howled like a wild beast brought to bay, and swore at the police” (Argus, 30 June 1880, 2). A few minutes passed with exchanges of words, Dwyer giving Kelly a kick, and Bracken defending Kelly from other injudicious treatment including possible summary shooting by Steele as his armour was removed (Q.10345 McWhirter). Kelly was then supported (“carried”) and walked some 100 yards to the railway station, including being lifted over a fence, while under fire from the Inn, and placed in the guard’s van (Q.8269-70 S/C Kelly; Q.10355 McWhirter). It was not until shortly after Kelly was lodged at the station that the sun rose (Q.9232 Steele; cf. Q.9234). On 28 June 1880, sunrise at Glenrowan was at 7:27am, so Kelly was in there at latest by 7:25am.

The Age’s “half an hour … contest” is a gross exaggeration of the gunfight timeframe, likely the result of excitement and nerves on the day. If it is to be taken as a marker of anything, it would encompass the entire time from Kelly’s first appearance from the scrub at 7am, through to his lodgement in the guard’s van at the station around 7:25am; but this is much more than the event known as the last stand. That, as the quote from FitzSimons above makes clear, is universally understood to mean the timeframe from first shot to the last at his capture. At most it might include some of his first walk in.

Allen’s estimate of a little more than 15 minutes for “the whole affair” was correct, within which the gunfight occupied less than 10 minutes. Only a few of the 34 police then present at Glenrowan, and railway guard Dowsett, were involved in the gunfight with and capture of Kelly. (The civilian Rawlins also assisted in securing Kelly, but was not involved in the gunfight, Q.11740-7.) The rest of the police stayed at their posts surrounding the Inn to prevent the other outlaws’ escape. Despite Jones’comprehensive reading of the evidence surrounding the last stand (SL, 2003: 405), he wrongly accepted the Age journalist’s exaggerated statement of the gunfight timeframe, over clear evidence that shows that Ned Kelly’s last stand was barely 10 minutes. Truth is duller than fiction.

(Dr. Stuart Dawson is an Adjunct Research Fellow in History at Monash University.)

5 Replies to “How Long Was Ned Kellys Last Stand?”