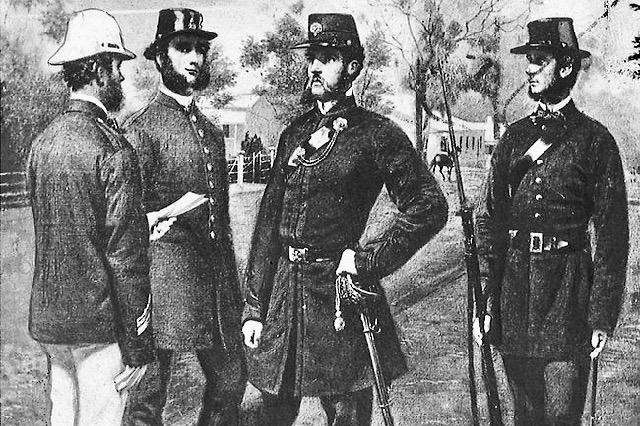 In the first part of this series of Posts about the contribution of Professor John McQuilton to the Kelly story I pointed out that in an ABC documentary about Ned Kelly, some of the important claims he made were wrong, and they helped support a false narrative about the role of police in the outbreak.

Last week, in the second part, I began an examination of chapter four of McQuiltons acclaimed book ‘The Kelly Outbreak’, wherein he develops an argument in support of the most important claim of the entire Kelly story, that the Kellys and their associates were victims of police harassment and persecution. I contend it’s the most important claim of the Kelly story because police harassment and persecution are alleged to be the provocation that resulted in and justified everything the Kelly gang did, the police murders, the bank robberies, the construction of armour, the murder of Aaron Sherrit and the failed attempt at mass police murder at Glenrowan. Without such provocation, the Outbreak is reduced to a bizarre chapter of lawlessness, and Ned Kelly to a murderous criminal. So, establishing the truth about the claim of police harassment and persecution is vital to discovering the truth about the outbreak and about the true nature of Ned Kelly.

In last weeks post I noted that the Royal Commission was set up to answer that very question, the first of its five terms of reference being “To inquire into the circumstances preceding and attending the Kelly outbreak.”  After interviewing more than 60 witnesses and asking over 18,000 questions the commissioners wrote in the Second Progress Report, under the heading “III : Causes of the Outbreak” that  “no evidence has been adduced to support the allegation that either the outlaws or their friends were subjected to persecution or unnecessary annoyance at the hands of the police.” The significance of this conclusion cannot be overstated : ruling out police harassment and persecution as a cause of the Outbreak effectively  destroys Ned Kellys claim that he was a ‘police made’ criminal, and exposes him as merely another criminal, albeit a uniquely inventive and colorful one.

What I find interesting – but I suppose it’s to be expected – is the fact that not just McQuilton, but all Kelly apologists have refused to accept this finding. Ian Jones rejected it with a dismissive wave of his hand, writing in ‘A Short Life’ that though the Commission’s report said they found no evidence of persecution  “the Commissions minutes would provide ample evidence to support it”. He then went on to discuss the police forces ‘dirty linen’ – which was nothing to do with claims of persecution – but didn’t bother to provide even one example of this ‘ample evidence’ of persecution he claimed could be found in the Commission’s report. This really is quite an astonishing arrogance – to make not even the slightest attempt to justify or explain his dismissal of such an important finding, a finding that refutes Ned Kellys  absolutely fundamental claim about the reasons for his behaviour, a vital central pillar of the whole outbreak, a finding that was the result of more than six intense months of scrutiny by a committee of nine distinguished figures. Jones’ simply refused to even consider the possibility that Kellys claim was just the claim of all crooks and con-artists, that the mess that was his life of crime was someone else’s fault.

Maybe Jones was relying on the argument for police persecution set out by John McQuilton, in chapter four of his book,  The Kelly Outbreak. There, he sets out quite a detailed case in support of Kellys claim, but  its a seriously flawed argument that ultimately fails, as I will show . The following is the first part of my analysis of McQuilton’s argument.

McQuilton traced the origins of the outbreak back to James Quinn(Snr) whose family came to the attention of police after fifteen years of what McQuilton calls “steady and apparently honest progress”. In 1856 a £50 reward was offered by a local squatter for the capture of a gang of local cattle duffers, and the police arrested James (Jimmy) Quinn, the youngest of James’ sons.

“The charge was cattle theft.  And the police failed to obtain a conviction.”(McQ p70)

To McQuilton this looked like police harassment.  It appeared against a background of apparently honest farming, there was a reward offered and the conviction failed – and that is the sum total of everything that we know about this case. And yet, even though McQuilton concedes that nothing of the record or the detail of this case has survived from that period, he quite confidently was able to recognise it as a landmark, and offers this remarkable analysis: “It is difficult to over-estimate the importance of this arrest because it established the major elements in the ensuing conflict between the clan and the police. The calibre of the force was at its lowest when the 16-year-old Quinn was arrested. The arrest had been prompted by a squatter’s reward. The charge was related to stock theft and it failed in court”

To further develop his case against the police McQuilton then claimed this was the period ‘when the police, accurately or not tied the Quinns to stock theft” and provides as a supporting reference the answer to question 3254 given by Police Inspector Montfort to the Commission of Enquiry. If you look it up this is what was said:

“That was the first time they were caught when I arrested them, and we were looking out for them a very long time. That was their first conviction to my knowledge. They were known to be cattle-stealing of course, but we could not get at them”.

According to McQuilton, this proves that the police had decided the clan was guilty of cattle stealing a long time before they had ever been arrested and charged, let alone convicted of it:

“They were known to be cattle-stealing of course, but we could not get at them”.

That certainly does sound like persecution, on the face of it. However, if you do  take the trouble to track down that reference, McQuilton’s argument breaks down completely, as Montfort’s answers to the next two questions make clear:

Yes, quite boys. Their mother kept a grog- shop on the Eleven-mile Creek.

The earliest time this comment could refer to is 1868, the year Ellen Kelly moved to Eleven Mile Creek, so Montforts testimony at the RC can’t possibly serve as evidence that there was a campaign of unwarranted harassment ten years earlier. He was referring to events in the late 60’s by which time several of the Clan had served time for stock theft and crimes of violence. Montfort wasn’t making unfair accusations at all,  which is what McQuilton wants us to believe, but was saying quite truthfully, on the basis of the known criminal records of clan members that ‘they were known to be cattle stealing’. McQuilton tried to make it sound like corrupt police speculation, police singling out the clan for persecution and harassment, but it was nothing of the sort.

This is again poor form by McQuilton, whose opening argument for the existence of Kelly clan harassment by police is based on a case about which no record has survived, and bolstered by an irrelevant misquote from the Royal Commission. His claim that the first arrest and discharge of Jimmy Quinn “established the major elements in the ensuing conflict between the clan and the police” is absurd over-reach. There is nothing in what is known of that case involving Jimmy Quinn that allows any such conclusion.

Next week I will discuss the next set of arguments McQuilton makes in his attempt to make the case for police harassment and persecution being a cause of the outbreak. Anyone with a copy of his book, The Kelly Outbreak can read it all in chapter four.

(Visited 180 times)
No comments yet