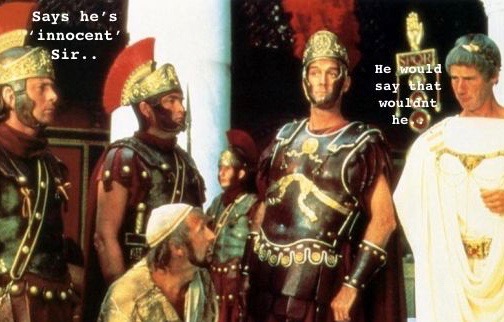 The argument that Ned Kelly should be remembered as an Australian hero and an icon, rather than as a thief and police murderer, is based on the idea that what he did was a principled stand taken in defence of his family against harassment and persecution by corrupt police. It was a theme he mentioned many times, but no more famously than in an interview given a few months before he was hanged, while in prison awaiting trial :

“If my lips teach the public that men are made mad by bad treatment, and if the police are taught they may not exasperate to madness men they persecute and ill-treat, my life will not be entirely thrown away”

The problem with that claim is that the police Royal Commission of enquiry into the causes of the Outbreak found no evidence of such persecution:

Except for John McQuilton, Kelly supporters have mostly just ignored this finding, but McQuilton attempted to show why it was wrong in chapter Four of his influential 1979 work The Kelly Outbreak.

In the last few Blog posts I’ve been analysing his argument and I believe demonstrated it to be fatally flawed, because his argument isn’t based on an analysis of actual cases, but on a kind of statistical analysis of a list which documents a conviction rate of 37% between 1860 and 1865. His argument is that such a conviction rate means either “incredible incompetence on the part of the police or an overzealous attention being paid to the wrong suspects”. However, as I pointed out it could also mean that the Courts were very lenient and compassionate toward young offenders, or, alternatively that suspects were acquitted unless the case against them was absolutely watertight. In fact, when I analysed one of the earliest cases for which a complete record exists, what I demonstrated was exactly that: the testimony of dubious defence witnesses was accepted, even though every one of them was an employee of the defendants father!

In reality the low conviction rate undermines the idea that the police were corrupt and motivated by Squatter reward money because if they were corrupt it shouldn’t have been hard to find a witness to ‘identify’ the offender, and so claim the reward money – but McQuiltons own statistics show that most of the time that didn’t happen. McQuiltons belief that a conviction rate can be used by itself to prove anything about police culture and practice is simply wrong. To prove police corruption and persecution you have to show it by reference to actual cases, and McQuilton doesn’t do that.

I also showed last week that McQuilton attempted to bolster his case for police persecution with a completely misleading reference to the testimony of Inspector Montfort to the Royal Commission. The evidence he used came from 1868, long after the Outbreak of criminality in the north-east had become firmly established. Later, McQuilton claimed that Nicolson’s famed containment policy, first enunciated in 1877, had something to do with the Quinns selling up and moving on from the Glenmore station in the King valley – but that happened in 1875! By then the Outbreak was already established, as McQuilton accepted “by the 1870’s many of the clan were definitely involved in regional stock theft…and pursued a more lawless life”.

Certainly, during the outbreak police behaviour was less than professional on occasion, unnecessarily violent and punitive on occasion, and mistakes and misjudgements were made. Many of these incidents were identified and responded to by the Commission who made many punitive recommendations. But these incidents and behaviours and policies should not be regarded as proofs of Ned Kellys claim that he was a police-made criminal. They relate to how he was treated once he was already a criminal, not to factors which caused him to become one.

Thats a debate for another day perhaps.

(Visited 76 times)
No comments yet