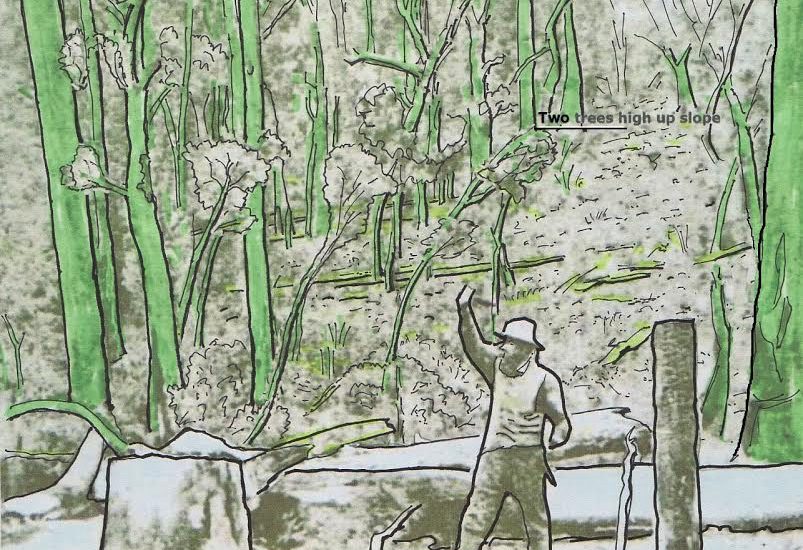 The Kennedy Tree Groups claim is that they have identified the site of the police murders at Stringybark Creek by finding trees in 2019 that can be seen at the site in the two published photographs of it taken in 1878. Their spokesperson Mr Jim Fogarty has stated repeatedly on their Facebook page that “If you take the time to visit the site, you will see that everything makes complete sense”.

But actually, it will only make sense if you have already accepted the KTG’s interpretation of the Burman photographs. So, if you accept their claim about a teapot tree and you find it, and if you go looking for the starburst tree 67meteres away from the teapot tree, and if you go looking for the forked tree and the double tree PC3 and you find them as well, it will all make complete sense to you – but only because that’s what the KTG have told you is found at the police campsite. You won’t be concerned that there isn’t a slope right behind where the police had their tent because the KTG have convinced you one was never there in the first place.

But if you aren’t so sure about their fragile arguments about the teapot tree, the starburst tree, the forked tree, the double tree and their claim about the slope, then going to their site at Stringybark Creek isn’t going to make any sense at all. The only place that will make sense to you is the place where you find what you believe you can see in the Burman photos, which is why I have been banging on about how important it is to determine, before anything else, exactly what is seen in the photographs. The big problem with the photographs though, is that they are not clear, and much of the detail is very poorly defined.

The argument about post-and-rail fencing is a case in point: everyone can see lines going this way and that, but, despite the insistence of the KTG that only their view is the right one, there’s actually no certainty about what they represent.  Some say they are images of a post-and-rail fence, others say they’re fallen saplings lying on a slope. But whatever they were, they have long since disappeared and no one can prove by looking at the photo whose interpretation is the right one.

I wrote the other day that the fence/sapling argument was a red herring because they are no longer there and there didn’t seem to be any way of resolving the dispute. However, remarkably, something has come to light in the last few days that radically changes all that, and solves the fences/sapling debate: it’s a description of the scene, in a report published within a few days of the murder, by an eyewitness who wrote the report for the Melbourne Herald of November 5th1878 and said quite specifically, that no fences were erected there: 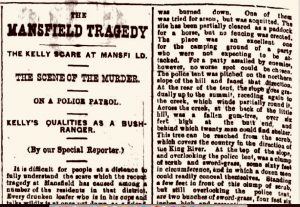 “THE SCENE OF THE MURDER”

This was a cleared space of about ten acres in extent on a gentle slope rising gradually and on the further side having a northerly and easterly aspect. The site until recently was occupied by a prospector’s hut. A small race has been cut along the side of the hill, and the Stringy Bark Creek, for some little distance up and down from this spot, has been prospected. About six months ago the party who occupied the hut fell out and it was burned down. One of them was tried for arson but was acquitted. The site has been partly cleared as a paddock for a horse but no fencing was erected.” (my underlining)

When I pointed this out to the KTG, to my astonishment they denied the obvious plain meaning of what was written in black and white in front of them, and claimed instead that the writer was only referring to the police campsite, and not the part of the clearing where they believed they could see fences. In fact, thats not what they said at all,  the word campsite was never used, and it’s very clear, reading the entire paragraph, that the eyewitness was at all times referring to the entire area of about ten acres of partly cleared ground that had been used as a paddock for a horse, by prospectors for a hut and by police for their camp. Given that in the photos the structures the KTG say are fences are easily seen, it’s clear the eyewitness would have easily been able to see them – but he saw none, and as we all have now read for ourselves he wrote ‘no fencing was erected’. That clear and unambiguous statement ought to settle the argument – but the KTG refuse to accept it.

The only way the KTG can continue to insist there are fences in the Burman photograph is by denying the plain and obvious meaning of the eyewitness’s report, and they’ve already made it clear that is what they intend to do. I don’t believe there’s any point in continuing to discuss their position on this because its irrational, and irrationality is immune to reason. Their claim about fences has been exposed by the eyewitness report as something more akin to an article of faith : no evidence will change it. So be it!

However, their determination to cling to their belief in fences comes about for quite a rational reason: their claim about fences is intimately wrapped up in their claim that the slope is an illusion. That’s because the alternative explanation to those features being fences, is that they are fallen saplings lying on a slope, and as the KTG has made very clear, they don’t believe there is a slope at the campsite. So, if the KTG give up fences, they have to accept there’s a slope, and if they accept a slope they have to abandon their claim to have found the true site, because there isn’t one at the place they’ve chosen.

So let’s review the arguments for a slope.

Essentially the argument for a slope is that a slope is what is seen in the Burman photographs. I published an attempt to make it obvious with green and yellow lines added to one one of the Burman photos, but at the top of the post is a much better version, prepared by Bill Denheld that makes it abundantly clear that the slope is no illusion. Here, I have placed it below an untouched version of the same photo so you can toggle back and forth and see whats being talked about: 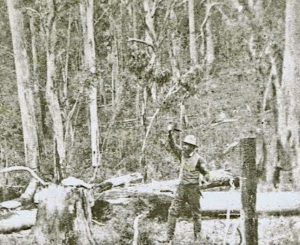 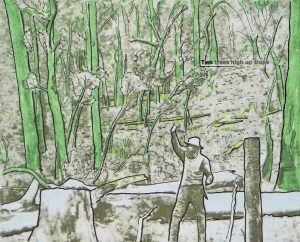 There have been arguments about what direction it lies in, and exactly how steep or how high the hill is, but there has been unanimity till now, that there’s a slope right there beside the Campsite. However, somewhat sensationally, the KTG announced in their Report that this slope is a photographic illusion, that it’s actually a large bush and behind it flat ground extends back some 70 meters or so to a minor slope in the far distance. They say that on that slope there is a tree they’ve called PC4, a tree they claim is still there today that they’ve called the Starburst tree, and behind it is a post and rail fence.  In Facebook discussions the KTG were adamant their interpretation of the photos was without doubt the right one: Jim Fogarty wrote “If there were any doubts we would not have released our reports”  It seemed as if it was going to become one of those issues, like the fences vs sapling argument, that came down to personal opinion about which explanation best fitted what was made of the images in the photographs.

“The police tent was pitched on the northern slope of the hill and faced that direction. At the rear of the tent, the slope goes gradually up to the summit”

As we all know from McIntyre’s description, the tent actually faced east, but after murdering the police the Kelly gang had burned it to the ground so the eye-witness guessed wrongly about which direction it was pointed in. However, he recorded the important facts that it was on the slope, and behind it the ground rose steadily ‘to the summit’. Nothing could be clearer: there was a slope, it wasn’t 70 meters away, the tent was on it, and the slope continued gradually from the rear of the tent to its summit. This is exactly what everyone has said for years that they could see in the Burman photographs.

The reality is this: the majority of people who have scrutinised those Burman photos over the years have not seen fences but a slope with saplings falling across it. And now we have an eye-witness report that confirms there was  indeed a slope, and that no fences were erected.

But what do those denials of the obvious do to their credibility? And if two central features of their claim to have discovered the police campsite – the fences and the slope – require acceptance  of an irrational argument, where does that leave their claim?

In tatters I would suggest.

76 Replies to “Who should we believe : the KTG or an Eyewitness?”