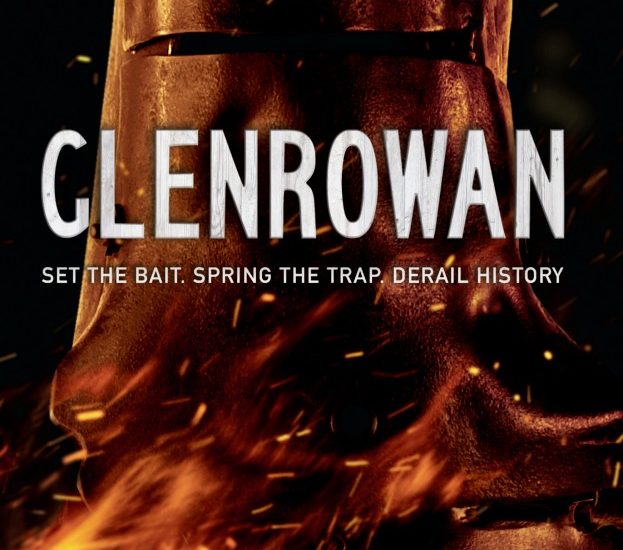 Self-published author Aidan Phelan says of his first work, the historical novel “Glenrowan” that it is ‘the story of how one man’s burning obsession can have far reaching consequences, and how a tiny town between towns became as iconic as Gettysburg or Waterloo’.

Actually, most Australians know almost nothing about Glenrowan, and anyone who did, and also knew something about Gettysburg or Waterloo would laugh at the comparison : Gettysburg was the place where an army wanting to defend the right of landowners to keep slaves was defeated by the army of Abraham Lincoln in a battle that cost tens of thousands of lives. Lincolns famed address was delivered there a few months later when a national military cemetery was dedicated to the memory of the dead. Glenrowan, on the other hand, was where the careers of a gang of four bank robbers and murderers came to an end.  It was certainly a dramatic and unprecedented event in the annals of colonial criminality but it wasn’t a turning point in colonial history or an event that’s celebrated nationally or remembered by anyone other than local tourist promotors and Kelly devotees of various colours. The idea that what happened at Glenrowan was in any way comparable to the momentous events at Gettysburg is absurd.

In fact, this historical novel was better than the impression created by the hyperbolic blurb suggested it was going to be.  Many Kelly devotees harbour thoughts of writing a book but very few manage it, no doubt at least in part because of the struggle that Phelan wrote about, the struggle to get such a work finished and then to get it published and distributed. It was clearly a massive effort and I congratulate Aidan Phelan on completing his first novel – its a significant achievement. Phelan is also a talented artist, and his illustrations are terrific – the one at the start of Chapter Nine ‘Besieged’ should become a classic!Oddly enough though, instead of making the case for Glenrowan being Australia’s Gettysburg, the story told in this novel fully affirms that this comparison was indeed badly misplaced. In his determination to portray ‘these historical figures as human beings with passions, beliefs faults and vices’ Phelan has rendered the central characters of the Kelly legend to be all too human. It surprises me therefore that Kelly sympathisers who claim to have read ‘Glenrowan’ are giving it the thumbs up, because Phelans story is not about heroism or a clear eyed visionary or a battle about noble ideals. The romantic legend of a band of brothers united by a common vision is replaced by a portrait of a conflicted, divided and desperate gang, squabbling and fighting amongst themselves, seeking escape in fornication, drugs and alcohol, lacking in vision and only united by fear and confusion. Their inconsistent and resentful submission to the whims and demands of an emotionally unpredictable Ned Kelly are unexplained. Phelans outbreak is devoid of anything like the central Kelly Republic myth, that modern Kelly sympathisers all cling to hopefully, I cant recall any reference to Irish causes or any other unifying goal, and Kelly is portrayed as unstable, confused and a bully.

So what was Kellys obsession?

“Ned stood and paced around the fire, “The comet – the visions – they were telling me that this is the path I must go down. The police are my natural enemies. They chose to bully and persecute those I care for. Now they’ll reap what they’ve sown”

So it would seem that Kellys obsession was the police and in getting revenge – in other words, what everyone believed was the case until Ian Jones came along! The vision, according to Phelans narrative was drug induced. And Halleys Comet that Ned saw streaking across the sky ? –  it was visible in 1833 and not again until 1908, not streaking across the sky but as a tiny smudge whose position changed slightly, night by night over several weeks. A minor detail.

Phelan seems to have taken great care to make his narrative as true to the historical record as possible, but he also seemed to want to include every known fact, with the result that the book is excessively long at around 170,000 words. In turn I think this led to a weighed-down over detailed narrative that often lacked pace and drama, often instead reading more like a script for a movie, with lists and detailed descriptions of what things looked like, what people were wearing and what they were doing. The descriptions of the siege itself, and much more were lacking not so much in the ‘what’ of events but in the ‘why’? Given that the Gang members were portrayed as so friendly with the hostages but so conflicted, so confused and so drunk I kept wondering what the hell was stopping the hostages from simply overpowering them or just walking out? The reality is there must have been an incredibly menacing climate of fear and intimidation at the Inn – but that isn’t something thats readily conveyed by facts and lists and detailed dry descriptions, or even by simply announcing that someone was in tears. Therein lies the novelists true art.

Because the narrative starts three quarters of the way through the outbreak – so the extensive criminal past of the Kellys can be conveniently ignored? – I think there needed to have been an attempt to explain the ‘why’ of the entire thing, of where Kellys vision that the police were his natural enemies came from, of why the need for such extreme revenge existed in the first place. Kelly devotees will have their own answers but would an uninitiated reader not wonder where all that obsessional hostility came from?  Actually, I felt the whole narrative lacked focus, by attempting to make it a story about everyone and everything that happened, even though it was supposed to be about one man’s obsession.

What this book needed more than anything else, I believe, was an Editor, but being self-published, Phelan had to be his own editor. An independent editor might have suggested making the book a lot shorter by being more intensely focused on Ned Kelly, might have spotted a few of the typos I saw, spotted the missing header on each page of chapter five, asked if Ned had really ‘interred the horse’ after riding it to the police stables (p185) and seriously questioned the need for so many explicit sex scenes. I am not sure why Phelan found a place in the book for almost every euphemism for ‘penis’, but if as his partner claimed when she also included x-rated material in her writing it was in order to portray things as they really are, I wonder why nobody was ever reported as farting or having a period or wiping their arse? The graphic sex mostly seems out of place.

Ironically, even though this books appeal will be mostly to Kelly devotees, the story it tells is not the one they will want to read. They want to read about a hero and visionary and a leader, the ‘unbeatified saint’ of Ian Jones fantasy. Instead what they get is a disturbed and disturbing story of a violent unpredictable human being with ‘passions, beliefs, faults and vices’. And I am not giving anything away by saying it doesn’t end well!

What seems odd to me is that if I suggest these things I am vilified by the Kelly mob, but if Phelan writes an entire novel about it, he isn’t. Perhaps its because when I say it readers know I believe it to be true, but when Phelan says it, sympathisers think its just fiction and can be ignored. But don’t they know he is trying to tell them this is what really happened? If everyone in Australia read this book and believed it, the legend would be over!