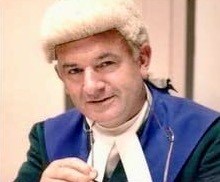 Anyone who has read Frickes book and part One of my review might be wondering why I completely ignored its first four chapters.  In those Chapters Fricke provides what he must have thought was relevant background detail, describing the origins of Melbourne itself, of Redmond Barrys early life in Ireland, the colonial milieu into which he inserted himself on his arrival in Melbourne in 1839, and his progress from working in a small claims tribunal to eventual acclaim as one of the fathers of Melbourne.

There are two reasons why I haven’t commented on all that: the first being that I found it to be superficial, disjointed and hard to follow, and the second being that it was almost impossible to see any relevance between most of it and the Kelly story. But one thing stands out:  Fricke’s bitter dislike of Barry is palpable.

However, as I am unfamiliar with the detail of Barry’s life and with the political intrigues and history of life in colonial Melbourne I decided to focus on Fricke’s approach to the Kelly story, something about which I am more familiar. And, as was noted in the first part of my review, I quickly discovered that Fricke’s knowledge of the ‘fine detail’ of Kelly’s story was abysmal. One then has to wonder how accurate was his understanding of the fine detail of Barrys’ – but not for long – because Stuart Dawson has dissected a lot of this material in comments added to the First part of my Review. Here also, in Dawsons estimation Fricke displays very indifferent scholarship. I am grateful to Stuart for taking the time to show why.

So lets continue to analyse Frickes case against Barry and in support of Kelly – which as Ive already shown is based on ignorance of much of the detail of the outbreak.

Typically, in his quest to minimise the criminality of Ned Kelly the shocking and brutal nature of the police murders by the Kelly gang at Stringybark Creek get hardly a mention, but the anti-police myths that the police were disguised as Gold miners and took leather body straps are both repeated, as is the idea that it was the police who drew arms and fired first, and that Lonigan was behind logs when he did so – claims now known to be false! The bank robberies, the callous murder of Aaron Sherritt and the momentous events of June 1880, when Kelly took hostages and attempted to murder a score of police by wrecking a train at Glenrowan- all this core narrative of the Kelly story is simply ignored.  Those events are presumably ‘minor details’ – or is it that it’s almost impossible to discuss them honestly without conceding Kellys plan was ‘monstrous criminality’ as Ian Jones said.

Instead, after a discussion about the inequities of the Outlawry act, Fricke begins a discussion about Kellys trial, writing grandly, and with incredible hyperbole “The stage had been set for a clash of cultures and philosophies”. In fact, it was a murder trial and nothing else.

In discussing the Trial, Fricke claims that Kelly could have pleaded self-defence, but didn’t, at least in part because the Defence was denied access to critical parts of McIntyre’s testimony. Instead the Defence was provided with what Fricke calls a ‘sanitized or laundered’ version of McIntyre’s statement about what happened when Lonigan was killed – and in Fricke’s eyes this was another example of the ‘inequity’ that Kelly was up against all his life.

This is an argument that Ian Jones made, was one recently alluded to on Facebook by a Wangaratta solicitor and Kelly apologist who claimed McIntyre changed his statement four times and wanted me to explain why, it’s been made by Jack Peterson on his error-ridden ‘Introduction to Ned Kelly’ Facebook page and it pops up in anti-Police posts on every pro-Kelly Facebook page quite regularly. Jones, the Wangaratta solicitor and Fricke  and all the rest of them, all think McIntyre’s account was changed to remove from it evidence that would have supported Kellys claim to have killed Lonigan in self-defence. They claim McIntyre was a liar, that he committed perjury , and they vilify him at every opportunity. By denying Kelly access to this account – according to the Kelly apologists – the Court was rigging the trial to make sure Kelly was convicted. Kellys claim was that Lonigan got behind a ‘battery of logs’ six or seven yards away and from there took aim at Kelly who then fired back in self-defence. Fricke’s and Kelly apologists approach to McIntyre’s testimony is effectively a conspiracy theory which is that if there are inconsistencies between accounts then they indicate something sinister, that the variations were ‘laundering’, that McIntyre was lying, that he was perjurer.

So let’s look at McIntyres statements:

McIntyre’s first statement, made the day after the murders included this:

“Suddenly and without us being aware of their approach four men with rifles presented at us called upon us to ‘bail up, hold up your hands’. I being disarmed at the time did so. Constable Lonigan made a motion to draw his revolver which he was carrying. Immediately he did so he was shot by Edward Kelly and I believe died immediately”

However, the Statement provided to the Defence, made the day after the first one says “I held out my hands to show I was disarmed and as I did so I saw the man on the right of the party move his rifle from the line of my chest and shoot Lonigan who had no time to get under cover or draw his revolver”

Fricke says of the first statement that ‘it differs from subsequent statements in an important respect, which bears on the viability of a case of self-defence: it has Lonigan at least reaching for his gun, which supports Kellys frequent assertions that he was simply defending himself when he shot Lonigan’ Later, Fricke writes of McIntyre’s first statement that it “ was more likely to contain the truth than any of the sanitized versions (but it) never saw the light of day” and the result, according to Fricke was ‘trial by ambush’

To boost their case, the Kelly apologists also like to quote a third statement McIntyre was reported to have made to Sadlier the day after his second one: “Lonigan… put his hands to his revolver at the same time slipping down for cover behind the log on which he had been sitting. Lonigan had his head above the level of the log and was about to use his revolver when he was shot through the head” Ian Jones wrote about this account that it was the ‘one occasion he (McIntyre) confirms Ned Kellys account’. This is the statement that Kelly apologists insist demonstrate that McIntyre perjured himself at the trial, because at the trial he made no mention of Lonigan aiming at Kelly from behind a log. The apologists say he deliberately concealed this fact so that Kelly would be denied the defence of self-defence.

On the face of it, this last account and the earlier two are difficult to reconcile – but a conspiracy theory isn’t needed to understand them. The facts are these: the first two statements were made and recorded at the time by McIntyre, but the third version wasn’t a statement made by McIntyre at all. It was a claim made by Sadleir when he wrote his memoir a whopping 35 years later, a recollection of what he thinks McIntyre told him all those years before. It wasn’t a claim ever made by McIntyre, and it certainly wasn’t in existence at the time of the trial.

So, if Sadleir’s account contains inconsistencies with those of McIntyre that were made and recorded at the time of the incident, whose statement is more likely to be correct ? – the one made and recorded within a day or two of the event by the person who was there at the time, or another written down from memory 35 years later by someone who wasn’t there? Its a no brainer!

But if common sense and logic are insufficiently persuasive against this stupid conspiracy theory, proof that it was Kelly who was lying and not McIntyre is provided by the forensic facts in the form of a bullet wound on Lonigan’s left thigh. It proves Lonigan wasn’t sheltered behind a log when shot, as Kelly claimed but out in the open, as McIntyre accurately recorded. These facts make the idea of a defence based on self-defence laughable and Fricke’s arguments about it redundant. If it was ever advanced in a real trial or even a properly conducted re-enactment it would fail.

There’s more to this book that could be taken down – but what’s the point? Its a very badly written unbalanced and inaccurate rant from a County Court Judge who seemed to have it in for Sir Redmond Barry, and was one of the many who was yet another of the throng of modern Kelly supporters who were mesmerised by Ian Jones and his great tall story about a seductive criminal. This book is very outdated and contributes nothing but confusion and disinformation about the Kelly story. Frickes argument about ‘inequity’ fails completely, and he never manages to convince that this was a clash of titans, that the criminal Kelly was in some way a match for the Judge. It was just a murder trial, and Kelly got his just reward for the murder of Lonigan.

HERE is a link to a discussion about his book and about Barry between Fricke and  ABC Melbourne’s Jon Faine from 2007. Frickes antagonism towards Barry is evident right from the very start when at the first opportunity he describes him as a hypocrite.The Interview with Fricke starts at the 31minute 20 second mark.