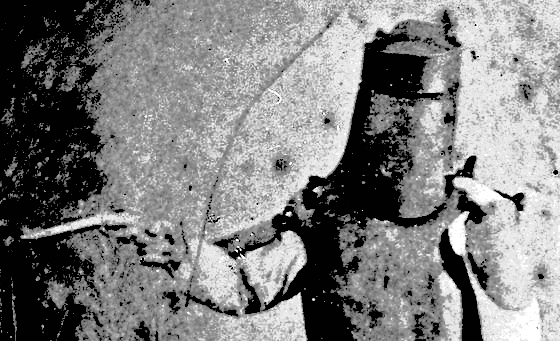 In Part X of this series I described how the Kelly Outbreak came to an end at Glenrowan on the weekend of June 26th1880: the Kelly gang engineered but  completely botched a hostage crisis that began in the Woolshed valley with their murder of Aaron Sherritt. It ended disastrously at Glenrowan with the death of three of the four members of the Kelly gang, the death of two of the Kelly gang’s innocent hostages, the capture of Ned Kelly and the destruction of Ann Jones Inn which was burned to the ground. It was a dramatic and violent confrontation that left scores of people traumatised, the colony and the world aghast, and everyone asking why?  The Kelly Gang had obviously been preparing for this confrontation for months but what exactly had they been hoping to achieve?

For answers, the obvious sources are the words of the gang leader, Ned Kelly. Clearly, he was planning to wreck the train and to kill police: he told James Reardon, one of the platelayers he forced at gunpoint to lift the railway line, that he was doing it because he was expecting a train from Benalla “with a lot of police and blackfellas’ and “I’m going to kill all them buggers”. But was killing police in a train wreck the sole objective?

Before the siege, gang members kept quiet about what was planned for obvious reasons, but afterwards as three of them were killed, only Kelly was left to talk about it, and what he DID say was short on detail. From his prison cell in the OMG Ned Kelly wrote  that the attack was initially developed as an attempt to free his mother and two others by taking senior police as hostages:

“This was my first intention, so as to capture the leaders of the police and take them into the bush and allow the superintendent to write to the head department and inform them if they sent any more Police after me or try to rescue him, I would shoot him, and that I intended to keep them prisoners till the release of my mother, Skillion and Williamson”

Think about this for a minute: does it make any sense whatsoever that in order to spare his mother the few months that remained of her sentence, Kelly would devise a plan for the mass killing of perhaps two dozen police in a train wreck?  How would any person in their right mind think mass killing and the taking of hostages was anywhere near reasonable and proportionate, quite apart from the likelihood that it would fail?  Any sane person would see it immediately as a gross, hyper-violent and repellent over-reaction. But there was more to it than that.

Kelly then wrote “But subsequently I varied my plans”. He doesn’t explain why he changed the plan, but declared that the new plan wouldn’t be about taking police hostage and negotiating the release of his mother and friends from gaol, but commandeering the train and using it go back down the line and rob banks:

“It was my intention then to take possession of the train, horses and everything and return along the line, leaving the police surrounding the barracks and Glenrowan, while I had the train and robbed the bank along the line”

Five days later, on November 10th he wrote his last letter, and returned to his plans for Glenrowan, restating them this time in a somewhat vague plan involving both hostage taking and bank robbing. He also rather ridiculously declared that the purpose of the armour was to make it unnecessary for him to kill anyone, because inside the armour he himself would be safe:

“The next thing I wish to mention is the Crown Prosecutor’s trying to point out my blood thirstiness in wearing steel armour. This is quite contrary, for without armour I could never have possibly robbed a guarded bank and disarmed Police without taking life, but with armour I had not occasion for taking life. I can solemnly swear now before God and man that it never was my intention to take life, and even at Glenrowan I was determined to capture Superintendent Hare, O’Connor and the blacks, for the purpose of exchange of prisoners. While I had them as hostages I would be safe. No police would follow me. And in lieu of taking them, I thought it might be as well to leave them surrounding their Police Barracks at Glenrowan and get possession of their train and horses without an encounter…”

He went on to make several other ridiculous claims  – such as that it was his idea that Curnow should go and stop the train so he could claim the reward! As for declaring that the purpose of the armour was to make it unnecessary to kill – this is the man who declared in the Jerilderie Letter that the consequence of defying him would be ‘a speedy dispatch to Kingdom Come’, and elsewhere warned that “If I hear any more of it I will not exactly show them what cold blooded murder is but wholesale and retail slaughter, something different to shooting three troopers in self-defence”.  This was the man who chased a fleeing policeman a half mile or more through the bush at Stringybark creek, wounded him, caught up to him and executed him on the spot. This was the man who ordered the tracks to be lifted at Glenrowan and told Reardon that when the train crashed he was going to ‘kill all them buggers’. The obvious lies and transparently silly attempts made by Kelly in these last desperate letters to completely re-write recent history make it hard to be certain if anything written in them should be taken at face value. They raise serious questions about his mental health.

However, these are the only direct statements he ever made about what he planned to do at Glenrowan, and why. They are stupidly optimistic, vague, unrealistic and bound to fail, with no apparent exit strategy or longer term vision for what would happen once Mrs Kelly was set free, or what move would follow the robbing of banks in armour. However, they quite clearly and consistently centre around the themes of mass murder, hostage taking, freeing his mother and robbing banks. These plans are quite mad, obviously, but like it or not those mad plans were what Glenrowan was all about and nearly fifty years later the only surviving member of the Gang, the so-called fifth member Tom Lloyd told J.J.Kenneally the same thing . Kenneally wrote (p136):

“The plan was to capture the leaders and hold Spt Hare and other leaders such as the blacktrackers, as prisoners of war and then request an exchange of prisoners. The Kellys would give up Hare and O’Connor upon the release of Mrs Kelly, Mr Skillion and Williamson…The alternative plan was to bail up everybody who happened to be in Glenrowan on Sunday and get the train stopped about a mile on the Benalla side of Glenrowan….and compel the engine driver to take the train back to Benalla and take the Kellys down the line to rob the banks. The police surrounding the barracks would be fairly stranded while the Kellys successfully carried out their plans”

Until Ian Jones came along in the 1960’s, those were the plans that everyone accepted as being the Kelly Gangs motivation for the Glenrowan attack. When he looked at those plans for Glenrowan Ian Jones saw a ‘criminal monstrosity’  and along with almost everyone else recognised them as ‘madness’. The Kelly Gang weren’t regarded as heroes but as ultra-violent criminals, though some admired Kellys foolish courage and found his mad inventiveness amusing.The iron mask became a symbol of all this dark rebelliousness and disregard for the law.

However, Ian Jones was one of the people, like Max Brown, who simply couldn’t accept that Ned Kelly was actually just a crazy person. Jones wanted to see something heroic in Ned Kelly, he came to believe most of the lies that Kelly told about himself and his family being oppressed and persecuted, and so invented a new explanation for the Glenrowan campaign. He called it his  “New View”, and it was designed to elevate the image of Kelly from crazy person to heroic political visionary. Jones ‘new view’, set out at a Kelly symposium at Wangaratta in 1967 and recorded in ‘Ned Kelly Man and Myth’ was that the confrontation at Glenrowan was an attempt to overthrow local government and declare North east Victoria an independent republic.  Never mind that for more than fifty years after the Siege neither Kelly nor any member of his family or any sympathiser, informer, or police spy ever mentioned it, and even in his long speech after being sentenced to hang Kelly never mentioned any such thing : Jones was so convinced that Kelly couldn’t have been mad that he developed a conspiracy theory as good as any, directly claiming that the absence of any evidence to support the idea was proof it was real : it was such a well-kept secret that nobody ever mentioned it to anyone, ever. I am not making this up : Jones made that exact claim in his Kelly biography A Short Life: “One police agent broke the inner circle of sympathisers and head about the armour being made but failed to learn of the republic”

Though many were unconvinced, he was such a charismatic, persuasive and influential advocate for Kelly and the republic of NE Victoria that Ian Jones theory rapidly became incorporated into the Kelly legend, and went unchallenged for the next fifty years. However, when it finally was examined in forensic detail by Stuart Dawson in 2017, (Download his paper from the link at top right of this page) it fell apart, and with Jones no longer here, nobody, not even Kelly sympathisers are prepared to defend it.  In the 2020 publication ‘Glenrowan’ written by an avowed Kelly fan, there’s no mention of it.

So what’s left is what Jones himself realised at the very beginning: a criminal monstrosity,  with nothing to redeem it any way. Even if it was a plan to rescue his mother it was a stupid and shockingly violent and callous plan. However, Kelly devotees such as the hundreds of members of various Facebook Kelly support pages continue to venerate the man and his story as if Jones view is still tenable – but it’s not; it’s been debunked.  What Kelly planned for Glenrowan exposes him for all but the wilfully blind to see as a callous hyper-violent extremist and the fact that he was brought down before he could complete what he started at Glenrowan doesn’t lessen his culpability or the condemnation he deserves in the least.

Heres my question for people who think Kelly was a hero ( and I will be shocked if any one of you pathetic denialists has the courage to answer) : Now that you can no longer hide behind the myth of the republic as an excuse for doing what he did, if Kelly had been successful at Glenrowan, the train had crashed and the Gang had murdered any of the two dozen people on board who had survived, would you still regard Kelly as  Aussie Icon hero and role model?

God help anybody who would say yes to that question..

12 Replies to “The Actual True Story of Ned Kelly : XI : What was Glenrowan supposed to achieve?”