The episode in Ned Kellys life where Constable Lonigan  grabbed him by the “Privates” – the “crown jewels” is what Peter Fitzsimons calls them –   is  one of those events that is recounted and retold to demonstrate yet again what nasty brutes the Police were. This practice, according to Ian Jones  is an “old English Police tactic” called Blackballing, and was used to subdue violent prisoners. In his Kelly biography “A Short Life” Ian Jones recounts this event almost in passing, giving it little more than a page, but in his Kelly book, Peter Fitzsimons goes to great and colourful lengths to describe the events leading up to the fight, the fight itself, and its aftermath both in Court and on Neds manhood.
Also known as the “squirrel grip” (as in  ‘grabbing a handful of nuts’) – it is a tactic that when used in a fight these days is regarded as somewhat “below the belt” and is frowned upon as dirty fighting. It probably was then too, but if Jones belief that it was a known Police Tactic at the time, used to subdue violent prisoners, and if Fitzsimons description of the fight in which it was used is anywhere near accurate then the “Squirrel grip” was probably used appropriately, even if it was “dirty”.
What I will show here is that  if you think about it carefully instead of simply swallowing the pro-Kelly propaganda about it, this event demonstrates not something shocking about Police behavior, but about Neds behavior. Unfortunately, like so much of Ned Kellys behavior nobody seems to have taken a critical look at it and asked the question “Is this really the sort of behavior to be expected from someone promoted as a national Icon and Role Model, as Australia’s Robin Hood?”

This is what happened: Ned was in a pub drinking with a Policeman who later in the day arrested him for riding his horse while drunk across a footpath.  Later Ned Kelly blamed his drunken behavior on the policeman who, he claimed, had “spiked” his drink.  The arrest and the night in a Police Cell were uneventful, but in the morning he had to be taken up the road to the Police Court, and it was decided he should be in handcuffs. For some reason Ned took great exception to this plan and a fight ensued. Ned managed to escape from the Station and was chased up the street but was eventually caught when he ran into a shop that had no back door exit. 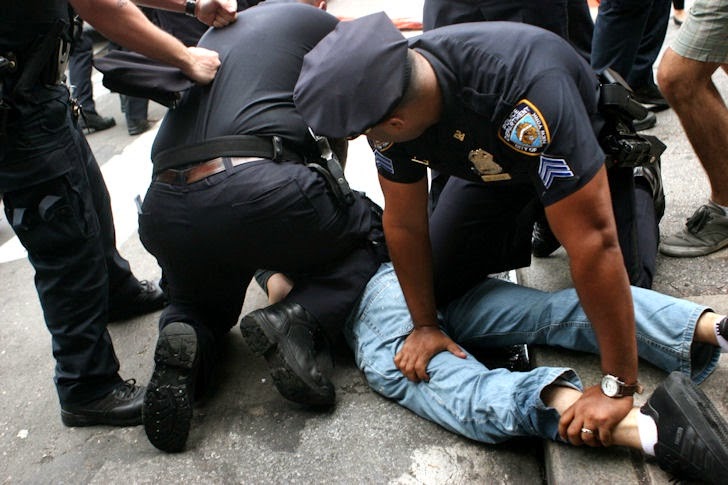 Four Policemen, including Constable Lonigan who applied the squirrel grip, and the shopkeeper struggled to subdue him and to handcuff him, but in the end when a JP came in he managed to get Ned to settle down and accept the handcuffs. Subsequently, according to Ian Jones Ned Kelly “cheerfully” admitted to the charge of assaulting Police in the execution of their duty and for resisting arrest and was convicted and fined 4 Pounds five shillings for those offences, and a mere ONE shilling for the original offence of being being drunk and disorderly.
Both  Jones and Fitzsimons regard  Kelly’s punishment as surprisingly lenient, and as Jones puts it , after paying the fine immediately “he walked from the court convicted of a “paltry” crime but with his “flashness” undiminished and his local “prestige” greater than ever. In his own recollection of the fight, Kelly proudly boasted how “with one well directed blow I sent him (Fitzpatrick) sprawling against the wall” and later “I allowed this man (the JP, William Maginness) to put the handcuffs on me though I refused to submit to the Police”
These events happened in late 1877, when Ned Kelly was 22, a mature adult, but this behavior couldn’t possibly be described as mature.  What kind of person “cheerfully” admits to assaulting Police, and brags about what trauma he has been able to inflict on them as they attempted to perform their legal duty? What kind of person would rather engage Police in an all out brawl than simply accept handcuffing and go quietly to Court for the minor offence of being drunk and disorderly, an offence which ultimately attracted a fine of a mere one shilling?  What kind of person  would get satisfaction from wasting a couple of weeks wages on Court fines when he has a poverty stricken family supposed to be relying on him for support?
In fact they were the actions of a show-off whose main concern seemed to be his reputation among his peers for whom “flashness” was the gauge by which your place in the social hierarchy was judged. “Flashness”  is not a term we use these days but then it referred to the manner in which you acted out an informal code relating to dress, attitudes to authority and social behavior that set you apart from the ordinary law-abiding folk of the regions villages and towns. “Flashness” entailed an arrogant disregard and even disrespect for traditional mores and laws and was clearly something that was important to Ned Kelly. Being seen in handcuffs would not have enhanced his “flashness”, but brawling with five men, sending one “flying” and not giving in even to the “Squirrel Grip” would certainly enhane it and increase his prestige among his peers, as Ian Jones noted.
But as this episode shows, when examined carefully, Ned Kellys flashness disguised  an arrogant, cunning and manipulative bully and thug, a person lacking self control and who, being aware of his superior strength and brawling ability  took some pleasure in creating a violent scene on the main street with him in the centre of it.  This episode became an opportunity to enhance his “flashness” among the networks that he moved in, of people like him who had an enduring resentment toward the Police and authority in general. The truth is probably that he was actually losing the fight with the policemen but by allowing Maginess to put the cuffs on him he cleverly avoided humiliation at their hands and instead managed to embarrass the Police and claim victory for himself. Ned Kellys undoubted physical prowess was complemented by his cunning.
Another demonstration of Ned Kellys immaturity was his refusal to accept  responsibility for drinking more than he should have. He denied that he drank too much and instead blamed the Police for “spiking” his drink.
“yeah, right” is the response he would get these days to that yarn!
But this immature inclination to deny personal responsibility for his actions,  is something that Kelly often did :  the fight only happened because they tried to handcuff him, He was not there when Fitzpatrick was shot at; nobody told him that Wild Wrights horse was stolen; in the confrontation he engineered with police, it was the Polices fault when people he had abducted and imprisoned in Ann Jones Inn were killed and injured; the incident with the calf testicles was nothing to do with him – he was just the messenger; the reason he punched McCormick  was because the horse “jumped forward and my fist came in collision with his nose”; Policemen were killed at Stringybark Creek in “self defence” , or in other words it was THEIR fault they were killed – and so on.
Clearly though back then this mans behavior appealed to certain sections of society, and indeed there are sections of modern society to whom it still appeals. I am hoping that for most, this appeal is based on an ignorance of what he was really like, because there is precious little critical analysis of his behavior and character. Thinking about this incident and its display of Ned Kellys “flashiness”, his arrogance and immaturity and blame shifting and bullying , the answer to my original question is obvious, but I ask again “Is this really the sort of behavior to be expected from someone promoted as a national Icon and Role Model, as Australia’s Robin Hood?”
No doubt, as usual, there will be silence from the pro-kelly mob.
(Visited 28 times)
No comments yet