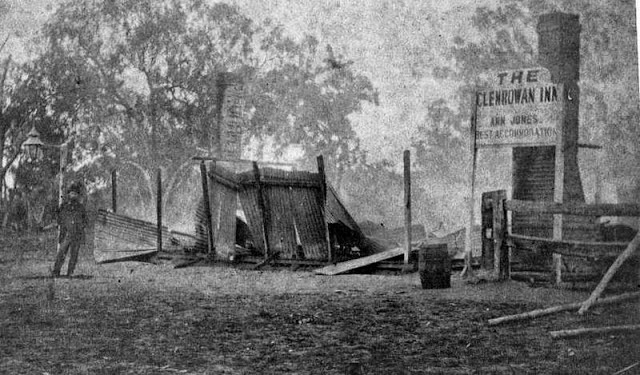 Lets state it bluntly : Ned Kellys plan for Glenrowan was to create a bloodbath. If carried out in modern times such an act would appropriately be called terrorism.

His plan was to firstly murder Aaron Sherrit in the expectation that this would result in Police being sent by train from Melbourne. Just think about that for a minute – a man who Ian Jones says wasn’t ruthless enough arranged for an old friend to be murdered in cold blood as a prelude to Kellys “colonial stratagem for Glenrown! But this is indeed what happened – Joe and Dan murdered their former friend at the front door of his home, and after some delays, a trainload of Police headed north from Melbourne.

Next the plan was to derail the train and , wearing protective armour suits made over previous months, slaughter any survivors. Try to imagine what a merciless horror show that would have been – faceless men in armour picking their way through the mangled wreckage of a train wreck, killing the trapped wounded and maimed and half dead survivors, while the innocent women, the train drivers and horses bled to death or died from their wounds.

But, in a nutshell, that was the Plan.

The intent of the well known imprisonment of hostages at the Glenrowan Inn, was to prevent anyone from warning the train of the carnage lying ahead. The Gang had assistance with this by secret inclusion among the hostages of a number of “sympathisers The armour was supposed to be used at the site of the train wreck, not at the Inn but this part of the plan failed because as we all know, Thomas Curnow tricked Kelly into letting him go. Bravely and despite grave threats to the lives of his family and himself, Curnow subverted the entire plot by stopping the train from continuing to its destruction on the other side of Glenrowan. The Police then surrounded the Inn and a prolonged shootout followed – Ned Kelly was captured and the other gang members were killed along with a couple of the gangs innocent hostages. Far fewer innocent lives were lost than would have been the case if the gangs plot had unfolded the way they intended.

These facts about what happened at Glenrowan are more or less undisputed. What’s hotly disputed however is the question of motive. Had Ned Kelly’s hatred of Police and his fury at their treatment of his family reached such white hot intensity that all he wanted was revenge, to go on a rampage and kill as many cops as he could? Thats the scenario that fits all the known facts. Or was there something more to it?

In his book “The True Story of Ned Kellys Last Stand” Paul Terry has these things to say in Chapter two: “When Ned Kelly and his gang held Glenrowan hostage in June 1880 they were committing more than a crime. They were trying to start an uprising, perhaps a full-blooded revolution., to create a republic of north eastern Victoria”
And later : “…(Ned Kellys) plan for the uprising at Glenrowan was horrifying. Backed into a corner he was plotting the mass murder of two dozen people in a train crash and with it a call to take up arms against the government.” For Paul Terry, there is no doubt about it, and he presents it as established fact – Glenrowan was all about an uprising, a rebellion against the Government and the establishment of a republic of North East Victoria.

Ian Jones, the Kelly authority second to none, is a little more careful: “To break the railway line on the high curve past Glenrowan, sending the Police train and its men and animals down to their destruction in the gully bed behind the locomotive, plunging like a comet, was perhaps another symbol. If it was, it was also an act of war. It had to be or it would be simply mass murder” Elsewhere Jones describes the Glenrowan incident as “madness” – unless of course its inspiration was some higher political vision, and in another place “The Glenrowan campaign is inexplicable without the central carefully obscured fact of the republic”

By saying that the “fact” of the Republic was “carefully obscured” Jones creates a licence for himself to invent and then “reveal” from its obscurity anything he likes. The obvious example is his investment of the term “colonial stratagem” with republican meanings that disappear when the term is looked at in proper context.

Another example is this: “One Police agent broke the inner circle of sympathizers and heard about the armor being made though he failed to learn of the republic” NOT hearing anyone talking about a republic is turned on its head by Jones to bolster a view that not only was such talk taking place but it was such a closely guarded secret that a person who “broke the inner circle of sympathizers” heard nothing about it. The much simpler explanation that doesn’t suit Jones is that the spy heard nothing about a Republic because it wasn’t a topic that anybody was talking about.

The real problem here is that Jones just doesnt want to accept what is obvious even to him, that Ned Kellys plan for Glenrowan was indeed madness and was indeed intended to be mass murder. This reluctance leads him to invent an explanation that leaves his fondness for Ned Kelly undiminished – by sleight of hand a man planning mass murder is transformed into a visionary, a leader and a man of ideas and destiny. In fact, when you think carefully about it, there is something absurd in the suggestion that these two personalities– the visionary and the mass murderer – could reside in the one man – unless he was mad.

The reality is however that in spite of Jones optimistic hope, there is no evidence that the visionary ever existed. As we have seen in our detailed analysis of the Jerilderie letter, it does not contain, contrary to Jones assertion, “…..the only available fragments of a rebel manifesto that underlay his attempt to proclaim a republic in the north-east.” In fact  as was shown in the detailed line by line review of the Jerilderie Letter, it contains nothing about the republic and is not a manifesto. These assertions can only be made by cherry-picking bits from here and there and quoting things in isolation from their context, and by illegitimately ascribing meanings to words and phrases to try to make a case. Nowhere does Ned Kelly discuss a rebellion or a Republic or an uprising – his talk of “a colonial stratagem” is about as near as it gets but that could have a dozen different meanings.

The problem for Ian Jones and Paul Terry is that its not as if Ned Kelly had very little to say, and we have to sift through scraps of conversation or writing to try to discern his innermost thoughts and ideas. On the contrary Ned Kelly had LOTS to say, not just in the Jerilderie letter but directly to hostages during Bank Robberies and at Glenrowan and in other letters and interviews after his capture – NOWHERE does he talk about a revolution or a Republic or make reference to the wider community, or the poor in general. What he talks about is himself and his family, and it is clear from the Jerilderie letter that Neds family, and particularly his perception of the police treatment of his mother, along with his explosive hatred of the Police that motivates him. These intense personal obsessions are more than enough to explain the “madness” of Glenrowan.

Interestingly, Jones quotes something attributed to Ned that supports this notion perfectly. “Ned claimed there was an alternative plan: ..to capture the leaders of the Police and take them into the bush and allow the superintendent to write to the head of department and inform them that if they send any more Police after me or try to rescue him I would shoot him and that I intended to keep them prisoners until the release of my mother, Skillion and Williamson” In another statement of the plan “I was determined to capture Superintendent O’Hare , O’Connor and the blacks for the purpose of exchange of prisoners” This statement attributed to Ned – but unsourced in Jones book (A Short Life)- is as clear an indication of what his thinking was in relation to Glenrowan as any, anywhere: it was about family. His “colonial stratagem” was about obtaining liberty and justice for the sufferring “innocents”, his mother and the others imprisoned after the “Fitzpatrick” incident.

When it comes to understanding Glenrowan, what we have is mountains of evidence that Kellys preoccupations were with family and with corrupt Police whom he came to see as an enemy, and he formulated a mad plan to trap and kill as many of them as he could at Glenrowan in the vain hope that somehow this would result in freedom for his mother, perhaps by a prisoner exchange. He didn’t say anything about a Republic, nobody reported that he talked about a republic, he didn’t dictate anything about a Republic either before or after Glenrowan, and the claims made decades later about such a thing have nothing to support them, other than assertions made by old men, about notebooks and a document that no-one has seen in over 50 years of searching. To put it plainly there is no actual direct evidence anywhere that Ned Kelly ever thought about, let alone had a plan for a Republic of North East Victoria.

And yet, Paul Terry has this to say “Today we still argue whether the plan was a declaration of war or a terrorist plot” The reason there is still a debate is because there are still people who in spite of the facts are unwilling to believe that Ned Kelly was not a visionary and a leader of men and a worthy role model and Icon. To their dismay when they look at Glenrowan, they see “madness” and “mass murder” – they have no option but to create an imaginary motivation for Ned , something that leaves them still feeling good about him but which has nothing concrete to support it. If you want to assert things about Ned Kelly for which there is no evidence, then you can assert anything – you could say with equal authority that Ned Kelly was planning to design and build the first airplane – theres no evidence for that either. But please don’t talk to me about Ned Kelly and the republic of North east Victoria – that idea never entered his head.