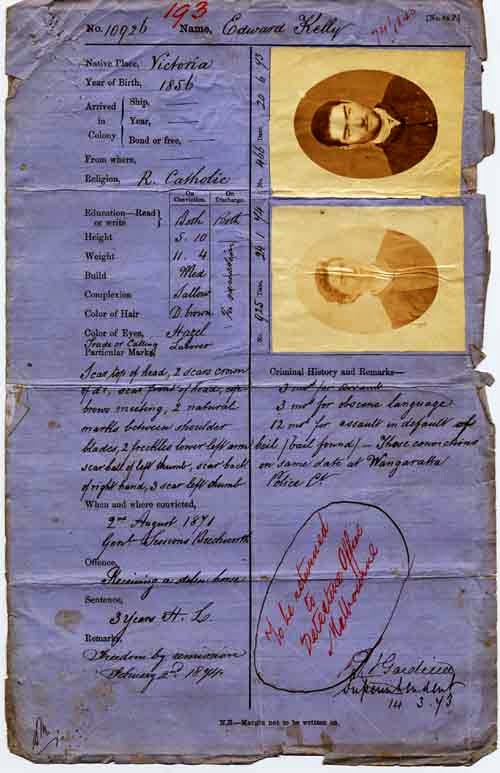 Assault and Robbery with violence

Hanged for Murder :11th November 1880
Given that there is supposed to be a debate about whether or not Ned Kelly was a criminal or a hero you might have expected to be able to easily find in the Kelly literature a simple List of  all the criminal charges that were leveled at him. After all, there seems to be no end to the parade of authors, commentators, movie makers, tour operators and souvenir sellers who seem to want to perpetuate this notion that  there is some sort of balance between the arguments for and against, and therefore one might expect in the interests of balance  equal time and space might be made for both sides of the argument. In fact, the public discussions are overwhelmingly about the Heroic Ned. It is of course a false dichotomy – a tactic aimed at trying to maintain a space for the Hero myth and at the same time diminish the influence of the historical truth about Ned Kelly, that he was in reality a Villain.
So, in the interests of balance, I am going to remedy an obvious deficiency in the 20 year history of Ned Kelly online and list for discussion Ned Kellys Charge sheet, point by point.  Sympathizers will says its “anti Kelly” and that this is because I am a “hater”. But my interest is in historical truth, and unless Kelly sympathizers want to abandon their over used tactic of saying the argument is still unfinished they will have to agree that these discussions are a legitimate part of the debate.
Todays Post will be about the first two charges : Assault and Robbery with violence, and Highway Robbery, both of which were dismissed.
The first relates to an altercation between Ned Kelly and a Chinese Hawker named Ah Fook.  Following Ah Fooks complaint  that he had been beaten and robbed the Constabulary arrived the following day to arrest Ned, but he bolted out the back door and headed for the bush, as any innocent person would! However he was chased down and arrested. In court, one of the witnesses was Annie a sister of Ned, another was a man who later married  Maggie, another  sister of Ned, and the third witness was an employee of Ellen Kelly! One can hardly have expected these witnesses not to back Neds version of events but because they all contradicted  Ah Fooks version the charge was dismissed, but understandably
“ with apparent reluctance”, according to Ian Jones.
As is so typical of stories involving Ned Kelly, the truth is hidden under a confusion of differing descriptions, suspicion of collusion between the witnesses, and by inconsistencies between Neds protestations of innocence and his actual behaviour. Ian Jones as he so often does, recounts the truths that sometimes must hurt him to report, but quotes Beechworths “Advertiser” which wrote
“ It is impossible to avoid coming to any other conclusion that the charge of robbery has been trumped up by the Chinaman to be revenged on Ned Kelly, who had evidently assaulted him”
Jones than adds
“That may well have been true though it means that the Kelly witnesses also lied”
Jones also quotes the Benalla Ensign:
“The cunning of Ned and his mates got him off”
So what does this tell us about Ned and the Kelly story? This is clearly NOT a story of police corruption, of persecution  and harassment of the poor and innocent selector, of  a harsh Judiciary oppressing the  rights of hardworking farmers – A chinaman complained he had been assaulted and robbed, the Police did their job, the Courts did theirs and the case was dismissed. If Ian Jones is right it is in fact a story of a youth who has a problem with self control, a person who later bragged about how he liked to use his fists, who assaulted a disgruntled Chinaman, and of a family ready to lie to protect him. Can someone please show me whats Iconic or admirable or a role model in any of this? I hope Kelly supporters  don’t believe that family values includes lying to protect violent offenders.

Looking for the IO discussion on this important topic, Ned Kellys first appearance on a serious charge in Court, all I could find were  two inaccurate sentences – the magistrates name was not Wyatt but Willis, and he was arrested for assault and robbery with violence – but this is all they wrote:
” At the age of fourteen, in 1869, Ned was arrested for assaulting a Chinaman. He was kept in the Benalla lockup for 10 days and then reluctantly released when the magistrate, Alfred Wyatt, dismissed the charge.”
I have talked before about the airbrushing of history that pro- Kelly writers are so fond of doing – this is a perfect example – a disgraceful episode in the life of a 14 year old Ned Kelly that  they want to forget about, and so, in their narrative it hardly rates a mention! In contrast to that, the same IO article devotes 5 times as many words to the heroic story of Ned at the age of 10, rescuing Dick Shelton from a flooded creek. Puberty had certainly wrought some nasty transformations in the mind of this former hero.
So what of the next charge on his Sheet, two counts of Highway Robbery in the company of Harry Power? Power was an escaped prisoner who became known as a Gentleman Bushranger, and Ned became his accomplice in mid 1869 for a short time, and then again for a few months at the beginning of 1870. His first spell as Harrys assistance ended in humiliation for Ned when they were discovered and shot at, and as a result of Ned panicking, they were nearly caught. A clue to why Ned accompanied Harry in the first place, and why despite the humiliation he returned a few months later is provided by Ian Jones who says that after the first episode  Ned “returned empty handed to the winter world of boggy tracks and swampy paddocks and the day-to-day drudgery of 88 acres”
In truth working a selection was a long, difficult back-breaking slog, there was no glamour or excitement in it, and it was almost impossible to make a living from it, especially in the early years. By contrast, Bushranging had too much to offer – a glamorous wild life on horseback, easy money, short hours, travel…
In the end, after only a few months Ned gave it away for the second time because Harry was too difficult a person to live with. But when he returned to his mothers place, the police were ready for him and he was arrested in a dawn raid. By then, there was a reward offered for information leading to the capture of Power of 500 Pounds, the equivalent of 10 years labourers wages. It seems that in their eagerness to get Power, the charges against Ned were serially dropped as he provided them with information and assistance in their hunt for Harry. Later, they lent him money to pay for hotel accommodation and expenses and though he promised to repay it, he never did. According to Ian Jones an offer was made to help Ned resettle out of the district and away from the criminal environment of his extended family, but in the end he returned to them, complaining that everyone believed it was he who had betrayed Harry Power, and so regarded him as “a black snake” In fact Jack Lloyd led Police to Harry, but the reward went to Jimmy Quinn, one of Neds uncles. The family were obviously prepared to work with Police when there was something in it for them!
So were these charges against Ned trumped up charges against an innocent downtrodden selector trying to look after his mother and her poor farm? Was this a case of an innocent person being persecuted by corrupt authorities, as the Kelly myth makers would have us imagine were the real basis for Neds unfortunate interactions with the Police? Clearly, the answer again is NO, emphatically NO.
Neds life was poor, but nobody forced him to become the associate of a wanted criminal did they? Isn’t it rather a case of a young man wanting to escape the drudgery and the hard yards of selector life, preferring the money and the glamour, the “ flashness” and the thrill of the life of a bushranger in the company of the admired Harry Power? It was nothing to do with Politics or the Republic or social injustice – it was simply an attempt that is motivated like most criminality, by a desire to find a short cut out of a hard life. The Law caught up with him and treated him leniently.

Ironoutlaws account of this episode makes light of it, and makes no mention of the support Ned received from the Police. But what Ned was involved in was robbery of innocent and terrified travellers at gunpoint. Again I ask can someone please show me whats Iconic or admirable or a role model in any of this?
(Visited 113 times)
Comments (9)