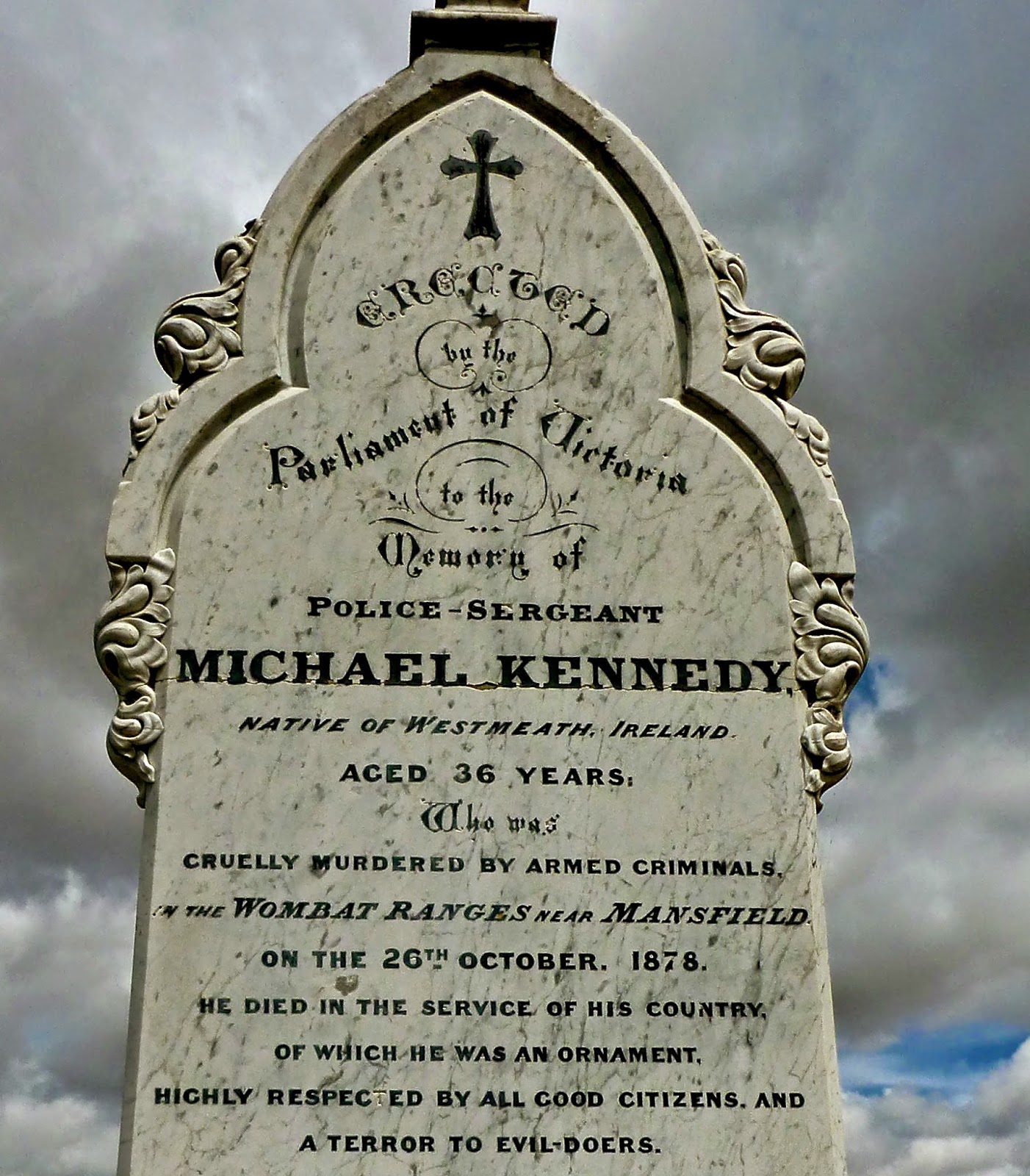 “Exploding the Kelly Myth” is the sort of line I could have written,  but the line that grabbed my attention was on the front of The Good Weekend Magazine. I could hardly believe my eyes – and tried not to get my hopes up as I turned to the article entitled “The True History of the Kelly Victims” on Page 14.
Frankly I am getting sick and tired of self-promoting Solicitors and poorly informed so-called journalists and Gallery Curators who cant be bothered asking the hard questions about the Kelly Myth, who just churn over the same tired old lines, rehash the propaganda and unreliable family traditions that glorify Ned Kelly and the Gang. My stomach turned when I watched the Senior Curator of the Bendigo Art Gallery on You Tube say of Ned Kelly the boy
“ I think he was a boy who experienced really tough times in his life”
– oh really? And was that saying something important about him? It would be like being asked for a few words about the life of Adolf Hitler and saying he struggled as a young Artist and his water colours never received proper recognition – completely missing the essence and the truth of the man. And even though there is a small noisy group of fanatics who think Hitler was a Hero, I  don’t recall ever seeing a Journalist asking random people on the street “Adolf Hitler- hero or villain?” When are they going to wake up to the fact that the question has already been answered for Ned Kelly too? And no doubt the self-promoting Mr Suta hasn’t gone running back to the  slack Journo on the local Rag to announce why the much hyped letters that he promoted and we discussed here in January have NOT been included in the BAG Exhibition.
So what of this latest Kelly Article? Well, I wasn’t disappointed – in fact I was pleased to read something from a Journalist who for once wasn’t prepared just to regurgitate the old villain-hero rubbish but instead look a bit deeper into the story, and say something important.   The victims being referred to are of course the good Policemen who were killed at Stringybark Creek, and I was delighted and surprised – but I guess I shouldn’t have been, given the location – to read references to “the Melbourne based Stringybark sleuth”, Bill Denheld! Yes, our Bill! The Stringybark Sleuth has a nice ring to it Bill!
“ I just want to see things right” he is quoted as saying. Exactly!
The article is about yet another Victorian Lawyer, Leo Kennedy the great great grandson of Sergeant Michael Kennedy, the Irish Policeman chased through the bush and killed by Ned Kelly with a bullet fired at Point blank range into his chest. The article says that “for decades Kennedys family maintained an outraged silence as Ned Kellys folk hero status grew. That changed in 2012….”
One important thing I learned from this article was that originally the so-called Kelly Tree had the names of the slain Policemen carved into its trunk.  Leo Kennedy used to be taken there by his father as a kid to see them – but quite some years back they were concealed by a replica Kelly armour that was fixed over the top of the names. What a disgrace! Such disrespect – but how typical of Kelly fanatic behavior that continues to this day, hiding the truth and denying the murderous reality of the Kelly Gang.
Even in Mansfield where the Policemen are all buried, Kelly fanatics had somehow persuaded local authorities to direct tourists to the graves with signs sporting Kelly armour.  Imagine signage to ANZAC War Graves with Swastikas on them! Disgusting! Leo and his family protested and in 2013 the signs were changed, the graves tidied up and rededicated.
And the fightback continues, as Leo has been working with Bill to “find and mark the path of his great grandfathers final flight, and the place where he died” This ties in with Bills other great quest, to have the authorities acknowledge that his Two Huts site is in fact the true site at which the other two Policemen were murdered, and the place where Kennedys flight began. Leo, Bill and members of  “an International network of History specialists, the Past Masters” are hoping to persuade Heritage Victoria to approve a proper archaeological survey of the site and establish its bona fides once and for all.
So, as the article says, things started to change in 2012, which was also the year that The Kelly Gang Unmasked was published. Perhaps the book added to the Kennedy family’s resolve to end their “outraged silence” but change has continued, the tide is turning and the Kelly fanatics domination of the story is gradually being rolled back. Since then Morrisseys book has been published ( Ned Kelly : A Lawless Life), the Mc Cormick book has been published (Ned Kelly Under the Microscope) and the terminal decline of the worlds greatest Kelly website  (Iron Outlaw) and of the Ned Kelly Forum has continued into irrelevance – a quarter of the year has gone and except for the Ned Kelly Forum members being forbidden to discuss this Blog, literally NOTHING has happened on either of them. I might also modestly hope that despite that, this little Blog is also contributing in some small way, as visitor numbers continue to climb, Posts attract lots of comments and the Fanatics have all but given up their futile attacks on it. This Good Weekend article is a further advance in the Truth telling about the Kelly Outbreak.
Meanwhile, despite the abuse of the Kelly fanatics Bill  continues his relentless search for the truth and for justice for Leo and the other Policemen at Stringybark Creek. Well done guys!
(Visited 40 times)
Comments (10)