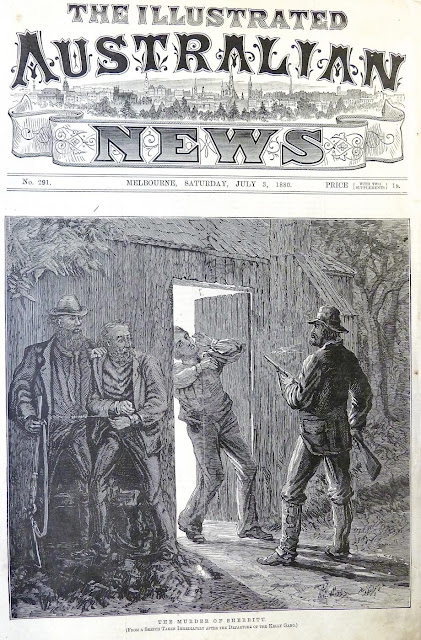 The ambush and murder of three innocent Policemen in the bush at Stringybark Creek was a monstrous crime committed by a Gang of Four led by Ned Kelly. One would have thought that killing three innocent Policemen would have been sufficient payback for the jailing of Ned’s mother, if indeed that was his motivating grievance. There’s no doubt he sought the Police out to kill them, and though he says it was “self defense” – an excuse that doesn’t stand close scrutiny of what actually happened at SBC – Ned Kelly did have other options, such as fleeing Victoria altogether.  But no, three dead innocent Policemen were not enough for Ned Kelly, he wanted to kill more, many more, and so devised an evil scheme that required the murder of yet another innocent man to act as a trigger,  this time one of his own people, a selector, a poor farmer and former friend named Aaron Sherritt.
The basic facts are well known: Joe Byrne, – Kelly Gang “Lieutenant” according to Ian Jones – tricked the unsuspecting Aaron into opening his door at night, whereupon he was immediately shot twice and killed in cold blood. This murder was carried out with the purpose of provoking the dispatch of dozens of Police to the region in a train that would speed into a trap set for it at Glenrowan where the Gang had removed a section of track. The train would crash down a steep embankment, and the Gang in their newly made armour would kill any survivors. That was the plan.
The justification they gave for the execution of Aaron was that he was co-operating with the Police and had betrayed the Gang. It was also complicated by a dispute that had arisen between the Sherritts and the Byrnes, Mrs Byrne having told Aaron that Joe would kill him if he knew what Aaron was up to. There was also a dispute about a stolen saddle and some bad language between them. However like many of the Kelly stories, the claim that Aaron was a traitor doesn’t stack up. Instead it very much looks like Aaron was playing a sophisticated double–cross, making a little money on the side and rather cleverly gaining intelligence from the Police and preserving the Gangs freedom.  As far as I can tell  Aarons activities resulted in frustration for the Police and not the slightest extra trouble for the Gang
This is what Ian Jones writes in The Fatal Friendship
“Ned was reluctant to believe Aarons betrayal and he may have opposed the killing. But he was prepared for bloodshed- perhaps  on a horrifying scale. If Joe was now committed to killing his mate this death like the others  must be seen in the context of warfare. If Aarons death was inevitable it must be part o the campaign plan”
Ian Jones is suggesting here that Joe Byrne had decided to settle the private quarrel between the Byrnes and the Sherritts  by murdering Aaron,  a solution which seems  extreme  given the relatively minor nature of the disagreement between them.  I woudnt be surprised if the truth was that Joe was NOT “committed to killing his mate” but Ned Kelly made it so by incorporating it into his plan to kill more Police. Ned Kellys  obsession with exacting terrible revenge on the Police had become so intense that nothing would be allowed to stand in its way, not even the possibility that their chosen sacrifice was an innocent man. Ned Kelly  was more than willing to use the petty feud that seemed to have developed between the two families as an opportunity to create the necessary human sacrifice that would make the police come running. This is typical of a psychopath.
Who knows where Jones gets the idea that Ned may have been reluctant to believe in Aarons betrayal – but it highlights the great uncertainty right to the end about what sort of game Aaron was playing at. The Police suffered the same uncertainty:  they were never entirely sure if Aaron really was on their side.
I have read and re-read Ian Jones book ‘The Fatal Friendship’, to try to get clarity on Aarons true purpose, but even Ian Jones seems to struggle to understand what was going on.  Nobody seems prepared to state categorically that Aaron betrayed the Gang, because no-one can point to any particular harm that came to the Gang or to sympathisers or anyone else as a result of Aarons behavior.  On the other hand nobody seems  prepared to say that Aaron was innocent because doing so would imply Ned Kelly and the Gang had made a ghastly blunder in killing him.
My interpretation is that Ned Kelly needed a dramatic event that would attract Police into his trap at Glenrowan, and he decided to make it Aarons murder. He used the dispute between Aaron and the Byrnes, and the confusion that surrounded Aarons police interactions to portray him as a traitor and an enemy, and to provoke Joe into killing him. Whether or not he was a traitor, or the personal dispute justified a murder was irrelevant – he was just a pawn in the Kelly scheme to exact revenge. This is another clear example of Ned Kelly’s rhetoric  being completely discredited by his actions : claiming to speak for the innocent , he was happy to use abuse and even murder them when  it suited.
One question I think  worth asking is what evidence is there for actual harm resulting from Aarons behavior ?
And the other is, wasn’t Aaron another of Ned Kelly’s innocent victims?
(Visited 132 times)
Comments (7)

7 Replies to “Another Innocent Man Murdered by Kelly Gang”