Today, November 25th is National White Ribbon Day in Australia, a day in which we are supposed to be reflecting on the dreadful scourge of mens violence against women. So far this year in Australia, 78 women have been murdered by men, and countless thousands bashed intimidated and traumatised by their intimate partners. Last night many of us will have watched Part One of journalist Sarah Fergusons gut wrenching investigation into this horror on ABC TV, and if we can stomach it will watch Part Two tonight. This morning I was listening to a discussion on the radio on the same topic and heard that the Federal Government has released “disturbing research which finds dangerous attitudes about violence towards women are deeply entrenched.It shows women are often blamed for attacks against them, men are excused with phrases like “boys will be boys” and the severity of the violence is played down.”

Hearing the phrase “boys will be boys” made me immediately recall how common it is to read the Kelly Gang being referred to as “Boys” and just as immediately I realised that the use of this term has an exactly similar effect on perceptions of the behaviours of the Kelly Gang, who were not cuddly scallywags and larrikin “ boys” at all but were grown mature men. Calling them “boys” is a device that somehow excuses much of their violent and murderous behaviour in the same way as people sometimes excuse men who bully women with the same label, implying that as “boys” they are not fully responsible for their actions. The Kelly Gang were adults, they were grown ups, they were men not boys. They were entirely responsible for everything they did and for the consequences of those actions – ( and that includes the death of hostages )

Its interesting see that the modern Kelly myth conforms remarkably closely to the findings of the research mentioned above : victims are blamed ( Kelly blamed the SBC deaths on the victims) men are excused as boys (a popular term in the Kelly world) and the severity of the violence is played down (the planned massacre at Glenrowan is always glossed over)

This “ excuse making” is really what the entire pro-Kelly sympathy network is predominantly engaged in, in making excuses for a life of extreme violence that grew out of an environment of hatred and prejudice. We excuse Neds bullying and thieving and murder by saying he was one of the boys, he was hard done by, his father died when he was 11, the Squatters were greedy, he was poor, the Police were corrupt, he was actually a great guy who knew the Bush and was a skilled rider, he never really meant to kill anyone, it was self defence, he had a great way with words, he was charming to women, his trial was unfair, he was a revolutionary planning a Republic of North east Victoria….endless mostly fabricated excuses for a life of horrible violence that led to the death of three Policemen, his brother, three friends, two hostages and of Kelly himself, not to mention the trail of traumatised victims of his robbery and hostage taking. Wake up Australia, this was a life of horrendous violence!

And this indisputably violent man and proven serial liar, receiving the benefit of all the doubt and the endless string of excuses is promoted as an Icon in Australia! Surely, this is ridiculous and has to stop!

The truth is that if women are going to be protected from violent men, men are going to have to be made accountable, the excuses are going to have to stop, and all violence and intimidation  must be universally and unreservedly condemned. The same has to happen to Ned Kelly.  Regarding Kelly as a hero and making him an Icon is undoubtedly part of the mix that contributes to the violence in our society, and to the violence against women – how could making a violent Killer a hero and national Icon have any other effect ? – its a farce and the great Australian romance with this man needs to end : his violence needs to be called out for what it was : inexcusable, unacceptable, wrong and only worthy of condemnation. The excuses of people who want to claim him as an Aussie Icon and hero need to be challenged – their justifications are all based on fabrications and fairy stories about him, as I have discovered in the last 18 months on this Blog. Its all here for anyone to read, and for anyone to challenge – but of course, there have been very few challenges – the sympathisers make endless excuses about why they won’t challenge but the real reason is clear : mostly they know they haven’t a leg to stand on, so they resort to bulling and abuse.

What this means for me is that I am no longer going to accept the tactic that sympathisers use to keep Ned in the headlines, by saying the jury is still out on the man, that we can never know if he was really a  hero or a villain or something in-between. This is just a dishonest ploy that takes advantage of the average Australians reasonable  fair-mindedness when faced with a question about something they don’t know much about. The truth, as I have discovered and revealed on this Blog, is that we most certainly CAN answer that question : Ned Kelly WAS a villain. He was a bank robber and hostage taker who planned mass murder. He was a violent killer. He was a liar. Most of the popular beliefs about him are wrong. There was never a Republic of North east Victoria. None of the excuses offered for him are acceptable.

The other thing it means for me is that I am going to be a lot less tolerant of the rubbish heaped on me by Kelly sympathisers.  I am not going to be bullied and I am going to make their bullying and intimidation Public whenever I get the opportunity, so everyone will be able to see what these thugs are really like, and what Kelly Sympathisers are capable of. The truth is that Kelly idolatry is simply wrong, it is misplaced and based on ignorance; it promotes violence and thuggery; there is no place for it. I’m over it!

And I am starting here, right now, with this Comment from an anonymous Sympathiser that I received today, a typical example of Kelly thuggery and vulgar intimidation:

“You are a real piece of sh*t, man the f**k up you gutless dog, you seriously have no idea about who knows who and have helped them out in the Kelly community. You are nothing but a gutless Bowral butcher. I’m coming up your way next week with a portfolio of defamation which I intend to produce at you in your office in front of your clients. YOU ARE A C**T OF A HUMAN BEING AND AS LONG AS YOU HAVE MODERATION ON YOUR SH*T BLOG EVERYONE KNOWS IT IS JUST YOU POSTING.”

And heres vision of a man from todays paper, a man engaged in violent racist protest, another great advertisement for Ned Kelly: 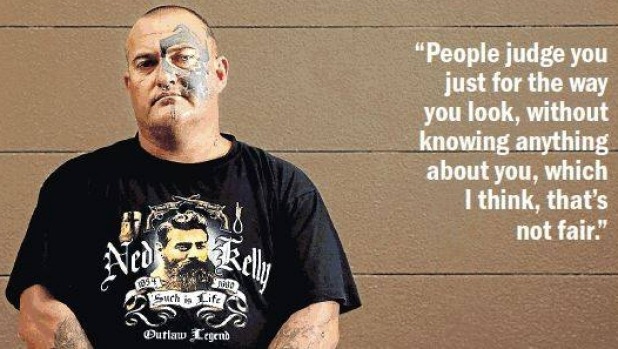 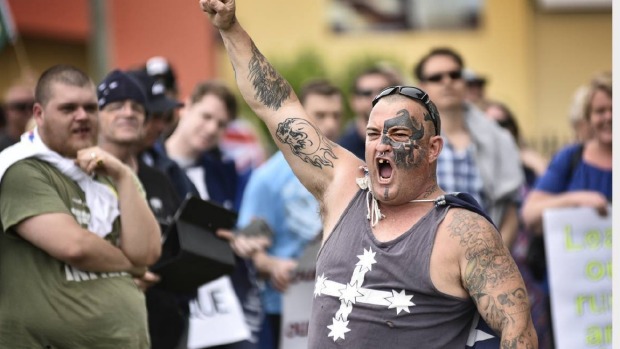 I realise there are a few reasonable Kelly sympathisers out there. They are mostly harmless, but by supporting the elevation of Ned Kelly to Hero status and not questioning his status as an Icon, the ground is kept fertile for idiots like these.
Instead for the sake of women in our community, lets no longer accept a violent killer as an Australian Hero. Instead lets dispose of this unfortunate icon and make it crystal clear that we regard his life style and behaviour as totally unacceptable, and there were no excuses for it. Getting rid of Kelly idolatry will make Australia a better place.
(Visited 121 times)
Comments (9)

9 Replies to “The Kelly Gang were not “Boys””