This is a Guest Post submitted by Mr Peter Newman, and I sincerely thank him for this excellent contribution to the Blog.  He has set a high standard and I look forward to more reader submissions, and a broadening of the scope of this Blog into the future. We are now setting the standard when it comes to Kelly places on the Internet. Thank you again Peter. 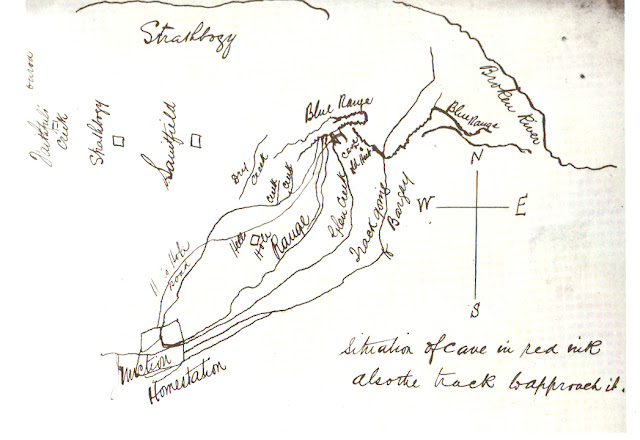 A letter dated 18 October 1878 was sent to Inspector Nicholson of the Police Department in Melbourne, tipping him off that “such persons as the Kellys” might be found at a cave location which, for convenience, I will simply refer to as being in the Blue Ranges (and a considerable distance from Stringybark Creek) .  The letter was therefore sent a week before the Stringybark Creek murders.
The letter was signed by James Winter, from Tarringilo, Murchison. The letter is held by the Public Records Office Victoria and can be viewed via the following link: http://prov.vic.gov.au/whats-on/exhibitions/ned-kelly/the-kelly-story/string-bark-creek/a-cave-near-murchison 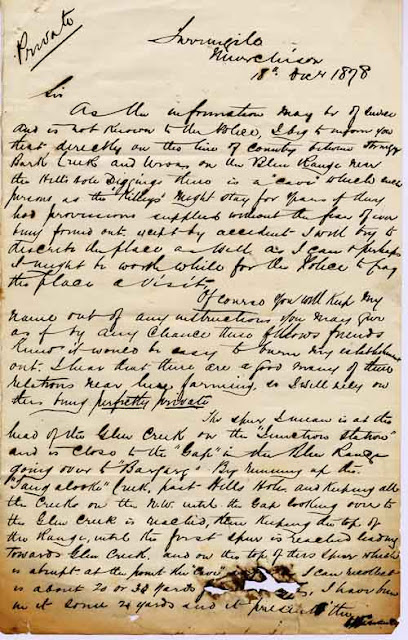 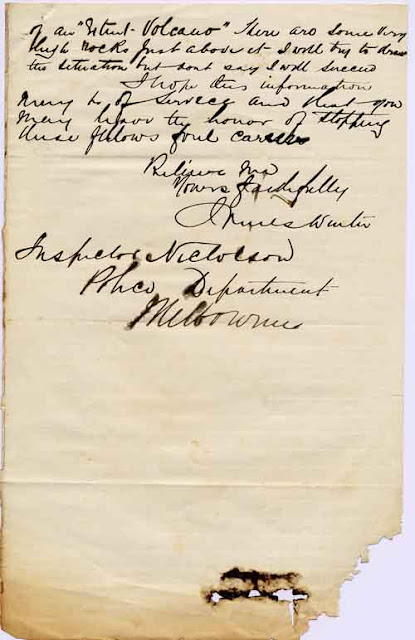 The cave is well known, but not for its links with the Kelly story.  Someone named Stephen Handbury earlier this year “found” the cave in the sense that he established it as the cave referred to in the directions contained in the letter.
The James Winter letter is mentioned in a number of books, but to my knowledge no-one has made a concerted effort to find out more about it.
Tarringilo sounds like the name of an Estate or Property, but I can’t find any record of it on the early Parish maps of Murchison.  Maybe one of your readers might know?
I also wonder if anyone might know anything about James Winter himself. Did he really exist, or was this a false name?  For what it is worth, I suspect he likely did exist, because why would you bother to request anonymity (as the writer did) if you were signing off with a false name?  A false name would also have been quickly realised and the letter dismissed accordingly.  My gut feeling therefore is that the letter was in fact written by someone named James Winter in the knowledge that the requested anonymity would be respected.
Assuming then that James Winter was the writer’s real name,  then who was he?  I have done some preliminary research and wonder if he might have been connected with the Winter family who were prominent in the Australian Natives’ Association.  Murchison is in the Goulburn Valley and the Winter family had property in the Goulburn Valley, although exactly where I don’t know.  One of the Winters (Samuel) also had connections with the Baillieu family (they were joint owners of the Herald newspaper) who I understand had (maybe still have) property interests near Mansfield.
If the “tip off” letter was written by a Winter connected with the future Australian Natives’ Association, then this is all very interesting and you would have to wonder about that person’s motivations.  Some historians such as Bill Denheld believe the Kelly family had links with families who were prominent in the Australian Natives’ (could we call them early Republicans?).  If this is the case, then you would have to wonder if the letter was a genuine tip-off by someone who had become disenchanted with the Kellys (although the way the letter is written, it would appear the Kellys are not known to the writer).  Or was it deliberate misinformation written by someone who had knowledge of the impending police search to find the Kellys and who wanted to send the police away from Stringybark Creek.  In this regard, the timing of the letter (1 week prior to the shootings) is interesting given that the Kellys had by this time been fugitives for nearly 6 months (the Fitzpatrick incident having occurred on the 15th April 1878).
Can anyone add anything of interest to this?
(Visited 118 times)
Comments (24)

24 Replies to “Prelude to Stringybark Creek”