The Kelly Vault calls itself a History Museum, and is dedicated to the preservation of Kelly history. I was encouraged to see  this quote from the Manager of the Burke Museum on their Facebook Page  “We are not a SHRINE. We are a MUSEUM” Also on their Facebook Page there is a reference a to an ABC interview with Doug Morrissey and in another place mention of Doug Morrisseys 2015 publication “Ned Kelly : A lawless Life” – along with a single negative comment about it –  so I thought I could discern a willingness by the people running the Vault to at least attempt some sort of even handedness.I felt quite positive about the Vault.
Not so long ago I visited the Museum. Its housed in an historic  little four room building known as the old “Sub-Treasury building” on Ford St in the Historic and Cultural Precinct of Beechworth.  Its right next door to the Beechworth Courthouse the place where Ned Kelly’s commital hearings took place for the murder of Lonigan.  You can stand in the very dock where Ned stood and remember that well known etching of him standing there, holding his lapel with his left hand, full beard quite neatly trimmed.  But don’t forget Ellen Kelly also stood there once, and Standish, Fitzpatrick, Sir Redmond Barry, Gaunson, McIntyre and a host of other Kelly identities have also stood or sat somewhere in that room which you are free to explore at your leisure. (Incidentally, as you do so, and listen to the broadcast of audio re-enactments of snippets of court activities, see how good your Kelly knowledge is and identify the major factual mistake in one of them – and post it in Comments if you do!!   Frankly I was so surprised when I heard it the first time I couldn’t believe my ears so I had to listen through the entire tape again to make certain. God only knows how many Kelly buffs have heard that tape and missed it!)

Straight across the road is the Town Hall, another building that Ned Kelly would have been familiar with, and around the back of it you can enter the Cell that once held Harry Power! And looking up the road you see the grim walls of the Beechworth Gaol. All in all it’s the most concentrated bit of Kellyana anywhere. 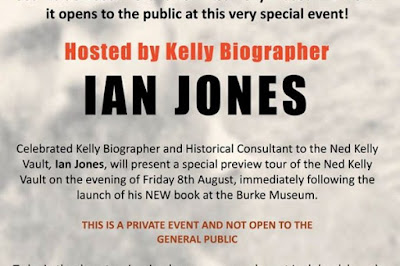 Clearly Ian Jones wields enormous power in the Kelly world around Beechworth, and equally clearly, nobody dares challenge it. Further proof of this might be in the fact that in the many bookshops and places in Beechworth where Kelly material is sold, its impossible to find a copy of Ian MacFarlanes book The Kelly Gang Unmasked, or of Doug Morrisseys book, A Lawless Life, but Fitzsimons book is available and of course  at many places you can buy Ian Jones latest, The Kellys and Beechworth.
So here is the challenge for the Kelly Vault and for Matt Shore who appears to be its main promotor : do you want the Kelly Vault to be a worthy Museum that tells the Kelly story without fear or favour, with integrity and respect for honesty and openness? Or are you going to allow it continue to promote the dodgy Jones-Kelly Myths, and be part of Ian Jones determination to silence anyone who dares question him, and become simply another vehicle for the promotion of his private fantasy about Ned Kelly, a virtual Private Museum? If thats what you’re going to do then maybe Ian Jones and his supporters, and maybe Joanne Griffiths and people like Noeleen Lloyd  and the Kelly family should be the ones funding it, not the State Government. Its not the job of the Government to fund private hobbies.

I am not asking the Vault to tell the story MY way, but its Kelly sympathisers who keep on insisting the  Jury is still out on Ned Kelly.’Man or Myth? Hero or Villain?’  it says right at the entrance to the Vault on a Ned Kelly Adventure Camps poster which describes the Museum as “ Our new museum”! But if thats what they believe why aren’t they putting the other side of the argument to the public as well? In fact, not putting the other side of the argument in the Museum, and heavily promoting the Jones-Kelly myths alone proves what I have been arguing all along, that this “Hero or Villain” argument is not a sincere argument but a tactic of the Kelly Sympathisers.

At the moment, the Vault is more of a Shrine than a Museum. I am so disappointed.
In Part Two of this post, I will expose another problem at the Vault.
(Visited 48 times)
Comments (42)

42 Replies to “The Kelly Vault Can do Better”