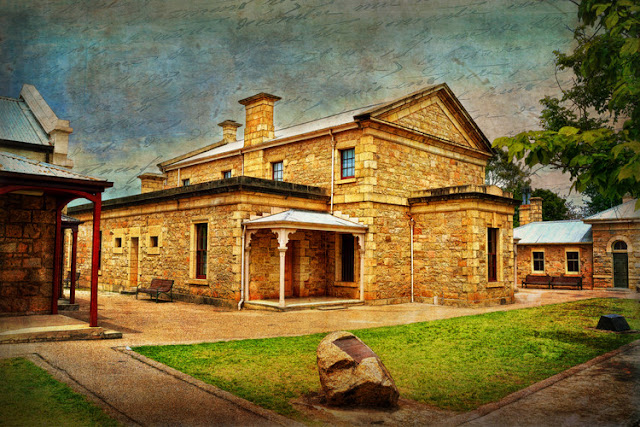 For my money the Best experience in Beechworth is at the Courthouse. There, instead of just looking at things behind glass that relate to the Kelly story, in the Courthouse you can TOUCH the very timber that Neds hands would have touched, stand EXACTLY where he stood and see EXACTLY what he would have seen;you can sit on the very seat where Redmond Barry sat, not just look at it or read about it but sit on it and lift up the lid of the desk in front of you. Whats more, Kelly myths are not presented there as facts, and you know for sure that this place is the real thing.

The Gaol is just up the road and the outside is very impressive. The Tour is ‘self- guided’ meaning they give you an info sheet and you explore it at your leisure, following a line painted on the floor. Inside the lack of maintenance is obvious, you find empty coffee cups and odd bits of rubbish hidden away in corners and the atmosphere is one of neglect and abandonment. The Cells, including the one said to have held Ned had alterations such as modern looking toilets  and lighting which wouldn’t have been there in 1880 and so I didnt feel a sense of “Ned” in there at all. (But you DO get that sense at the Old Melbourne gaol where Ned was hanged and where things seem much closer to their original configuration.) 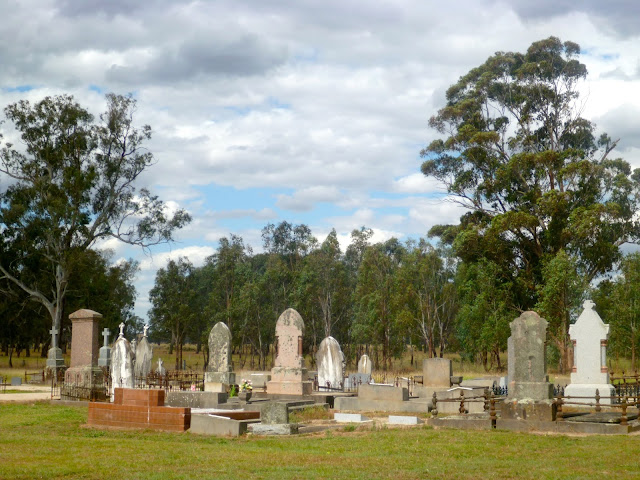 I drove from there along narrow country roads and quite wonderful rural scenery to the Cemetry at Greta. I was completely on my own there, and it was a strange feeling to look among the gravestones of unremarkable people, and wonder which of the bare  patches in one corner, was the ‘unmarked’ grave of the remarkable Ned Kelly….Why I wondered, even in his home town is there nobody willing to mark his burial site and protect it? Instead they have this: 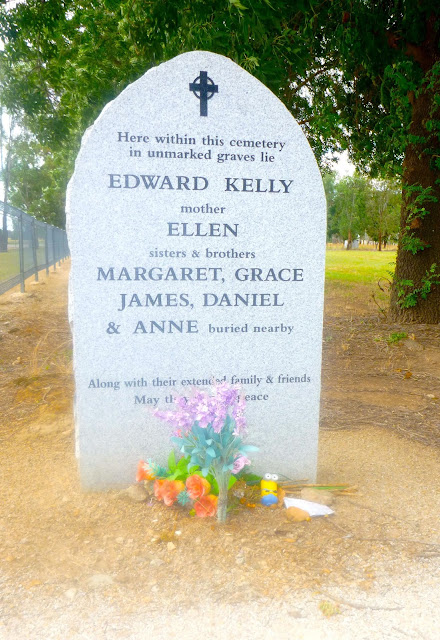 Glenrowan was the other place that I spent some time exploring. I was disappointed to get there too late to see the animated Theme Park Kelly story which I read lasts 40 minutes and ends with Neds resurrection! Maybe someone who has seen it could write a review for us! However , two other Kelly museums were open, and looked as if they were struggling to make ends meet by selling Ned souvenirs and modest entry fees to their collections of Kelly-era memorabilia. The displays are all dated and dusty, but still interesting, as was the bearded and garrulous host at one of them, a fellow who told me Dan and Steve survived the fire at the Inn by retreating to a Cellar, and one of them is buried in Queensland somewhere. He said the two unrecognisable bodies raked out of the burned ruins of the Glenrowan Inn were two innocent passersby who had passed out drunk in the Inn before the Gang took it over. He also said theres a couple of dozen other suits of armour hidden somewhere nearby, and the  Americans have a secret six story underground research Center next to a Nuclear Missile Silo in the Tanami Desert ….I bought a little tin of Outlaw Mints off him and headed for the Siege site over the railway bridge. 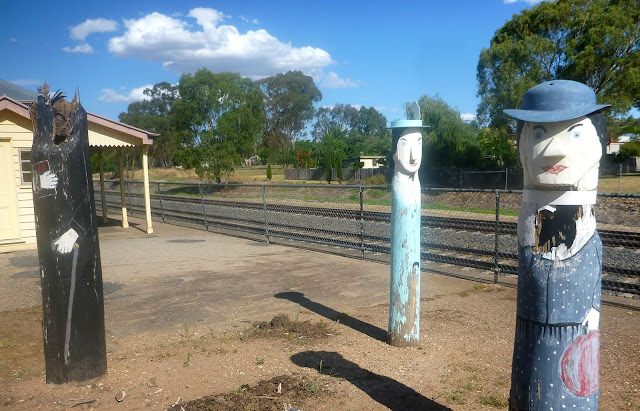 Peering through the windows of the replica Station, you see a dusty uncared for room with junk lying around, and the life size wooden figures outside, representing some of the people there at the time of the siege are rotten, their paint is faded and they are falling apart. The priests head has disintegrated. The site of Ann Jones Inn is marked by that familiar Billboard, but the land itself is a horse paddock, fenced off.  Nearby, the site of Neds capture is marked by a jumble of tree trunks with a curious rusty helmeted Ned figure looking like an amputee
collapsed between them. Theres a sense of  defeat and sadness about it. 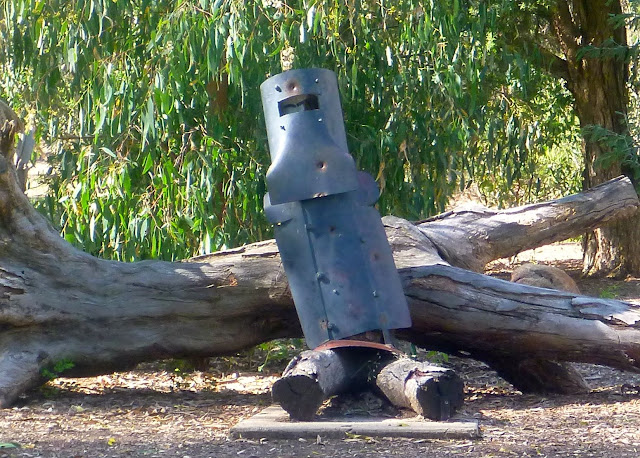 Walking back across the bridge I realised that interest in Ned Kelly, so obvious in Beechworth is actually shrinking elsewhere in Kelly Country. At Glenrowan theres a huge statue of a gun-toting Ned outside the Post Office but all the other sites and tributes seem to be decaying, struggling to survive. Thinking about the difference between Beechworth and everywhere else I wondered if Neds apparent  popularity in Beechworth is  more to do with the popularity and beauty of Beechworth as an historic site in its own right, rather than Kelly himself. The Vault claims big numbers of visitors, but Glenrowan seemed deserted, disengaged and a  bit weird – Ned Kelly resurrection, Nuclear Silos, headless priest… Greta was also deserted and theres nothing much in Euroa.

Notwithstanding the success of the Vault – which strategically but in my view inaccurately – proclaims its neutrality about Ned, the reality on the  ground in Kelly Country seems to be that Ned Kelly mythology is in retreat. Its certainly true that Kelly Mythology is on the retreat in Cyberspace, with this blog about Ned but not about Mythology being THE most active Kelly Place on the internet by a country mile. Iron Outlaw and Kelly Forum web pages are dead with the record Lowest number of letters posted to IO (15) and on the NKF, five of its eight Forum places have had no activity at all for at least six months, and nobody has ventured into their two secret Members Only forums for over a year. Their respective Facebook pages are visited by lightweights interested in trivia. Theyre trying to stop their members interacting with this Blog, whilst visiting here secretly themselves, but as is apparent by Brian McDonlads behaviour, and the plunging participation rates all they’re achieving is to drive people away.

In the real world, even the  Ned Kelly Weekend in Beechworth  is under threat, with the group that organises it declaring on its Facebook Page that this year, if it happens at all, there will be less emphasis on Ned Kelly and more on the many other diverse facets of Beechworths colonial history. This will be a victory for the majority of us, who are sick and tired of Kelly Mythology and the ignorant people who promote it, and are excited by History,  the colourful Colonial past of Australia and the way Science and passion can continue to enlighten us. Ned Kelly and the outbreak will always be an extraordinary and tragic part of the history of that area, and nobody would want to try to expunge it from the collective memory or the history books, but I think I can see the day coming when Kelly will be remembered as a flawed, fascinating flamboyant but violent criminal and not an Icon to be set on a pedestal. He was not a hero – he was a villain who left behind a trail of many dead innocent victims  who must never be forgotten.

Kelly Country is a remarkable and throughly worthwhile place to Visit, and for Kelly buffs theres an even greater interest and fascination.Highly Recommended.

40 Replies to “The Rest of my Kelly Country Tour”