“The notion that any political agenda would justify the killing of innocent people like this is something that is beyond the pale.”
So said President Obama last night ( March 22nd 2016) when discussing the terrorist attacks yesterday in Belgium. No-one is posting pictures of the dead, but the ones below of survivors should remind Kelly sympathisers of exactly what it was that Ned Kelly wanted to see in  Glenrowan. 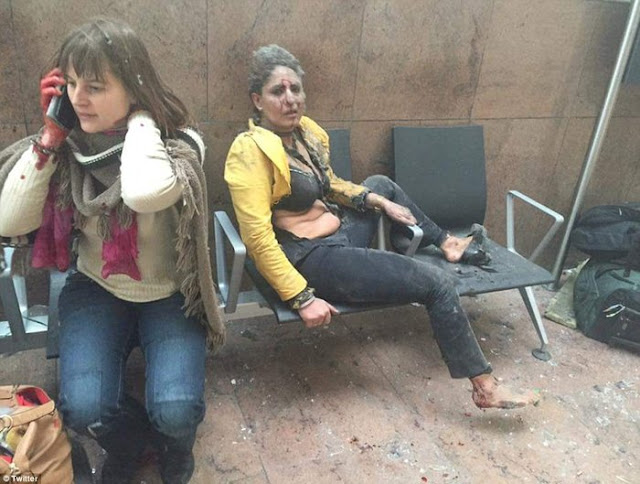 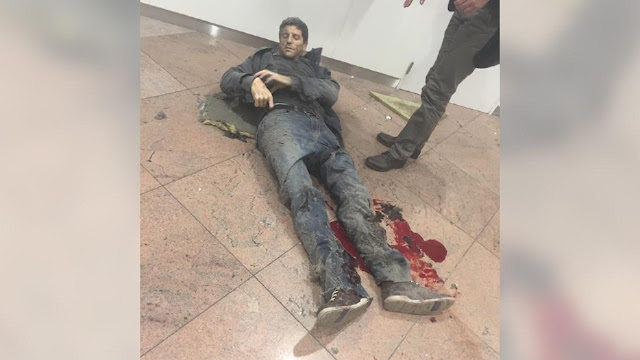 Both these men planned violent acts of protest involving guns, murder and explosives. Both had grievances that seemed real enough to themselves, and perhaps in part might have been legitimate. Both stood up for what they believed in, were prepared to fight for what they thought was right, and both planned to directly confront what they regarded to be corrupt Authority.  One of them planned to attack members of the Armed forces at a Defence Establishment in New South Wales. The other planned to attack and kill Police on a train in Victoria. One of them killed several people and by his actions a  number of others died. The other never actually killed or even hurt anyone – but he was found guilty because he was planning to!  In Australia today though most people regard both of these men as criminals and enemies of society, some regard one of them as a hero and an icon. Could anything be more ridiculous? They are  both the enemies of decent society, two peas in a pod, and both are deserving of our utmost condemnation.

Ned Kelly planned to use the murder of an innocent man to lure Police into a trap, in which many would die in a train wreck, and survivors would be killed by a gang in armour. He was hanged for an unrelated killing.

Abu Hamza, an Australian citizen, was sentenced to 20 years in an Australian prison because he was planning an attack on an unnamed Sydney “Defence Installation”. He was the first person to be convicted under new provisions of the Criminal Code which made it a crime not only to commit acts of terror but to plan them:

Its pretty clear from these definitions that what Ned Kelly planned for Glenrowan, was an act of what is now recognised as ‘Terrorism’ : the cold blooded murder of an innocent man to provoke a Police response, ripping up railway tracks,  endangering peoples lives by taking them hostage, being in possession of dynamite, guns ammunition and armour, and planning to wreck a train to kill Police and any survivors. Its no defence to say that back then there was no such word as terrorism – now we know what it was, and we have a name for it. We also have a name for the person planning such outrages against society : Terrorist. The difference between a terrorist and a bushranger, made clear by these definitions, is that the Bushranger is not acting to advance a political agenda or intending in any way to influence the Government at any level. The Bushranger was simply trying to make a living by highway and other forms of robbery.

Fortunately what actually happened at Glenrowan was a near complete failure of Ned Kellys terrorist plans for the train and the Police. He successfully murdered Aaron Sherritt, the easiest thing in the world for armed thugs against a defenceless victim at his front door in the night – nothing heroic there! – but after that his plan unravelled into utter failure. However  failure doesn’t make the plotter any less a terrorist, or his plans any less an outrage.

Because of Thomas Curnows bravery the violence and  hate  that occupied Neds mind was never made entirely manifest. However it WAS expressed quite graphically in the Jerilderie Letter. There, blood curdling threats to kill and to torture and to seek revenge are set out in page after page of angry defiant outburst. Its fashionable to laugh these words off as the colourful hyperbole of an Irish larrikin with the gift of the gab, but if Ned Kellys plans for Glenrowan had proceeded as he intended, those words would have accurately described what happened : ‘But if I hear any more of it I will not exactly show them what cold blooded murder is but wholesale and retail slaughter something different to shooting three troopers in self defence and robbing a bank’

Thanks to Curnow, Ned Kellys planned acts of ‘wholesale and retail slaughter’ at the site of the intended train wreck never became a reality and it became possible for sympathisers to pretend those plans and those thoughts were never there in the first place. But as was demonstrated with Abu Hamza, who never harmed even a fly, a terrorist is defined by his motivations and by what he plans and prepares to carry out against society, not by how successful he might be in carrying them out. And so it is with Ned Kelly – his intent, and his preparations and plans by themselves define him as a terrorist.  We should no more accept as mitigation the idea that Kelly was a poor selector fighting for a republic and therefore was not a terrorist than we would accept a claim by Abu Hamza that he was a freedom fighter.  Ian Jones was absolutely correct to describe Neds plans for Glenrowan as ‘mad’ – and by this I am sure he didnt mean just a little bit silly but close to ‘insane’, the work of a person losing touch with reality, a psychopath. And  just as the Court decided on the basis of the incriminating evidence in his possession when arrested that Abu Hamza was a terrorist, so Ned Kelly must also be regarded as a terrorist, albeit a failed one like Abu Hamza.

This unpleasant reality is something Kelly sympathisers refuse to face. If they talk about Glenrowan they focus on what the Police did, or on how the hostages were supposed to have played games and danced at the Inn, or how brave Ned was to stand there in his armour fighting them all singlehandedly.  Ive searched the entire Ned  Kelly Forum for discussions about Glenrowan and the only things I found were discussions of books about Glenrowan , and three Posts on June 28th 2014 expressing sympathy for Ned Dan Steve and Joe on the anniversary of the siege. Sympathy for the terrorists!

When are they going to accept the awful truth about Glenrowan that it exposed what was really inside Ned Kellys mind, an angry and violent desire to rain death and destruction on the Police? When are they going to cast  aside the myth that it was a heroic ‘Last Stand’ and accept it was supposed to have been an act of terrorist mass slaughter?  When are they going to accept that if Ned Kelly had succeeded at Glenrowan their fanciful legend would have been still-born, that in its place Kelly would only be remembered as a violent serial killer, a mass murderer, a 19th Century terrorist,  and his Jerilderie Letter seen as a bloodthirsty and chilling forecast of what was to come? When are they going to stop pretending to themselves that Kelly was trying to establish the Republic of NE Victoria, and that this somehow turns him into some sort of revolutionary and a hero, and renders his murderous intent somehow less evil? There is no evidence for the republic but masses of evidence of Ned Kellys desire for revenge and to kill.

Any person who plans and carries out an attempt at mass killing can only ever be utterly condemned. The excuses made for Ned Kelly are ridiculous. He was NOT picked on and persecuted, he was NOT a Police made criminal, he was NOT Australias Robin Hood, he was NOT a revolutionary and he was NOT a hero. Whatever he may have been as a kid, whatever sympathy you might have for his origins and for whatever influenced him, by the last few years of his life he had become a violent angry and murderous criminal whose focus became the Police.


The great irony of Kelly mythology is that it only exists because Ned Kellys  ‘colonial stratagem’ failed, and because sympathisers are in deep denial about what Ned Kelly exposed of his true nature at Glenrowan. The last thing they will want to do is discuss it here.

106 Replies to “Ned Kelly wasn’t a Bushranger: he was a Terrorist”