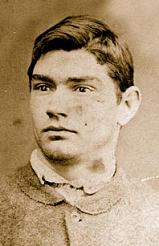 Now, with  easy access to the news report made only a few days after the event, and exposure of the truth of what actually happened we can see how the  telling and retelling of the story over the intervening 50 years has changed it from a silly mischievous prank that inconvenienced several people and wasted Police time and resources, into an act of absurd Police persecution of two innocent boys. The Kelly myth is a comprehensive misrepresentation of the truth.
The reality in relation to Jim Kellys first brush with the Law is that it has none of the appearance of being an example of unwarranted Police persecution of two innocent Kelly family members, which is how the Kelly legends portray it. In fact when you read the original source material, this incident appears to be a perfectly legitimate and sensibly handled response to some foolish behavior by a couple of wayward kids. Jims first interaction with the Law was NOT an example of intrusive Police harassment. Another Kelly myth is debunked.
And as this news report details, kids like that and incidents like that are still happening today:
A 12 year old girl has been detected driving at 122kmh on Illawarra Main Road in the State’s north.(Tasmania, 2015) On Saturday night at 10.37pm, police allegedly detected a speeding vehicle travelling at 122km/h on Illawarra Road. The vehicle was intercepted on Youl Road, Perth, and police were shocked to discover the driver was a 12 year old girl. A 21 year old man and a 16 year old girl were passengers in the vehicle. The girl was charged and bailed for false name and driving offences. Sgt Phil Summers, of Westbury Police station, said police were stunned.
(Visited 120 times)
Comments (11)