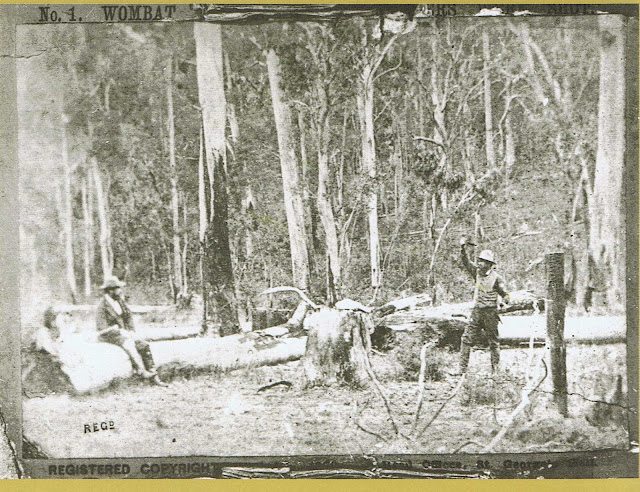 Just so that everyone understands why I keep calling the CSI Report Pseudoscience, I will illustrate the weakness of their argument where it relates to this Photograph, one of the two famous photographs of the actual place where Lonigan and Scanlan were killed, at the site of the Police encampment at Stringybark Creek. This extraordinary photo was taken by the photographer Frederick Charles  Burman less than a week after the police were murdered there. Burman was taken there by Edward Monk, a local sawmiller with extensive knowledge of the surrounding terrain. Monk was part of the search party, which included the surviving policeman McIntyre  that found the bodies of the slain Police. Monk therefore knew exactly where the bodies were, and no doubt from his discussions with McIntyre, exactly what happened up there and he took Burman back  to photograph the scene. As you can see Burman re-created the scene, no doubt with Monks help and the descriptions of McIntyre, showing someone pretending to be Ned Kelly crouched behind the log on the left, someone pretending to be McIntyre sitting on the log to the left of ‘Kelly’ and Kennedy with arm raised advancing into the campsite, moments before being shot.
The CSI teams argument rests crucially on their understanding of this photo, because in it they believe they can see a mark on a tree which they claim enables them to identify the exact same tree in another photo, a tree with the exact same mark on it (they call it a ‘burl’) in the so-called Beautiful Mansfield Photo. Therefore they argue, this scene in the Burman photo is of the same place, or very close to the same place pictured in the Beautiful Mansfield Photo.

Here’s the massive problem that they have to explain to sustain their argument : they go into great detail to establish that the Mansfield photo was taken looking to the north-east. To see the same ‘burl’ on the same tree in the Burman photo they have to therefore insist that the Burman photo was also taken looking to the north-east. This would then require us to accept that when Monk and Burman recreated the scene for the Camera, aiming it to the northeast, they got it completely arse-about-face’ with ‘Kelly’ hiding on the wrong side of the Log, ‘MacIntyre’ facing south when he should have been looking north, and the arriving Kennedy walking into the Camp from the south, when we know he approached from the North.  And that is what the CSI team claim, that Burman got it completely wrong, by 180 degrees. So, I ask how likely is it that Burman and Monk, having seen the bodies and hearing McIntyres account, got it completely wrong, just a few days after the shooting took place but the CSI team got it right, all these decades later?
And how exactly have the CSI team determined that the Burman photo was taken looking north-east? What evidence do they have that Burman took the photo from somewhere near where the police tent was? The answer is that there is NO indication anywhere recorded about exactly where the picture was taken from, but to make their ‘matching burls’ argument stick together they HAVE to suppose that Burman took the photo from somewhere near where the tent had been in the northwest corner of the clearing. This then FORCES them into the absurd position of having to assert that Burman and Monk got it all wrong.
See what they’ve done? They’ve decided to make an argument about these ridiculous ‘burls’ – which are indistinct in both photos and nowhere near identical as they claim – and to make the burl argument stick they’ve forced everything else round to fit. That’s Pseudoscience – where you make a theory and then twist everything else round however much you need, to  fit your theory. BAD, BAD BAD!
To accept the CSI theory, you have to accept that Burman and Monk didn’t know what the hell they were doing. You also have to accept that two indistinct smudges on trees are identical burls in the same tree many years apart. If you can’t accept both of  those two highly unlikely claims, the CSI argument collapses and all the other stuff in their Report becomes irrelevant.
(Visited 98 times)
Comments (5)

5 Replies to “CSI Pseudoscience : Exhibit ONE”