In the Preface to the 2014 CSIRO publication “Ned Kelly Under the Microscope”, the Editor Craig Cormick asks “Do we really need another Ned Kelly book?”
Cormick is a Kelly sympathiser and apologist who believes Kelly made a heroic stand against injustice, but he nevertheless managed to assemble a very worthwhile contribution to the bloated and ever expanding mass of publications about Ned Kelly. He answers his own question by saying “As long as it has something new to say, then ‘Yes, we do’ ” and his work amply filled that criterion – it did indeed have a lot to say that was new.  However I think he needed to qualify that answer by suggesting that the ‘something new’ needed to be something significant and it needed to be worth saying. The problem with the Kelly literature is that it in recent years many  Kelly enthusiasts have published stuff  that  may have been ‘new’ but only ‘new’ in some trivial way – and very little has been significant, or worth saying. “Ned Kelly : The Iron Outlaw”, published a few months ago  is a case in point – it says almost nothing new, and definitely nothing new that is important or worth saying , so by Cormicks criterion, it wasn’t something anyone needed. It’s a waste of space. It was just an ego boost for its brainwashed author (My Review of that book is HERE )
The latest addition to the Kelly literature is Jack Petersons “An Introduction to Ned Kelly : A pictorial history of an Australian Outlaw”. It’s a self published work of 100 pages available from Amazon. The link Peterson provides on his webpage takes you to the American site  where you can purchase it as a 20 cm square paperback for $37.16.  but if you search for it on the Australian Amazon site (amazon.com.au) you can get it as a download to your Kindle or e-reader for $3.99. The author, a self taught amateur describes himself as a Kelly enthusiast who has has spent “a lifetime researching, exploring, and photographing the country, relics, and structures that are relevant in demonstrating the historical significance of Ned Kelly’s life and the legendary status he is known for in Australia.”
So does this latest publication have something to offer the Kelly world that’s not just ‘new’, but also important and worth saying? Well firstly, Petersons idea to produce a ‘pictorial’ history is not exactly new. For about the same price as Petersons book, from Abe books you can still get a copy of Keith McMenomy’s  “Ned Kelly : The Authentic Illustrated History”, which is the grandfather of all Kelly pictorial histories,  an immensely valuable landmark publication from 1984. There is also the scholarly and very beautiful “Kelly Country : A Photographic Journey” by Kelson and McQuilton, 2001. 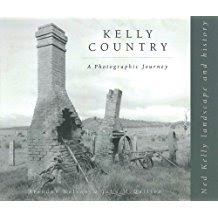 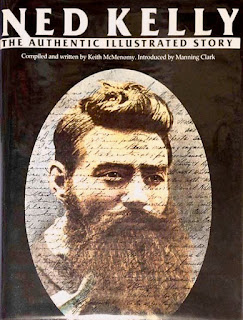 48 Replies to “Book Review : “An Introduction to Ned Kelly” by Jack Peterson”