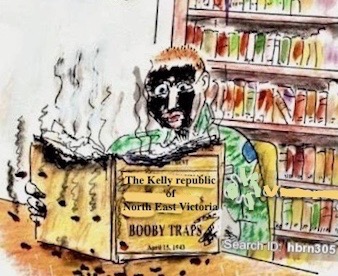 This year one of the subjects I am going to keep returning to is Stuart Dawsons free publication from last year, Ned Kelly and the Myth of a Republic of North Eastern Victoria. (If you havent read it, get your free copy by clicking on the image to the right) I said on this Blog in my review of the 2018 Kelly calendar that this publication was by far the most important of the year. In fact, without doubt it was not just the most important publication, but the most important event of any kind in the Kelly world in at last the last five years. Anyone who disagrees with that assertion is welcome to nominate what they consider was a more significant event, and why in the comments at the end of this post – I predict nobody will.

The reason I am going to keep talking about it is that the implications of Dawson’s findings are too important for the Kelly story to allow them to be forgotten about or ignored and allowed to disappear from view, which of course is what the Kelly apologists, promotors and sympathisers alike would all much prefer.  They don’t want the embarrassing news getting out that the centrepiece of their Kelly idolatry has been debunked, disproven, demolished, fatally damaged, destroyed – call it what you like – but the idea of a Kelly republic of north east Victoria is a myth, a clever invention dreamed up by Ian Jones, and all thats left is criminality.

The truth is that if Dawson is right, the man they venerate was not a god, he was not a revolutionary or even a good man but a smooth, charming but notoriously violent criminal, a shameless liar, a multiple murderer, and the best explanation of why he was such a person is that most probably, he was a psychopath. The shattering truth they still refuse to acknowledge is that if Dawson is right, then they venerate a psychopath and the Kelly Legend is dead. And much as they would wish to deny it, that is the choice Ian Jones has left them with : Kelly Republic or criminal! But the republic is now as dead as flat earth theory, as dead as the sciences of alchemy and phrenology, as dead as the Dodo, and in that light their continuing veneration and hero-worship looks kind of creepy.

Of course, it hardly needs to be said that this all hinges on Dawson being right!

Well, for some reason so far no substantive attempt at a refutation has emerged from anywhere, and frankly, given the comprehensive nature of Dawsons deconstruction its very hard to imagine one ever will. The Kelly mobs excuse for not taking Morrissey’s latest works seriously was that there were almost no references in it, but Dawson’s paper is comprehensive and exhaustively cross-referenced so what is their excuse now? In fact, I think they can easily see that his argument is almost untouchable, and so out of fear they refuse to go anywhere near it. The nearest thing to a response to it – other than the usual stream of disgraceful personal insults we have become used to receiving from Kelly toadies – came from Steve Jager, the amateur self-proclaimed Kelly historian and “historical consultant”. He responded by reposting irrelevant stuff he had gathered long before Dawson wrote his paper, didn’t address a single one of the challenges raised by Dawson and yet considered he had somehow produced a refutation of it. Jager, and everybody else in the Kelly camp dont seem to understand that to refute something you have to address the authors actual arguments and refute them one by one –  something no sympathiser, Jager included, has yet to attempt. However, Jager plans to deliver a speech on the topic at the Chiltern Seminar in April, so maybe he will try again but I doubt it – he’s no academic! My bet is that he will simply recycle the same irrelevant junk, once  again ignore the substance of Dawson’s paper except to ridicule it,  and will again fail to directly address let alone refute even the least of Dawson’s arguments. No doubt he will be applauded by the wilfully gullible uncritical Kelly groupies who are desperate for Dawson to be wrong, and will continue to cling to an absurd hope that one day something will appear to miraculously resurrect their dead buried and cremated Republic. But if Jager has something new to say I will be stunned. If he has something new to say I will happily post an unedited complete transcript of his talk here, if he makes one available, but somehow, I doubt he would be brave enough to allow his thoughts to be scrutinised by anyone other than confirmed Kelly apologists.

There is however possibly one further somewhat oblique attempt at an answer to Dawson’s paper in the pipeline. This will be in the form of a soon to be released novelisation of the script written for the ‘Glenrowan’ movie by Matthew Holmes and Aidan Phelan. Ominously, Steve Jager is listed as the ‘Historical Consultant’ to this movie. Phelan says on a video post to his Bushranger webpage that “we found that the plan at Glenrowan was far too meticulous to be just some pointless mass murder, especially when you consider that its so far in opposition to the strict moral code of the person devising it”. According to the Synopsis provided on the movies website the gangs goal at Glenrowan was “to derail a train of policemen and start a revolution”.

In the past Holmes and Phelan have insisted that their bushranger movies were to be entirely based on “historical evidence and facts rather than a novel or opinion” so I will be intrigued to hear from them what facts and what evidence they have that the Kelly Gang was meticulously planning a ‘revolution’, and exactly what kind of revolution it was going to be.  Such evidence could of course be a direct challenge to Dawson’s conclusions. However, to avoid having to supply that evidence the trick they are employing is to release their claims in the form of a ‘novel’, in which anything can be asserted without the need, as in genuine non-fiction, to back up claims with evidence, references, or sources. So, as I keep reminding everyone, anything asserted without evidence can be dismissed without evidence. I await this publication with interest.

As for Holmes and Phelans preposterous assertion that the person devising the planned mass murder at Glenrowan – Ned Kelly – was bound by a “strict moral code” – I can only shake my head! This mans ‘strict moral code’ allowed him to become a notorious liar who took pride in being an unconvicted ‘wholesale and retail’ horse and cattle thief, led him to convictions and imprisonment for indecency, assault and murder, and he never once expressed a single word of regret for his murders of policemen or for other actions of his that resulted in the imprisonment of his mother,  or for the death of his brother and several friends and other innocent bystanders. I wonder what the hell a lax moral code would look like to Holmes and Phelan if they think Ned Kellys was ‘strict’?

The deeply ironic fact, something which I think is entirely lost on the sympathisers, is that  the architect of the republic myth himself, Mr Ian Jones was the one who developed the idea and repeatedly insisted that without a republic Ned Kelly could only have been a criminal. Its an extraordinary irony that even as he was building the case for a Republic, and creating a name for himself as the great Kelly advocate adored by all Kelly sympathisers to this day, Jones was stitching into its fabric the seeds of its own destruction, the fatal flaw.

Jones in ‘A Short Life’ wrote: “The Glenrowan campaign is inexplicable without the central carefully obscured fact of the republic”. At another place Jones described the Glenrowan Campaign as ‘madness’ unless it was part of a fight to establish some sort of new political order – he went so far as to say that if Glenrowan wasn’t ‘an act of war’, then it would be ‘simply mass murder’. In 1992 he wrote of Glenrowan that it “demanded some such rationale or it would be seen simply as a criminal atrocity of monstrous scale” (FF156)

The other irony is that for most of its life, the Kelly myth, as expounded for example by Kenneally and Brown, had nothing in it about the Kelly Republic of north east Victoria, which as Dawson showed is almost entirely an invention of Ian Jones.  What Jones did was demolish the old version because according to him it couldn’t be understood except through the lens of a republic – but now that the republic has been demolished, what is left for the Kelly sympathisers to go back to? According to Jones all that’s left is “a criminal atrocity of monstrous scale”.

One last message to anyone who thinks their families ‘oral history’ will get you out of the mess you’re in, and save your precious Republic. Your  first massive hurdle is to explain why no such oral history existed in 1929 when Kenneally wrote “The COMPLETE Inner history of the Kelly Gang”. Not only was Kenneally a well connected extreme sympathiser,  but he listed old Tom Lloyd, the so-called fifth member of the Kelly gang as his primary informant and therefore would have known of and included in his book every last rumour that elevated the Kelly Gang. But even Tom Lloyd had never heard of such a plot, and so Kenneallys book says absolutely nothing about a republic of north east Victoria, or for that matter the ‘revolution’ hinted at by Holmes and Phelan: absolutely nothing! Not a single word!

The information given to Ian Jones  some 30 years later about such a plot by Tom Lloyds son was made up to amuse Ian Jones – and Tom junior admitted that to Doug Morrissey! It was a hoax!

But if that isn’t enough, even the Kellys themselves did not have a family oral history of a republic – we know this because Jim Kelly endorsed Kenneally’s book saying ‘Through your book the people of Australia are in full possession of the truth’ and James Ryan, a cousin of Ned Kelly also wrote to Mr Kenneally and said “Your book is indeed complete”. If the massive central theme of a republic had been part of the Kelly plan, these two would have known about it and would have seen a huge hole in Kenneallys narrative – but they didnt! Instead they said it was ‘complete’ and Australia was ‘in FULL possession of the truth’

So, if  even  the Kelly family didnt have an oral history of a republic in 1929, I cant see how anyone elses family would, let alone the family of your neighbours friends grandmother who passed in the north east last century some time! I know its hard to imagine that the stories you’ve believed for years might be wrong, and even harder to dump them but if theyre about a Kelly republic they ARE wrong, and you should dump them if you want to be able to say that what you believe about the Kelly outbreak are the facts and not the fantasies.