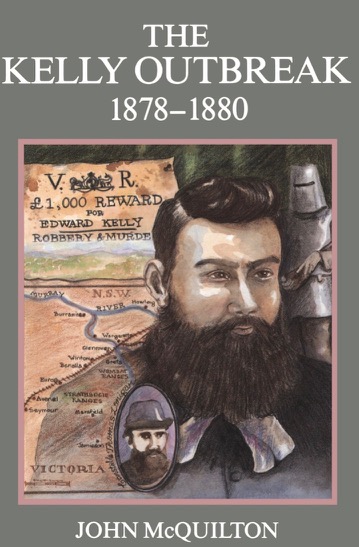 Last week I wrote about John McQuiltons contribution to ‘Outlawed : the Real Ned Kelly’ a 2003 ABC documentary that can easily be found and watched on You Tube. Its been watched over 80,000 times in five years. What I showed last week was that John McQuiltons contribution was wildly partisan and in places demonstrably false, and I repeatedly asked the question“How can ordinary readers be expected to have an accurate grasp of Kelly history when the supposed professional Kelly Historians are leading them astray?” Its bad enough that rank amateur Kelly fanatics write demonstrable rubbish on Facebook– but their nonsense is read by almost nobody. On the other hand people take note of professors of history so if you’re a professor, and you’re on an ABC TV documentary you have a vastly wider audience and a correspondingly much greater responsibility to get your facts right, and be as certain as you can that your opinions are based on evidence and not on misrepresentations of the facts. But it seems when it comes to Australian history professors and Ned Kelly, that’s not how it works. Who can forget Professor John Molony telling viewers of his National Portrait Gallery lecture that Fitzpatrick raped Kate Kelly? A false and absolutely unfounded and sickening allegation that even Ned Kelly denied – but if a professor claims it, why wouldn’t anyone believe it?

Unsurprisingly, though many of Kelly fanatics will have read what I wrote last week none has uttered a single word of criticism of McQuiltons clearly false narrative, or for that matter of my critique. On the other hand, on their sites they’ve criticised a hat worn by an actor in a promo shot for the yet to be released ‘Stringybark’ movie, such is the intensity of their predetermined opposition to a movie that is claimed to be telling the truth about Stringybark Creek. They pretend to be interested in accuracy and so they’re up in arms about something as trivial as a hat – but when it comes to big important mistakes they’re not interested if the mistakes favour their pet Kelly fables!

So, no doubt they will read this weeks post and keep silent about it as well, because this week I am going to expose some of the dodgy scholarship in Professor McQuilton’s  famous book ‘The Kelly Outbreak’ ( shown above ). In particular, I will concentrate on Chapter Four, wherein  he developed  and promoted the Kelly claims about police persecution, one of the major themes of Kelly mythology. Anyone who has a copy should read it again. Its actually a really interesting and important book, but it contains some major  flaws.

McQuilton claims in Chapter Four that the Royal Commission found pure criminality to be ‘inadequate’ as an explanation for the Outbreak, and goes on to make the case for  ‘an alternative explanation (that) had been widely circulated and believed in the North East. The Quinn clan in general and the Kelly family in particular had been the victims of unnecessary police harassment that had become persecution. Stringybark Creek was tragic and deplorable, but it was also the inevitable result of heavy handed police attention paid to the Kellys’.

If you hadn’t noticed it, what McQuilton is saying here is extreme : to say the murders of Lonigan Scanlan and Kennedy were ‘inevitable’ is almost to absolve the perpetrators of responsibility for them, and to blame the ‘heavy handed police’ for the triple murders at SBC is  obscene, unless it were true! But what McQuilton  is suggesting is not impossible : even today victims of domestic violence who murder their spouses have often been dealt with sympathetically by the courts, once the full horror of the violence and abuse they have been subjected to is made known. It is in fact possible that extreme Police persecution could eventually provoke a violent reaction that ended in police deaths , whether intended our not.

The task then for McQuilton – and for Ned Kelly and the Kelly apologists in general –  having made such an extraordinary allegation, is to supply the extraordinary evidence to back it up : show us the full horror of the violence and the abuse that the Kellys were subjected to.

McQuiltons  first hurdle is the Royal Commission. McQuilton claims an alternative view to criminality is required – and he nominates police persecution  as that alternative explanation – because, according to him the Inquiry found pure criminality to be ‘inadequate’ as an explanation for the outbreak. But thats not really true – in fact its a misrepresentation of what the Commission believed. The Commissions view was that the outbreak DID largely result from criminality, saying it arose out of ‘the unchecked aggregation of a large class of criminals in the North East’ . But the Commission didn’t see criminality as the entire or complete explanation for the Outbreak, saying that it was ‘exacerbated by the weakening of District policing by the removal of the Glenmore Police station, reductions in the number of Police and the employment of ‘inexperienced and inferior constables’.

Saying it was more than criminality is not the same as saying that criminality was ‘inadequate’ as an explanation. What the Commission believed was that the outbreak was essentially criminal in its origins but that it may not have happened, or been less of a problem if policing had been better.

Not only that, the Commission specifically REJECTED the suggestion McQuilton is trying to advance as an alternative explanation, the claim that the Kellys were the victims of police harassment and persecution, which is McQuiltons second big hurdle :

“It may also be mentioned that the charge of persecution of the family by the members of the police force has been frequently urged in extenuation of the crimes of the outlaws; but, after careful examination, your Commissioners have arrived at the conclusion that the police, in their dealings with the Kellys and their relations, were simply desirous of discharging their duty conscientiously; and that no evidence has been adduced to support the allegation that either the outlaws or their friends were subjected to persecution or unnecessary annoyance at the hands of the police.’

Ive read elsewhere an opinion that the Commissions inability to find evidence to support claims of Kelly persecution doesn’t mean that it didn’t exist : the absence of evidence isnt evidence of absence! So maybe if the Commissioners had looked a lot harder and for a lot longer they would have found it. Fair point.

But here’s why I reject that argument.

Firstly, finding the cause of the outbreak was the main purpose of the Commission, not an incidental interest they commented on in a footnote. In their search for causes they interviewed over 60 people and asked over 18,000 questions. They travelled to the North East and inspected the region, and interviewed Mrs Kelly. Nobody can claim their search was superficial or cursory – it was intense and prolonged and exhaustive, and their conclusions were far from ambiguous or hesitant. They were harsh in their criticism of police, demonstrating they weren’t afraid to ruffle feathers or reach critical conclusions. But their conclusion was not that the evidence of police persecution was weak, or that the persecution was minor, but that there was NO evidence of it ever having taken place at all. According to the commission it didn’t happen. There was no evidence. None! And they had made a thorough search for it.

Secondly, the claim was not for something subtle, something that could be easily missed or overlooked – McQuiltons  claim was for persecution and harassment that was so gross as to make a triple  police killing ‘inevitable’, almost understandable, almost justified. It was for harassment and persecution that was so unjust and so unfair that it provoked not only three police murders but two bank robberies, manufacture of armour, the murder of Aaron Sherrit,  a planned police massacre at Glenrowan, and in the eyes of McQuilton and others an attempt to overthrow the entire regional governance and found a Republic. If such outrageous behaviours and such grand plans were a response to a stimulus such as persecution, as is claimed, the stimulus couldn’t have been trivial. If there was persecution sufficient to provoke all the violence and chaos that Kelly and the Kelly gang created, then it would have been visible, it would have been big, it would have been obvious and it would have been easy to find. But the commission made an exhaustive and thorough search and found none.

The reasonable person would therefore conclude that it didn’t happen.  There was no persecution. Clinging to a hope that maybe it existed but the Commission couldn’t find it is absurd and desperate.

However, as is typical of Kelly apologists who cherry pick the Commission for the bits that they like, McQuilton refused to accept their conclusion about persecution and goes on to make his case for police harassment and persecution in some detail in Chapter four, and I will discuss that next week. In the meantime, perhaps the Kelly apologists can outline their conspiracy theories about why the Commission found no persecution.