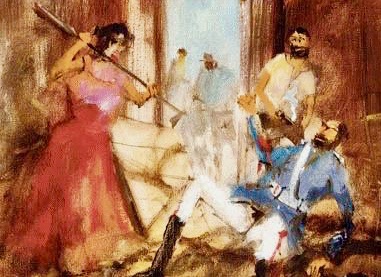 In the Jerilderie Letter Ned Kelly presented his version of the violent debacle at his mothers home at Greta on April 15th1878, the so-called ‘Fitzpatrick Incident’. In brief, Constable Fitzpatrick went to the Kelly home to arrest Dan Kelly but returned without him late at night to the Benalla Police station, saying that Ned Kelly had shot him in the wrist. Kelly followers claim this event triggered the entire outbreak and it was wholly the fault of Constable Fitzpatrick whose description of what happened was a pack of lies. Recently the Kelly conspiracy theorist Alan Crichton has let Fitzpatrick off the hook somewhat, claiming that he was merely a pawn, sent to Greta by shady master manipulators who used him as their unwitting agent of persecution. In fact, many details of the incident are disputed, but one thing that Ned Kelly was clear about was that he had nothing to do with it.

Long before he wrote the Jerilderie Letter he was on the record declaring his innocence, telling some of his hostages at Euroa in December that same year that Fitzpatrick was a liar, and he could prove that he was 15 miles away at the time Fitzpatrick was shot in the wrist. (Argus December 12th 1878.) At Ned Kellys trial in October 1880 another hostage, James Gloster, a draper from Seymour under oath recalled Kelly saying he was not 15 but 200 miles away when Fitzpatrick was shot(Argus 29 October 1880), and Robert Scott, the Bank Manager at Euroa, also under oath, said the same thing.(Argus 30thOctober 1880) However, by February 1879 when the Jerilderie letter was created, Kelly wrote that actually, he wasn’t 15 or 200 but 400 miles away :   “I heard nothing of this transaction until very close on the trial, I then being 400 miles from Greta…..  so I came back to Victoria” (NK Jerilderie Letter) Four hundred miles would put him somewhere near Sydney or Adelaide!

Kellys behaviour, on return, wasn’t what one might expect from someone who was not only claiming to be innocent but who also said he could prove it.  Neither was it what one might expect from someone who claimed so loudly to be incensed at what had happened to his mother and how much she meant to him and how he was going to fight for justice for her. On return, instead of making an attempt to clear his name, to prove his claim to be innocent and to help his mother, who was still waiting trial, he went into hiding with his brother. He claimed he wanted to raise money to pay for her defence and said his gold digging was successful, and that he made money by selling liquor produced on a secret still in the bush.  Later he had even more money after two bank robberies provided several thousand pounds, but here’s the odd thing: Ned Kelly never spent even a penny on a legal defence for his mother. Not one single penny. His claim to be on the high moral ground was all talk and no action:  hot air and lies aimed at fooling people into thinking he cared about his mother : all his actions say otherwise.

At that time, when the Gang was flush with money Joe Byrnes mother bought herself a nice new dress and paid to have her photo taken wearing it, the Kelly girls bought new saddles and paid off all their bills – and all the while Mrs Kelly and her baby were stuck in gaol. Ned Kelly never lifted one finger to help her – unless you believe that Glenrowan wasn’t about a Republic but about taking hostages so he could free his mother from prison. This was in fact one of the several different and confused explanations that Kelly later offered as his motivation for Glenrowan, but if that was his plan you would have to call it really dumb – crazy even – because Mrs Kellys sentence was almost completed by the time of the Glenrowan siege and she was released three months later, in February 1881.

So where exactly was Ned Kelly when Fitzpatrick was shot? Which, if any of his three reported claims is the truth? Did he lie to the hostages about being 15 or 200 miles away or is his claim in the Jerilderie letter a lie? Well, here’s what Kate Kelly told ‘a party of gentlemen travelling overland from Sydney’ as published in The Herald on 7thFebruary 1879 – before the Jerilderie Bank hold up:

“According to her statement she was in her house alone when Fitzpatrick came, and he commenced in a violent manner to behave improperly. Just then her brother Ned came to the door, and caught Fitzpatrick in the act of attempting an outrage, whereupon, he, with the natural instinct of a brother under such circumstances, rushed for his revolver. Fitzpatrick it is said seeing the position of affairs immediately bethought himself of the warrant, which he pulled out and hold up to Ned, saying at the same time, ” I’ve got this for you.” At this moment, Ned Kelly, having seized his revolver, fired, and this was how it came that Fitzpatrick was shot in the wrist.”

Some of these claims by Kate Kelly we know are false, and she wasn’t prepared to make them in court to assist her own mother when she was on trial – we know for example that Fitzpatrick did not have a warrant with him, and we know Fitzpatrick did not behave improperly toward Kate – but why would she falsely implicate her innocent brother in the incident?

Quinn: This Fitzpatrick affair. I believe myself, Fitzpatrick, from what I have heard and can make out, was shot by Ned Kelly.”

Also under oath, during Ned Kellys trial in Melbourne, Senior Constable Kelly described a conversation he had with Ned Kelly immediately after he had been captured at Glenrowan :

“Between 3 and 6 the same morning had another conversation with prisoner in the presence of Constable Ryan. Gave him some milk-and-water. Asked him if Fitzpatrick’s statement was correct. Prisoner said, “Yes, I shot him.”

McIntyre and Steele both said that Ned Kelly had also told them the same thing. And even more compelling proof was provided by  Neds cousin Joe Ryan : Ned Kelly sold him a horse at Greta on that very day and he had the dated receipt  for £17 signed by Ned Kelly to prove it.

Kelly followers love to say that because none of us was there, we can never know for sure what really happened, and in that way they feel justified in clinging to a belief that Ned Kelly told the truth about what happened that night at his mother’s home, that he wasn’t there and that everything that went wrong after that was all Fitzpatrick’s fault.  But if the Jerilderie letter claim is true, then Ned Kelly lied to the hostages at Euroa, he lied to several different police when he said he DID shoot Fitzpatrick, his sister Kate lied when she said he had shot Fitzpatrick, his uncle lied under oath and Ian Jones got it wrong when even he was reluctantly drawn to conclude this : “If Ned had admitted that he shot Fitzpatrick, he would also have given credence to the rest of the troopers evidence and implicated his mother, Skilling and Williamson. So, he lied”

Pathological lying is also a central feature of the psychopathic personality, Australia’s most famous example being the man whose huge statue dominates the Glenrowan streetscape. Stand aside the Big Pineapple, Stand aside the Big Prawn, the Big Marino and the Big Banana : Glenrowan has the Big Psychopath. Why they think he is worth remembering is beyond  me, but I think its because they also have fallen victim to the psychopaths stock-in-trade : lies.

And they think he was a hero.