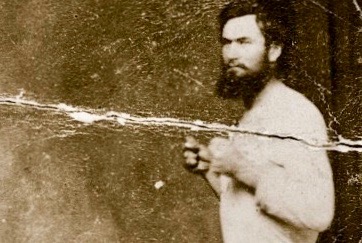 In 1871 an incident occurred in Ned Kellys life that’s most often cited as a proof of the Kellys claim that the police persecuted and harassed them – but it only appears that way if vital facts are left out. This event began when Ned Kelly was arrested and charged with stealing a horse that had been reported missing. For some unexplained reason, Ned Kelly violently resisted arrest, there was a brawl in which the policeman attempted to shoot Ned Kelly as he tried to escape, and after capture the same officer bashed Kelly about the head so brutally that a doctor had to be called to stich up his scalp wounds.  Later it was discovered that when the horse was first reported missing Ned Kelly was still in gaol, so the stealing charge was dropped. However, the fact remained that he was caught in possession of the missing animal.

Eventually, as its told in the old story, Ned Kelly received double the sentence for being in possession of that stolen horse, than did “Wild’ Wright the man who actually stole it. If those were all the facts, it would indeed have been unfair – especially in view of the bashing that Kelly had received at the time of his arrest –  but the ‘old’ story is a misrepresentation of what really happened.

In fact, Wright was convicted of ‘illegally using’ the horse – the illegal but not uncommon practice at the time of using someone’s horse and returning it to its home paddock hopefully before its owner realised it had been taken. This is a much less serious offence than actually stealing it. Ned Kelly on the other hand, after coming into possession of this horse, decided not to return it but to sell it, along with some other stolen horses. These facts came out in the trial, when a friend of the Kelly family, James Murdock, decided to tell the truth about what Ned Kelly had been trying to involve him in. For this more serious crime than illegally using, Kelly was given three years for ‘feloniously receiving’ – bigger crime, bigger time!

In regard to Constable Halls undeniably brutal and wrong treatment of Ned Kelly, there is some additional information that is almost never recounted in the old version, information that doesn’t excuse what he did to Ned Kelly but it might help to explain it, if Kellys unexplained violent resistance to being arrested and attempt to run off aren’t considered sufficient. A few months before this incident, the same Constable Hall had tried to arrest Ned Kellys uncles Jimmy and Patrick Quinn. These two men resisted arrest and escaped by assaulting and almost killing Constable Hall with a stirrup iron, twice rendering him unconscious and deeply wounding his scalp. Hall was therefore well aware of the violent way Kelly associates responded to police.

In any case, this single act of police brutality against Ned Kelly couldn’t be claimed as something that drove Kelly to a life of crime – by this time, Kelly was already a convicted criminal. Nor, in view of all the other concessions and considerations that Ned Kelly had received by other police and by the Courts, could Hall be regarded as in any way representative of police in general.

So, in August 1871, aged 16, Kelly went to Gaol for three years, and in an act that once again doesn’t fit the old story of Kelly persecution and harassment, he was released six months early, in February 1874. Later that year he posed for the famous ‘Boxing Ned’ photo, supposedly to commemorate his victory over Wild Wright, and the settling of old scores at a bare-knuckle fight in Beechworth.

Its claimed that for the next three years Kelly went straight – and in yet one more historical truth that doesn’t fit the old Kelly story of police persecution, during that time when he was said to have been a law-abiding citizen with a regular job, the police took no interest in him..

It was during this time that Kelly and his younger brother Dan began their association with the Greta mob, a band of local youths who engaged in larrikin behaviour which was often antisocial and on occasion crossed into petty criminality around the north east. Several of its members appeared before the courts but were often discharged. Dan Kelly was sentenced to three months hard labour for his role in the assault of a shopkeeper, but charges against Ned Kelly in relation to a missing horse in late 1876 were dropped because the evidence was inconclusive.

Whilst the incident involving Wild Wright and the borrowed horse is the one that’s often cited by his defenders as the one that best shows how Kelly was mistreated, Kelly himself, when asked in an interview in late 1880 for an example of the ‘tyrannical conduct of the police’ that drove him to ‘madness’, the incident he spoke about was something that happened in September 1877, Kellys next brush with law enforcement. This time Kelly had been arrested for being drunk and after a night in the cells was being taken across the street to the Benalla Courthouse when he decided to make a run for it. The Kelly myth makers claim that Ned took off to try to escape the humiliation of being placed in handcuffs for the short walk across the street, but in Ned Kellys famous ‘interview’ he makes it clear that he made a run for it simply becasue he saw an opportunity. The issue of handcuffs came up later. He fled into a bootmakers shop and was cornered, but again, even though it was futile once again he violently resisted arrest, and once again boasted about it in the Jerilderie letter :

“with one well directed blow I sent him (Fitzpatrick) sprawling”

“Finding me a more difficult man to manage than they expected Lonigan seized me in such a manner – a cruel cowardly and disgusting manner – that he inflicted terrible pain on me, but still I would not surrender”

Kelly is here referring to Constable Lonigans use of the ‘squirrel grip’- squeezing of the testicles – in an attempt to subdue and place handcuffs on the enraged youth who characteristically later boasted about how violently he resisted. It didn’t seem to concern him that his futile resistance resulted in a 1 shilling fine for drunkenness being converted to an 85 shilling fine for assaulting police.

Perhaps it didn’t trouble him because by that time he had abandoned regular honest work and by his own admission had returned to fulltime lawbreaking. He later recorded in the Jerilderie Letter that because earlier in the year he had been wrongly accused by a landowner of being a cattle thief, he would become one to teach the man a lesson:

“I heard again I was blamed for stealing a mob of calves from Whitty and Farrell which I knew nothing about. I began to think they wanted me to give them something to talk about. Therefore, I started wholesale and retail horse and cattle dealing”(Jerilderie Letter)

This statement of Kellys is notable for two reasons: it’s a remarkably immature and transparent attempt to deny being responsible for his own behaviour, and secondly, it’s the opposite of what he and his supporters ever since have claimed, that police persecution was the cause of his descent into criminality. Here he is claiming it was some sort of payback in a dispute with Whitty, a fellow Irishman who arrived in Victoria with nothing, but became a successful landowner.

Ned Kellys criminal syndicate took advantage of the lack of any co-ordination between police forces on either side of the Murray, the isolated stock routes through harsh mountain ranges, and a network of local landowners whose support was paid for. Kelly declared that in 1877 he was living the life of a ‘rambling gambler’, moving stolen horses and cattle with altered branding in both directions across the Murray, using aliases and forged documents. Ned Kelly was known as Mr Thompson. As always, he boasted about his success as a stock thief, and was proud, as only criminals would be, of the fact that he ‘never was convicted of cattle or horse stealing’. In his world being a criminal and getting away with it was a badge of honour.

In fact, after investigation of thefts from Whitty and others, and from local selectors in what became known as the Baumgarten affair, in early 1878 warrants were issued at Chiltern for his arrest for horse stealing. The police were closing in.