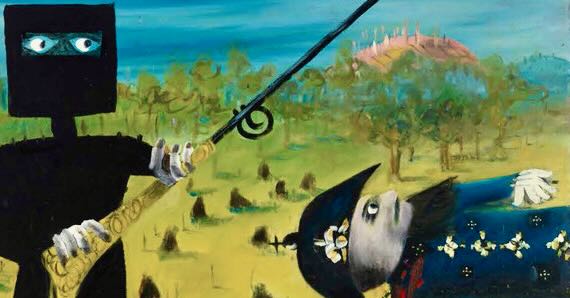 There’s one thing that I think pro and anti-Kelly factions should agree on about the events at Stringybark Creek: The Gang didn’t approach the police with a plan to kill them. An argument that they went there expressly with murder in mind can certainly be made from plenty of bits of available information such as the extensive damage to trees around the Kelly camp that indicate that for weeks they had been practising their marksmanship, and Ned Kellys own words, written the following year that “I was compelled to shoot them or lie down and let them shoot me”. I’ll return to this argument later.

But Kelly also claimed he went there just to disarm the police, that if he had wanted to murder them he could have done so from the safety of cover, and of course, he didn’t murder McIntyre when he easily could have. To me, disarming and not killing police is the more likely explanation of what the Gang had in mind that day.

What I think should be agreed on is that even Ned Kelly was sane enough to know that a plan to go and kill police in cold blood made absolutely no sense: prior to the confrontation at SBC nobody had been murdered, and though he was wanted for attempted murder, and faced serious Gaol time if caught and convicted, this wasn’t a capital offence, but killing police clearly was.

What seems to have been planned for Stringybark was that Kelly and the other three members of the Gang would arm themselves and go to the police camp, bail up and disarm the police, take their supplies and their horses, and send them packing.  Such a simple  mission – what could possibly go wrong?  In fact this plan is so full of holes  its pretty obvious that nobody made  even the slightest  attempt to carefully think it  through. For a start, they couldn’t have thought very much about what would happen if they had been successful and disarmed the police and sent them away – then what? All that would be achieved was the short-term thrill of having bested police, who then would have greatly escalated their efforts to capture the Gang and made life a whole lot more difficult for them.   Even if everything went off as planned, it could only have ever made their situation worse.  The entire idea was half baked, short-sighted and stupid. It was really just thrill-seeking, living in the moment, which of course is a favourite pastime of immature young men to this day.

They also hadn’t thought very deeply about the confrontation itself, about what might eventuate and how they would respond to the unpredictable. The biggest problem here was probably Ned Kellys inflated confidence in his own ability. He was blinded to the reality of what he was planning because his previous experiences of armed confrontations were robberies on the highway with Harry Power, and they were always successful. When confronted by armed bandits, the surprised and terrified, but untrained and unarmed travellers readily bailed up and handed over whatever the thieves wanted, without a fight, let alone a gunfight. Ned Kellys experience had taught him – wrongly as it turned out –  that an armed hold up was a piece of cake.

Ned Kellys contempt for police, and an immature and overblown sense of his own invincibility were a deadly mix when guns and testosterone are added in. He likely imagined that what he became used to seeing on the highway with Harry Power was what he would see again at SBC : instant submission to the terror of a loaded weapon aimed at your chest, and his complete domination and control of everything that would happen. But he lacked the wisdom to wonder if armed trained police out looking for him might react differently to unarmed and untrained travellers, and what he would do if they did. He hadn’t developed a Plan B, but if he had thought about it, he might have realised he had left himself with only one option if police reacted in an unexpected way: retreat or start shooting.  He didn’t even have the most basic Plan B , such as that if he had to start shooting his first one would be a warning shot. Instead, feeling invincible and foolishly overconfident he devised a thoughtless, reckless and dangerous plan based on his conviction that the police would do as he ordered them to, like travellers on the Highways always did.

I would guess that when they left their camp at Kellys creek heading for the Police camp at SBC, failure and disaster and even killing was far from Kellys mind. They took guns but were likely in denial about the possibility of ever having to use them. I imagine with hearts beating fast and adrenaline levels through the roof they would have been pumped with eager testosterone fuelled excitement at the prospect of humiliating the police and gaining a thrilling victory over them – but instead horrendous tragedy was just around the corner.

A few short hours later it was all over, Ned Kellys reckless gamble had collapsed almost instantly into total disaster and three policemen were dead. Nowdays this murderous shambles, entirely of Ned Kellys making  would be called a cluster-f*ck: the Kelly Gang were now multiple murderers on the run with death by hanging inevitable if they were ever caught. They had voluntarily thrown themselves from the frying pan into the fire.

Their only hope now was to stay on the run for ever, and try to devise a justification for the killings which might spare them from the noose if they were ever caught. What Kelly tried to do was blame it all on the police, writing in the Jerilderie Letter, “it is only foolishness to disobey an outlaw as any Policeman or other man who does not throw up their arms directly as I call on them knows the consequence, which is a speedy despatch to Kingdom come”.  As I mentioned above, he claimed to believe that he was “compelled to shoot them” or else “lie down and let them shoot me”. Kellys argument was going to be that he had been told that the police were coming to kill him, that he was going to be shot and have a gun planted on his corpse, that it was either kill or be killed. Over the years, various other elements, all untrue, have been added to this claim to try to strengthen it, such as that the police were in disguise, that they carried ‘body straps’, that they were heavily armed and that they were competing against each other for reward money.

The peculiar thing is that when he was eventually caught and went to trial, none of these arguments were presented.

But before then, while on the run, Kelly devised another delusional plan, but this time, unlike at Stringybark Creek where murder emerged accidentally, but entirely predictably out of the chaos, the Gang went to Glenrowan with the express purpose of murdering as many police as they possibly could. Once again Kellys half-baked badly thought out scheme collapsed in complete disarray right at the very beginning, and ironically no police were killed. Instead, three Gang members and two of their innocent prisoners died as the Police finally brought Kellys insane rampage to a fiery end. Another cluster-f*ck entirely of Ned Kellys making. Only people who have never thought about how disastrously these two adventures turned out could ever repeat the absurd idea that Ned Kelly would have made a great General. He was a dangerously reckless and careless fool.

5 Replies to “Stringybark Creek : What the hell was Ned Kelly thinking? ”